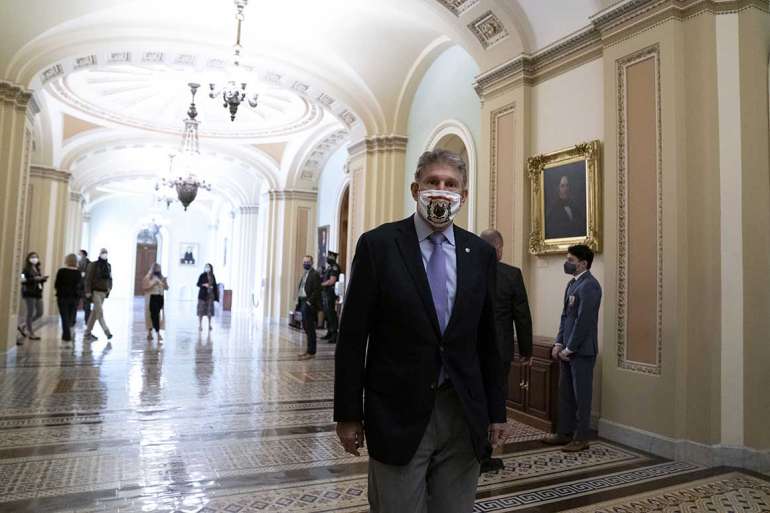 Congressional leaders are also holding their own coronavirus talks and will need to see the legislative text of the group’s work before weighing in publicly. Congress has not approved a new significant round of aid since April.

Leaders of the group said it’s now up to McConnell and Pelosi to decide what can pass both chambers of Congress as lawmakers scramble to wrap up the legislative session by Friday.

“What we’ve been able to do is to give to leadership, as they’re moving through in these final days, a ready-made, negotiated product,” said Sen. Lisa Murkowski (R-Alaska). “You’ve got your gift, take it.”

But the group’s presentation gets at the heart of the difficulties congressional leaders face in the coming days. Even the bipartisan coalition, in the end, could not find a way to marry the more controversial local funding and liability discussions with a broader relief deal, leaving it up to party leaders who have been in a stalemate over those issues.

“The best way to do that at this late date is to negotiate a four-corners agreement,” Sen. John Cornyn (R-Texas) said. “My understanding is they are looking at what the bipartisan group has come up with and a lot of it is good stuff, for potential inclusion in the year-end spending bill.”

Cornyn called the bipartisan proposal a “positive influence” on the ultimate deal, adding he’d be “shocked” if congressional leaders didn’t release text of a final deal by Wednesday. McConnell and Pelosi have both said they want to attach a stimulus deal to the $1.4 trillion omnibus measure Congress that has to pass by Friday in order to keep the government open.

“We’ve got to vote on this thing by Friday and get out of here,” Cornyn said.

McConnell has not commented directly on the bipartisan proposal, though it does meet his general framework after he relented on previous demands for liability reform in any new stimulus measure. He did not address it directly on Monday but did tout some provisions included in the compromise, including small business funding and money for vaccine distributions.

“It’s up to us. We decide. This is entirely within our control. I can speak for the Republican side. We want to make a law to agree where we can and help people who need,” McConnell said on Monday afternoon.

Democrats want the state and local funding though some have signaled they might be able to wait until next year, while conservative senators are mostly opposed to a new round of state aid.

The $748 bipartisan proposal includes an extension of current unemployment assistance for 16 weeks, with $300 in additional weekly unemployment benefits, $300 billion in small business relief, and $16 billion for coronavirus testing and vaccine distribution. The bipartisan bill also provides billions of dollars more in funding for emergency food assistance, education funding and relief for airlines, Amtrak and public transit.

Separately, Pelosi has continued to stay in touch with Treasury Secretary Steven Mnuchin about Covid relief negotiations, although the two tried for months to reach a broader deal on their own, to no avail. Mnuchin and Pelosi talked Sunday afternoon and plan to speak again Monday, according to her office. Pelosi last week publicly rejected an offer from the White House that would have included another round of stimulus checks but with less unemployment assistance, saying she’d prefer to focus on the bipartisan Senate proposal.

Pelosi wouldn’t say Monday whether she’s open to dropping Democrats’ demands for additional state and local funding. “I very much support state and local,” Pelosi said. “We are in negotiations,” she added when asked by reporters if it was still a “red line” for Democrats. Senate Minority Leader Chuck Schumer echoed her position and said he needed to see the legislative text of the centrist bill.

“Democrats remain committed to getting another round of emergency relief to the American people before the end of the year and in a robust, bold way because America needs it so badly,” Schumer said on Monday afternoon.

And there’s another issue: Sens. Bernie Sanders (I-Vt.) and Josh Hawley (R-Mo.) are demanding any legislation include direct checks to individuals, which would balloon the price tag. The bipartisan group’s legislation does not include a new round of checks, according to sources close to the talks.

In an interview, Sanders urged Pelosi and Schumer to reject the bipartisan bill and said Congress won’t go home for the holidays without approving new checks. And he said it would be a raw deal for Democrats to settle for the bipartisan group’s bill, which marries unused money from previous relief with around $200 billion in new spending.

“What kind of negotiation is it when you go from $3.4 trillion to $188 billion in new money? That is not a negotiation. That is a collapse,” Sanders said. “We cannot go home until there is strong unemployment benefits plus $1,200 per adult, $500 per kid for every working person and family in this country.”

Sanders and Hawley’s position could force a deadline crunch later this week. The government is set to shut down on Friday without action and congressional leaders are hoping to attach a stimulus package to the government funding bill. The closer Congress creeps toward the shutdown deadline, the more leverage individual senators have.