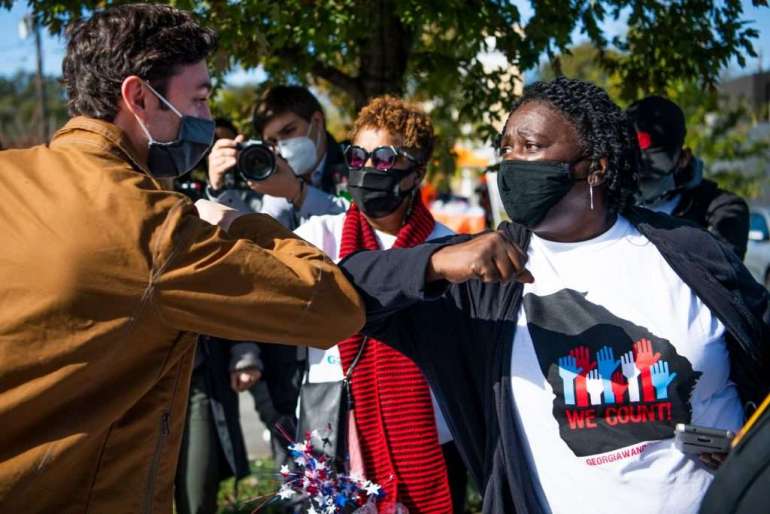 To those of us who believe that the Republican Party has essentially become a cult of personality hostile to our nation’s institutions, this preoccupation is not just frustrating; we believe it poses a danger to our democracy. Democrats can’t afford to neglect the multiracial coalition that saved them this year or they will lose more races and cede the American experiment to the GOP.

Had Democrats relied on the will of white voters alone in Arizona and Georgia, the majority of whom voted for Donald Trump, Biden would have lost. If the Democratic establishment’s plan to win the Senate races in Georgia is to take it for granted that people of color, young people, and women will vote for their candidates, they will come to regret it. The winning multiracial coalition of voters will not continue to come out to vote, risk their lives and literally save democracy if the people they put in power forget who got them there.

As progressive strategists, here are the facts about exactly who flipped Georgia.

Based upon available exit polling, Democrats won Georgia with a combination of white college-educated, Black and Latino voters. Black voters led the way with a whopping 88 percent of those voters supporting Biden; they make up 29 percent of all voters in Georgia. Latinos and white college-educated voters made up the rest of this winning coalition of voters with 62 percent and 57 percent of these voters turning out for Biden, respectively. Combined, these voters make up a large subsection of all voters in Georgia. Based on data currently available on the final vote counts, we are tracking an increase of about 200,000 more Black voters in 2020 than in 2016.

Add in increased Asian American and Latino Democratic participation, and a true Obama-era coalition emerges. This is thanks to the work of Black Voters Matter, New Georgia Project founded by Stacey Abrams, and other state-based organizers who turned out what we call high-potential voters — voters who don’t have vote histories, but if you talk to them, are likely to engage and lean Democratic. Tom Bonier, an adjunct professor at Howard University, noted that nationally, the county with the biggest swing toward Democrats this year was Henry County, Georgia. Hillary Clinton won it by 4 points, while Biden won it by 20. According to data compiled by TargetSmart, that swing was powered by Black voters in the state with nearly 50 percent of all the Black voters turning out for Biden. Across Georgia, Asian American and Pacific Islander early voters exceeded their total 2016 turnout by an astounding 58 percent.

What’s more, this was the most diverse electorate in Georgia history, and the youth vote share is also likely the highest we’ve seen in years. According to the liberal think tank NDN, Georgia Black youth supported Biden 90 percent to 8 percent. White youth supported Trump 62 percent to 34 percent.

In fact, according to Catalist, a voter data utility for the progressive community, it was Black voters who surged to repudiate Trump in Georgia. About 720,000 Black Georgians voted in 2016, and 1.2 million of them voted in 2020, while Biden’s margin over President Trump was less than 13,000 votes.

Regardless of what the pundits say, the data is clear: Democrats didn’t win Georgia thanks just to whites in the suburbs. It is, unequivocally, that Black voters and voters of color matter.

Democrats spent half a billion dollars to turn out white voters, 58 percent of whom ultimately ended up voting for Trump. Imagine if they’d spent a fraction of that money on communities of color; Latino and Black voters voted for Democrats at a significantly higher rate—65 percent and 87 percent, respectively.

Again, this was not an accident, and it was not merely an anti-Trump backlash: These results are the result of relentless organizing, over the course of years, by largely Black and brown activists working to expand the base with little help from the Democratic establishment. There is no room for error in Georgia on this point. If national Democrats want to send Jon Ossoff and Raphael Warnock to the Senate in 2021, they will need to follow the lead of local organizers who have created the blueprint for winning a multiracial coalition of votes. They must invest in culturally competent campaigning, led by organizations that have been doing the work in local communities for generations. To do this, campaigns must harness the power of the multiracial coalition of white college-educated, Black, Latino and Asian American voters.

This election proved that in places like Michigan, Wisconsin, Pennsylvania, Arizona, Nevada, and Georgia, you need people of color to win elections. The numbers speak truth to power — if Democrats invest in the multiracial coalition, they will exponentially increase their chances of winning elections.

Invest in us and we will continue to show up and save democracy.