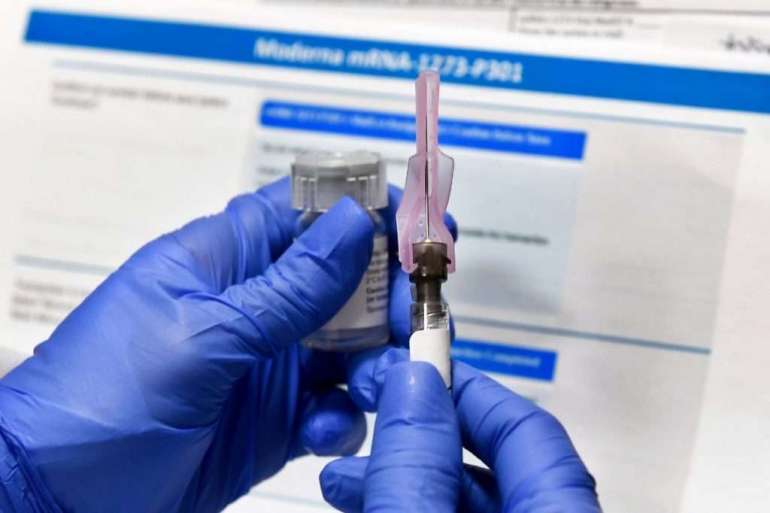 Nearly 6 million doses of Moderna’s vaccine will be shipped out to 3,285 sites across the country in the first week, General Gustave Perna, chief operating officer of the government’s vaccine accelerator Operation Warp Speed, said Monday. Between the Moderna and Pfizer shots, U.S. officials say there will be enough doses available this month for 20 million Americans.

Both shots use mRNA technlogy, an approach that sends instructions to cells to produce the antibodies to fight Covid-19 infection. Moderna’s is 94 percent effective after the second dose and especially effective against severe illness, according to the data, which indicate that all 30 cases of severe coronavirus occured in the placebo arm of the trial and none in the vaccine arm.

Moderna’s late-stage trial was aimed at determining whether the vaccine prevented symptoms of disease, rather than infection. But the shot may also begin to prevent infection after one dose, a promising signal that the vaccine could curb transmission of the virus, Moderna also suggested in an addendum to the documents it supplied to the committee. The company said that two-thirds fewer swabs were positive in the vaccine group compared to the placebo group before the second dose.

Roughly 40 percent of volunteers in the Moderna trial were over the age or 65 or had chronic medical conditions like heart problems and diabetes that made them more vulnerable to the virus. The data suggest the vaccine is more effective in younger people, at 96 percent efficacy, than among the 7,000 people 65 years and older, where it showed 86 percent efficacy.

The company also tried this summer to boost racial and ethnic diversity in its trial after criticism that early studies included mostly white volunteers. Nearly 37 percent of people in the phase III trial identified as people of color. Moderna also said that 82 percent of volunteers worked in high-exposure jobs, including health care workers who made up a quarter of trial participants.

Moderna’s promising results provide a crucial second option as U.S. officials and governments worldwide scramble to secure enough coronavirus vaccines for their populations. While the U.S. has inked deals with six manufacturers to secure 900 million doses at this point, several of those shots are still in trials and have hit roadblocks.

Sanofi and GlaxoSmithKline for instance, said after middling trial results last week that it is unlikely they will be able to supply vaccines before the end of 2021. The European drugmakers signed a deal to provide 100 million doses to the U.S. government.

AstraZeneca, which is slated to supply Warp Speed with 300 million doses, stalled trials this fall amid safety questions, but expects to file results in early 2021. But questions remain about which dose of their shot is best — and it still may not be as effective as the two first out of the gate, Pfizer and Moderna.