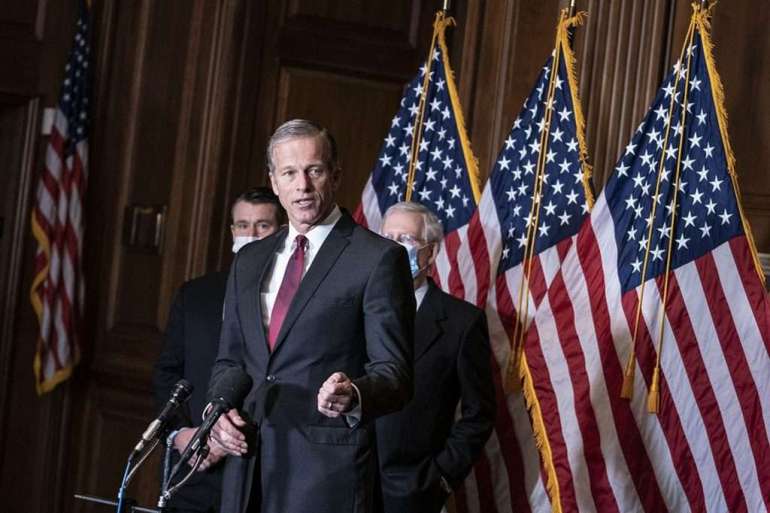 “I understand there are people who feel strongly about the outcome of this election,” said Senate Majority Whip John Thune (R-S.D.), the second-ranking Senate Republican. “But in the end at some point you have to face the music. And I think that once the Electoral College settles the issue today, it’s time for everybody to move on.”

Early voting is underway in the two Georgia runoffs that could decide the fate of the Senate next year. POLITICO’s James Arkin gives an on-the-ground look at what voters there are thinking.

Even as President Donald Trump continues to falsely claim he won the Nov. 3 election, the Electoral College officially certified Biden’s win Monday evening. Trump has also effectively run out of legal options in his long-shot bid to overturn the election, after the Supreme Court declined Friday to hear a case led by the Texas attorney general that would have challenged results in four battleground states. Most Senate Republicans notably steered clear of that lawsuit, unlike their House GOP counterparts.

For more than a month, only a small group of Republicans has been willing to say that Biden is the president-elect, despite a clear victory and massive barriers to overturning the election results. Others have suggested that the transition should begin or that the legal process should play out. But as the inauguration approaches, more Senate Republicans are saying it’s time to throw in the towel — even if most are not pressuring Trump for an outright concession.

Some House Republicans are still planning to wage a long shot challenge on Trump’s behalf when Congress counts electoral votes on Jan. 6, but that isn’t likely to get much traction in the GOP-led Senate. Sen. John Cornyn (R-Texas), who is close to Senate Majority Leader Mitch McConnell, said that would be a “bad mistake.”

“There comes a time when you have to realize that despite your best efforts, you’ve been unsuccessful,” he said. “You’ve got to have a winner and you’ve got to have a loser. So I think once the president’s legal arguments … are exhausted, then certainly Joe Biden is on the path to the next president of the United States”

Yet even at this late stage, some Senate Republicans refused to acknowledge Biden’s victory Monday, noting that Trump is still pursuing his bid to overturn the election in court.

“Let’s see where the remaining legal challenges go. But it’s a very narrow path,” said Sen. Lindsey Graham (R-S.C.), the chair of the Judiciary Committee. Graham added that despite his support for Trump’s efforts, he is prepared to support Biden’s nominees for secretary of state, Pentagon chief and Treasury secretary.

But some senators who have helped push some of Trump’s unsubstantiated claims of voter fraud are inching closer to acknowledging reality.

“Certainly walking down that path, isn’t it?” Senate Homeland Security and Governmental Affairs Committee Chair Ron Johnson (R-Wis.) quipped. Johnson is still preparing to hold a hearing later this week on alleged “irregularities” in the election.

Republicans are trying to walk a fine line, as the president continues to falsely claim that the election was stolen. While most admit privately that the president lost, Republicans are wary of provoking Trump and losing his support in the upcoming runoff races in Georgia that will determine whether they keep their Senate majority. They’re also counting on Trump to sign an end-of-the year stimulus deal and avert a government shutdown before he leaves office.

Sen. John Barrasso (R-Wyo.), another member of GOP leadership, told reporters that asking about Biden’s status was a “gotcha question.”

Sen. Steve Daines (R-Mont.) said Trump still has every right to “get to the bottom” of any purported election discrepancies and suggested it would be weeks still before he calls Biden the president-elect.

And Sen. Jim Inhofe (R-Okla.), when asked if Biden is the president-elect, gave a terse “no.”

McConnell has also yet to issue a public statement on the Nov. 3 election results. He has his weekly press conference on Tuesday where he will surely be asked about the matter; previously, he has said he will let the process play out before commenting. At a recent press conference, Biden grinned when asked if he had spoken with the Senate majority leader.

Senate Minority Leader Chuck Schumer berated McConnell and Republicans on Monday for declining to call Biden the president-elect, describing it as a “national embarrassment.”

“The Republican Leader of the Senate still has not referred to Joe Biden as president-elect,” Schumer. “Will he change his tune now that the Electoral College has once again confirmed his victory? Will the rest of my Republican Senate colleagues do the same?”