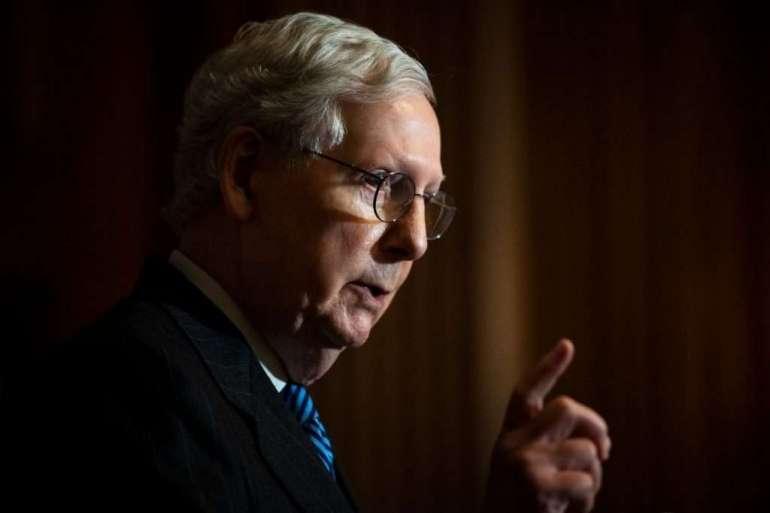 As the day crept on, it became clear that finishing negotiations, finalizing text and voting in both chambers by late Friday became a tougher and tougher task. Lawmakers are beginning to get antsy to go home, but congressional leaders privately informed their members of the possibility of working into the weekend.

Congressional leaders have floated the idea of a stopgap funding bill to keep the government open while they wrap up legislative work this weekend, but lawmakers and aides are still hoping they don’t have to resort to that. House Minority Leader Kevin McCarthy (R-Calif.) said that negotiators were down to “the fine details that we’ve got to get done, but those are the most important ones.”

“We’re gonna get there,” declared Senate Majority Leader Mitch McConnell (R-Ky.) as he left the Capitol on Wednesday evening.

Senate Majority Whip John Thune (R-S.D.) said the proposal would likely include direct checks to individuals of $600 to $700 and a weekly unemployment boost of $300 through March. That framework is expected to keep Democrats on-board despite losing out on state and local funding.

The proposal would also include roughly $325 billion in small business relief, including $257 billion for the Paycheck Protection Program that helps employers keep on workers who otherwise might go on unemployment, according to a person familiar with the negotiations.

Senate Minority Leader Chuck Schumer also said negotiators are close to an agreement. He said that his party would push for a larger deal next year when Joe Biden assumes the presidency.

“It’s not a done deal yet. But we are very close. For Democrats, this has always been about getting the American people the relief they need,” said Schumer, describing the urgency of addressing the current “emergency” situation after nearly eight months without a new tranche Covid stimulus. “We Democrats would have liked to go considerably further.”

The direct checks will be far less than the $1,200 per person included in the previous relief package, and the unemployment bonus benefits will be below the level of a now-expired $600 weekly unemployment boost in order to keep the cost of the bill in check. On a private Senate GOP conference call Wednesday, McConnell explicitly linked the need for direct payments to the special election in Georgia. “Kelly [Loeffler] and David [Perdue] are getting hammered,” McConnell said, according to several sources on the call.

President Donald Trump is pushing to send out checks to Americans, and has backing from liberals, such as Sen. Bernie Sanders (I-Vt.), and Republicans, such as Sen. Josh Hawley (R-Mo.).

But notably no senators on either the left or right were explicitly threatening to hold up the bill ahead of the shutdown deadline, though Sanders and Hawley both said they’d like to see bigger checks. Still, Sanders called it a “good start,” and Hawley called it “good movement.”

And House progressives also signaled they could get on board with the deal. Congressional Progressive Caucus Chair Pramila Jayapal (D-Wash.) asked House Speaker Nancy Pelosi about the size of the checks on a private caucus call Wednesday morning but did not indicate her group would oppose the bill, as they had been discussing the night before.

Schumer is pushing for as much as $17 billion for a Save Our Stages provision to help idled venues. Republicans and some Democrats are concerned it will come at the expense of a fund to help restaurants devastated by the pandemic, but Democrats said Schumer wants to help both restaurants and entertainment venues.

The deal would also include large sums of funding for vaccine distribution, education, transportation and health care. And lawmakers are ready to get out of town for the holidays after a breakneck lame duck.

“Some of the our folks who typically might in circumstances like this want to slow things down are, I don’t think, inclined to do that,” Thune said. He said it would still be possible for the House and Senate to pass the massive package before the Friday deadline and not necessitate another stopgap funding bill.

The negotiations moved rapidly. The four congressional leaders — McConnell, Pelosi, McCarthy and Schumer, met late into the night Tuesday in the Capitol with Treasury Secretary Steven Mnuchin joining by telephone.

The negotiators are racing to notch an agreement that would ride alongside a year-long, $1.4 trillion funding bill that needs to pass by Friday. Pelosi wants a vote by the end of the week, but the situation is still unsettled.

As of Wednesday evening, the timing for moving a massive government funding-relief deal remained elusive. McConnell gave Republicans a general rundown of the state of play on the GOP conference call during lunch but said negotiations weren’t finished, according to people listening. Separately, Pelosi and Schumer talked to Mnuchin for 45 minutes around lunchtime but aides in both parties said discussions were ongoing.

The two most contentious items — funding for state and local governments and a liability shield for businesses — have been left out of the agreement. The state and local funding was a priority for Pelosi, Schumer and other Democrats, while Republicans wanted the liability shield. McConnell suggested dropping both, and a bipartisan group that offered Congress a framework for the leadership talks also jettisoned the two contentious provisions.

This emerging compromise does not include that pot of money as originally envisioned but Democratic negotiators say they have secured other aid to states in the bill. Republicans have vowed to fight for a liability shield and Democrats for more state and local aid next year when Biden is sworn as president and pivots to confronting the United States’ precarious economic situation.

“The stimulus package is encouraging. It looks like it’s very, very close and it looks like there are going to be direct payments. But it’s a down payment,” Biden told reporters Wednesday. “It’s very important to get done and I compliment the bipartisan group on working together to get it done.”