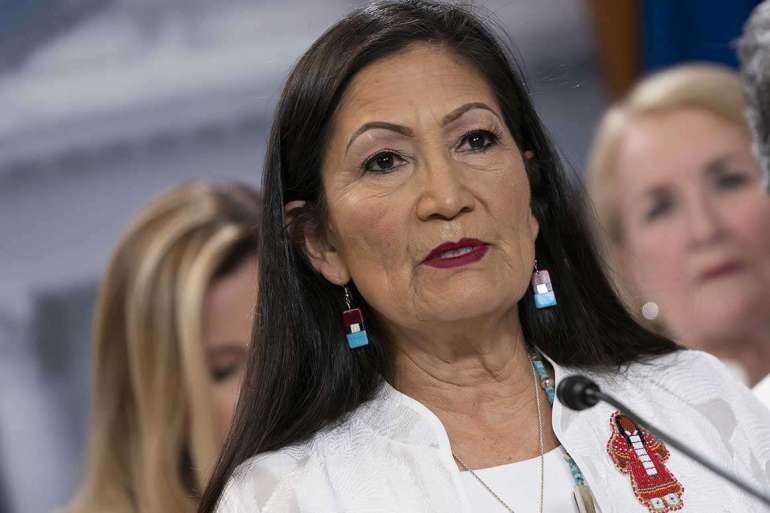 Pelosi’s statement appeared to be designed to calm fears in her party that tapping a third House Democrat for the administration would hamper her ability to move legislation through the chamber. With Reps. Marcia Fudge and Cedric Richmond also set to join the administration, Pelosi’s majority could shrink to six seats until the vacant Democratic seats are filled.

News of her appointment comes after people familiar with Biden’s transition team said he plans to nominate former Michigan Gov. Jennifer Granholm to lead the Energy Department, former Obama EPA chief Gina McCarthy to head his new White House climate change office and North Carolina environmental regulator Michael Regan to head the EPA. Along with Pete Buttigieg as Transportation secretary, that team will lead the Biden administration’s effort to tackle climate change, which the incoming president has made one his top goals.

Haaland’s selection positions Biden’s Interior Department to build on the budding alliances between tribes and environmental groups that have been formed in recent years to battle fossil fuel projects like the Dakota Access pipeline, expand land conservation and keep water in overdrawn rivers. An elevation of tribal interests and rights could affect a range of decisions, from the high-profile fight over drilling in Alaska’s Arctic National Wildlife Refuge to negotiations that are formally starting next year over how to states, tribes and the country of Mexico should share the Colorado River’s dwindling supplies.

A member of New Mexico’s Laguna Pueblo people, Haaland brings a major outside voice to a Biden Cabinet so far dominated by former Obama officials. Before being elected to Congress in 2018, she started a small business, put herself through school with the help of student loans and food stamps and led the Democratic Party in New Mexico, helping flip the state house to Democratic control.

Haaland won her House seat in part by promising to focus on renewable energy legislation. and she has championed such efforts as a member of the House Natural Resources Committee. She has been a consistent voice against government support for new oil and gas pipelines and other fossil fuel infrastructure, and filed a House resolution supporting policies that would put 30 percent of U.S. lands under federal protection by 2030.

The Sunrise Movement and Justice Democrats, two environmental groups that helped develop the Green New Deal resolution, called her a “fierce ally of our movement.”

“Deb and I sit next to each other on Natural Resources,” Rep. Mike Levin (D-Cali.) said of Haaland’s nomination. “I know how dedicated she is, how exceptional a member she is and she would be a great addition — and historic addition — to a Biden administration.”

Interior will be one of the key departments tasked with implementing Biden’s plans to shift the country away from fossil fuels and toward renewable energy. It manages the 500 million acres of land owned by the federal government — about a fifth of the total U.S. landmass — and decides what use it will be put to.

Biden’s Interior Department is expected to swiftly move to reinstate Obama-era rules that forced energy companies to shore up their wells and pipelines to stop leaks of methane, a potent greenhouse gas that is the main component of natural gas. Early acts would also likely include following through on Biden’s pledge to halt new permitting for fossil fuel development and reversing Trump’s moves to shrink national monuments.

Instead, the energy industry expects Biden’s Interior to focus on developing wind and solar energy projects on public land. Just as importantly, the department could also work more closely with local governments, particularly in the West, to allow electric transmission lines to cross public lands to better connect those renewable power sources with end users.

It could also move quickly to reverse a Trump-era effort to force Bureau of Land Management employees to move from their D.C. headquarters to Colorado, a move that was seen as a way to dilute the agency’s oversight.

“The BLM headquarters move has to be addressed on day one,” said Nada Culver, vice president for public lands and senior policy counsel at the Audubon Society. “I think you have to have D.C. headquarters again and have to lead folks back. As a symbol of the way the agency has been dismantled, discredited, and just generally dissed, [the Colorado office] has to go.”