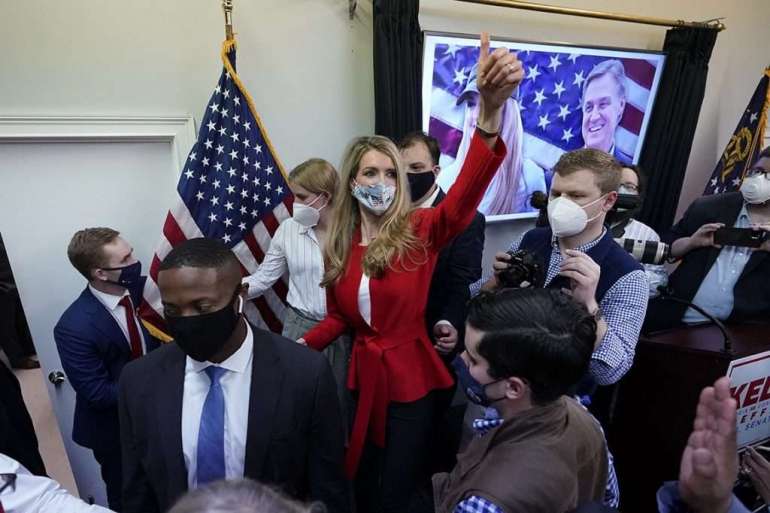 Given that they are currently in the majority, there’s pressure for the GOP to show that a Republican majority under a President Joe Biden won’t be total gridlock. Provided they hang onto at least one seat from Georgia, they will have the majority under Biden for at least two more years.

Republicans believe their two incumbents, David Perdue and Kelly Loeffler, will get a significant boost from a new stimulus law after getting hammered by Democratic challengers Jon Ossoff and Raphael Warnock for opposing relief checks. On Wednesday, Senate Majority Leader Mitch McConnell (R-Ky.) repeatedly told reluctant Republicans that President Donald Trump wants stimulus checks — and that they will boost Perdue and Loeffler significantly in Georgia, according to people familiar with the conference call.

Democrats “are arguing that the president-elect needs some partners to advance his progressive agenda. If we can demonstrate through passage of this Covid package that we can work together in an atmosphere of divided government, that seems to defeat their argument,” said Sen. Todd Young (R-Ind.), who runs the Senate GOP’s campaign arm.

Sen. Thom Tillis (R-N.C.), who just won reelection while under attack for his party’s handling of the coronavirus, said “incumbents are going to be blamed as a part of the problem” if Congress falls short.

Warnock and Ossoff have been hammering Loeffler and Perdue for months over the lack of action on a stimulus package. With direct payments in the mix this time around, Ossoff has been hitting Perdue over his previous opposition to stimulus checks that were part of Congress’ pandemic relief measure approved in March.

Covid relief is also the subject of a new ad the Democrats’ campaigns are running in Georgia, featuring Biden making a direct plea for Warnock and Ossoff. In the ad, Biden details his stimulus plan and adds that he needs Warnock and Ossoff in the Senate “to get this done.”

Loeffler and Perdue are not part of the bipartisan group of lawmakers that prompted the most recent negotiations and have missed Senate votes this month as they campaign for their political lives. But Loeffler has been in regular contact with McConnell, according to an aide, and said Wednesday she would fly back to D.C. to vote for a stimulus bill as soon as it’s clinched.

“Both Kelly and David benefit from getting this over the finish line,” added Sen. Mike Braun (R-Ind.). “They’re part of the institution that’s got responsibility. So I think it is important that we get it done.”

Though Democrats have a shot in Georgia, they would risk losing out on today’s opportunity if they ignored the compromise in front of them and bet on winning back the Senate to drive toward a far larger package. Because if they lose either of those two Senate races, McConnell will ultimately determine whether a relief bill can be considered on the Senate floor next year.

Democrats want a much bigger deal but have been having discussions about how they may not get another chance if Georgia doesn’t go their way, said one Senate Democrat familiar with party dynamics. But they also want to provide Biden a clear deck when he takes office in January, so he’s not mired in relief talks that have stalled for months and confronted with an even worse economy and health crisis.

“It will be hard to get the [GOP] majority to do another one. That’ll be a challenge,” Sen. Bob Casey (D-Pa.) said.

Murphy, however, cautioned that Biden’s long-standing relationship with Republicans means it is “entirely possible that he’ll be able to convince Mitch McConnell and Republicans to come to the table on additional stimulus and other issues.”

Still, Republicans are plainly uneasy about committing to another round of stimulus in just a month. After passing the most recent tranche of aid in April, McConnell and other Republican called for a “pause.” The same is likely true in January if Republicans control the Senate and have just approved nearly $1 trillion in coronavirus aid.

“A lot of it probably depends on what happens in Georgia,” said Senate Majority Whip John Thune (R-S.D.). “If we address the critical needs right now and things improve next year as the vaccine gets out there and the economy starts to pick up again there may be less of a need.”

“What this really is all about is whether or not people want Republicans to be able to control the Senate and negotiate with a Biden administration and slow down the far left,” argued Sen. Mike Rounds (R-S.D.).

Still, there’s more on the line in Georgia than the immediate question of whether Biden will find cooperation in Congress for his next economic stimulus package. Whoever controls the Senate will determine the longer arc of how quickly the country recovers from the devastating health and fiscal impacts of the coronavirus, and Democrats are worried that a Biden White House will end up fighting constantly with a Republican majority on all of his priorities.

“At this juncture so many people are struggling,” said Sen. Catherine Cortez Masto of Nevada, chair of the Democratic Senatorial Campaign Committee. “There’s going to be a stark difference still on the issues that are important around not just Covid but health care in general [and] the economy.”

She said Georgians are looking for “long-term solutions” rather than just a single bill.

Even as the political climate is ripe for compromise on a stimulus package, some say a coronavirus deal will not make or break Loeffler or Perdue. For one, the senators have blamed Democrats for filibustering targeted GOP-led relief bills in the fall, muddying the waters of who’s responsible for the long-stalled negotiations.

And while the Georgia Senate candidates are focusing their message on the need for more aid, their races will ultimately be nationalized into whom do they want running the Senate: Chuck Schumer or Mitch McConnell.

“I’ve seen the comments made that it’ll affect Georgia. I don’t think anybody knows,” said Sen. John Kennedy (R-La.). “I’d trust one of those late night psychic hotlines before I trust some of the polls.”