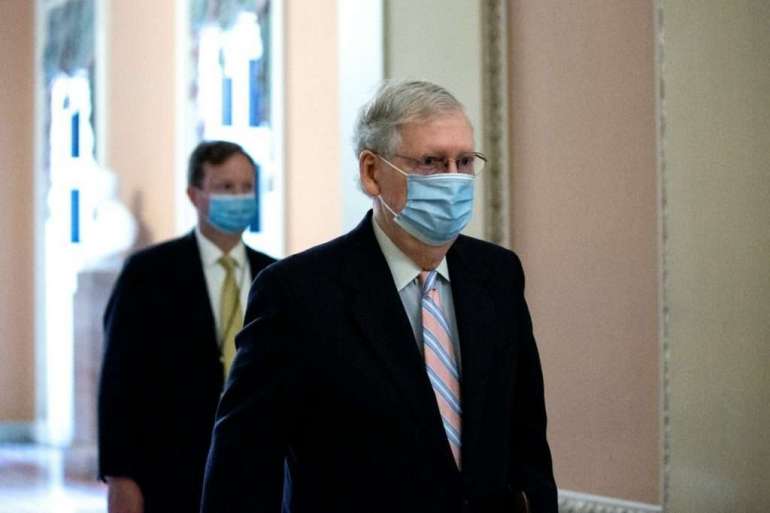 The dash to prevent a government shutdown caps a day of lame duck drama on Capitol Hill in which congressional leaders failed to resolve several outstanding disputes over disaster aid, Federal Reserve emergency lending and unemployment assistance. Frustrations also boiled over with rank-and-file members, who vented about being left out of the negotiations only to be expected to vote on a nearly $2 trillion package sometime this weekend that no one will have fully read.

“This is ridiculous,” said Rep. Jahana Hayes (D-Conn.). “We should have a deal — we should’ve had a deal a long time ago. It’s unconscionable that we’re even here the weekend before Christmas.”

Congressional leaders were still hoping to reach an agreement to address the debilitating pandemic as soon as Friday night after months of stalemate. And the stopgap bill moving through Congress only funds the government through Sunday, setting up another critical deadline and more pressure to compromise.

Speaker Nancy Pelosi and Senate Majority Leader Mitch McConnell spoke by phone around 1 p.m. and agreed to try to wrap up negotiations within the next three to four hours. But that afternoon deadline came and went without an announcement of a deal.

After meeting with McConnell later Friday, Majority Whip John Thune (R-S.D.) said the state of play was increasingly tenuous. He said announcing a deal on Friday “would be a triumph of hope over experience” and that even funding the government through a stopgap bill for a couple days could be a “heavy lift.”

“There are lots of individual senators and there are members on both sides who are resistant to the idea of doing another” short-term spending bill, Thune said. “But if there’s good progress on the deal and it looks likely that we’ll be able to announce something soon, hopefully the Christmas spirit will kick in.”

The issues hindering Congress are complex and multi-layered. Democrats are blaming GOP Sen. Pat Toomey’s insistence on winding down a key Federal Reserve program as the primary impediment to finishing negotiations, but Republicans say Democrats are just looking to send states and cities more funds through a backdoor method.

Hawley briefly threatened to stop a short-term spending bill over concerns about whether direct payments were in the bill, but relented at 5 p.m. after being briefed by GOP leaders.

Sen. Ron Johnson (R-Wis.) blocked Hawley and Sanders from passing a new round of $1,200 stimulus checks, exposing the rift in the GOP about how to handle the pandemic’s sweeping economic impacts. Johnson also said he would not stop a stopgap spending bill while Sanders was noncommittal.

Though McConnell said on Friday morning that he’s “even more optimistic now than I was last night that a bipartisan, bicameral framework for a major rescue package is very close at hand,” the finger-pointing at Toomey (R-Pa.) in the frantic negotiations and complaints by Hawley suggested a tough road ahead for congressional leaders.

Despite the last minute disputes, lawmakers say they’re hopeful a deal is still within reach.

“This is just the normal pain associated with getting to a final solution,” Sen. John Cornyn (R-Texas) told reporters.

But that hasn’t stopped the blame game from continuing in full force in the meantime.

Senior Democrats said an agreement was “within sight” until Toomey and the GOP made a new ask on the Fed’s emergency lending programs. Toomey has pushed for similar provisions since July, but Democrats argue his latest proposal is more restrictive. Republicans are concerned the emergency lending program will be used to help state and local governments, which they have repeatedly objected to.

The current version of Toomey’s plan would prevent the emergency lending program established by the CARES Act from continuing next year and would also bar the central bank from starting any similar program, according to a draft viewed by POLITICO.

The Federal Reserve has said it would like the emergency programs to continue operating until the economic crisis has ended. Brian Deese, President-elect Joe Biden’s pick to be National Economic Council director, also released a statement Friday afternoon urging negotiators to keep the Fed program.

But Toomey pushed back in a statement Friday afternoon, saying in a statement that his language affects “facilities that received CARES Act money expire at the end of the year … cannot be re-started or duplicated without authorization by Congress. Any statement to the contrary is inaccurate.”

The early skirmishing was an ominous sign for one of the most pivotal days of Congress this year.

A shutdown that starts at midnight Friday and only carries into the weekend — while embarrassing for Congress — likely won’t have much of an effect. But a shutdown that drags into early next week gets more complicated and could affect services and cause furloughs.

A senior administration official said the Office of Management and Budget is communicating with federal agencies about the possibility of a shutdown at midnight, instructing agencies to hold off on shutdown procedures for now while Congress looks to close out a deal.

While congressional leaders have agreed to the broad outlines of a package that would deliver $600 stimulus checks to many individuals and children, $325 billion for small businesses and a $300 weekly unemployment boost, finalizing the deal has proven stubbornly difficult.

Johnson raged against that framework as he blocked Hawley’s proposal, suggesting conservatives will not appreciate more than $2 trillion in spending being dropped in their laps at the last minute.

“I’m certainly lodging my objection to what’s barreling through here. The train has left the station on the package that’s being negotiated right now that is way too big,” Johnson said on the Senate floor.

McConnell once again vowed that the Senate would not leave without a deal on a spending package that will marry the coronavirus bill with a $1.4 trillion omnibus government funding measure through September. He said Friday that the four leaders have been “working around the clock.”

Regardless of what happens with the immediate government funding obstacle, both chambers of Congress are set to work through the weekend to finish off the lame duck session. It’s a fitting finale for a Congress that opened with the longest government shutdown in history.

In addition to the Fed fight, disaster relief, direct payment eligibility and money for entertainment venues were also among the final sticking points for negotiators. Then there’s the issue of drafting hundreds of pages of legislative text and getting it through the House and the Senate, where one individual senator can slow everything down.