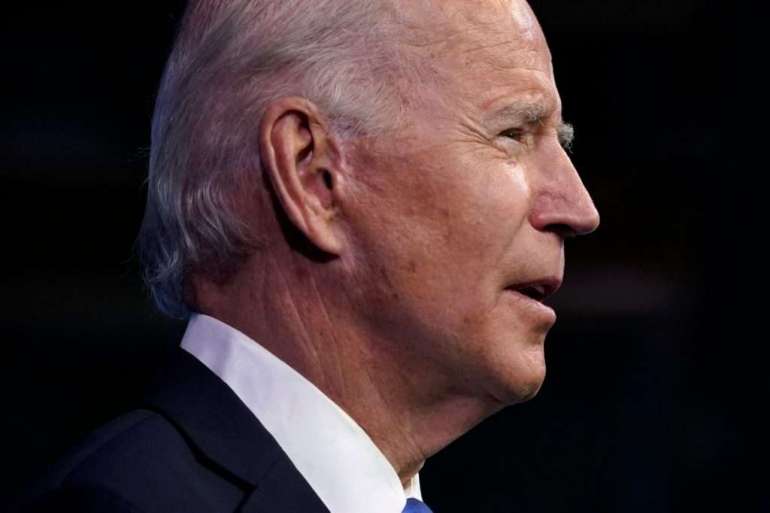 Some 65 percent are women or people of color and there are “zero with corporate ties and backgrounds,” said Yasmine Taeb, a senior fellow at the progressive Center for International Policy.

“This is the first comprehensive and coordinated effort by the left to influence the transition to appoint progressives to national security and foreign policy positions,” she added. “The candidates being recommended are not only qualified but are forward-looking, with no corporate ties or revolving door issues which has been a concern with respect to many of the national security appointments being made by the incoming Biden administration.”

The effort was organized by Taeb and Alex McCoy, political director at Common Defense. POLITICO agreed not to publish the full roster, which includes the professional and personal information of the individuals recommended for jobs.

Some are being recommended for specific roles in the Biden administration.

For example, Matt Duss, the top foreign policy adviser to Sen. Bernie Sanders (I-Vt.), is being put forward as deputy national security adviser or special adviser to the secretary of State. Trita Parsi, co-founder of the Quincy Institute and a former United Nations official, is being recommended to oversee Middle East affairs on the National Security Council. Kate Gould, a national security adviser to Rep. Ro Khanna (D-Calif.), is being put up for senior policy adviser for the U.S. Mission to the United Nations.

Mike Darner, executive director of the Congressional Progressive Caucus, should be considered for a position in policy development at the White House, the groups recommend.

They’d like to see Alison Friedman, executive director of the International Corporate Accountability Roundtable and an expert on human trafficking who served in the State Department, as Biden’s undersecretary of State for civilian security, democracy and human rights.

And another recommendation is for Noah Gottschalk, a senior policy adviser at Oxfam America, to be named deputy assistant secretary of State overseeing the bureau of population, refugees and migration.

A number of others on the list are well-known in defense and foreign policy circles: Bruce Riedel, a scholar at the Brookings Institution, is a former deputy assistant secretary of Defense for the Near East and South Asia. Joe Cirincione is the former president of the Ploughshares Fund, a leading advocate for nuclear disarmament. And Heather Hurlburt is director of the new models of policy change for New America’s Political Reform program.

Gordon Adams, who was an official in the White House Office of Management and Budget and has become a vocal critic of increased defense spending, is also on the list.

“This is quite unprecedented,” Adams, who is a fellow at the Quincy Institute, said in an interview. “It says there are, in fact, an impressive number of people who could legitimately fill those jobs and question the dominant perspective on foreign policy and national security.”

“There is a seriousness with which the progressive wing of the Democratic Party is trying to shape alternative ways for the United States to engage in the world,” he added. “These perspectives are real and they have begun to acquire a legitimacy because the world has changed. Is migration on the security agenda or not? Is climate change on the security agenda or not?”

Other veterans include Paul Pillar, a former senior intelligence official who questioned the intelligence used to justify the invasion of Iraq in 2003, and Steve Simon, a former National Security Council official and specialist on terrorism.

“This is a serious, deep bench of progressive practitioners who ought to be serious participants in a Biden effort to reshape how America engages a changed world,” Adams said.

Many other job candidates are up and coming players in progressive national security circles — such as Iram Ali, a former adviser to Sen. Elizabeth Warren’s (D-Mass.) presidential campaign who also worked for Iraq Veterans Against the War, and Keane Bhatt, a policy adviser to Sanders who has worked on legislation to cut off arms sales to Saudi Arabia over human rights abuses.

“If the Biden administration is serious about fighting on behalf of the American people, they must appoint political leaders who are representative of working Americans across the country — not defenders of big business with major conflicts of interest,” said Carolyn Fiddler, communications director at Daily Kos, a liberal internet forum.

Separately, the Center for International Policy, in conjunction with Rep. Raúl Grijalva (D-Ariz.), is delivering to the Senate a petition with more than 200,000 signatures demanding that the Senate not confirm any Cabinet picks or other senior officials for executive branch agencies who have been corporate lobbyists.

“Trump’s administration, for example, has appointed 281 lobbyists,” it reads. “That’s four times more than Obama had appointed six years into office. That is completely the OPPOSITE of ‘draining the swamp’. Make no mistake, though Trump obviously favors corporate hacks to benefit the wealthy, this is certainly a bipartisan issue.”

“That’s why we are demanding our Congressional leaders oppose the confirmation of any nominee to an executive branch position who is currently or has been a lobbyist for any corporate client or officer for a private corporation, in this or any future administration,” the petition adds.