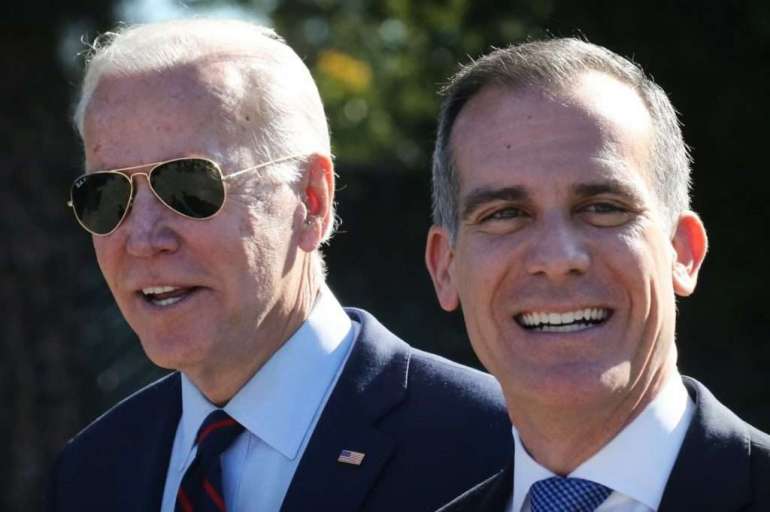 For a Democrat who entered the presidential election cycle with high prospects, it marked the end of a hard fall.

“For a long time, there’s been this aura around Eric Garcetti that he’s somebody with a great future, that he will ascend to great heights of power,” said Darry Sragow, a longtime Democratic strategist in Los Angeles. “And in the world of politics, that means that everybody’s nice to him and lots of people like to be around him. And then that feeds the sense that he’s somebody of consequence.”

Sragow said, “Sometimes that turns out to be true, and sometimes things don’t work out that way, at least for the time being.”

Two years ago, Garcetti was preparing for a widely-expected run for president, raising money for Democrats across the country and positioning himself — and mayors like him — as an antidote to dysfunction in Washington, D.C.

Today, he presides over a city that has been overwhelmed by the coronavirus and is beset by a pandemic-induced budget crisis, homelessness and a rise in violent crime. A public corruption probe has engulfed City Hall. And by next month, Garcetti will be deposed in a lawsuit accusing a former top aide of sexual harassment. His 9-year-old daughter, Maya, has tested positive for coronavirus, and Garcetti and his wife are in quarantine.

If there was any good news for Garcetti at all, it was the prospect that he might finally get a break from the Black Lives Matter-aligned activists who had been banging drums every day for weeks outside of his residence to protest a potential appointment.

“He ain’t gonna be secretary of s—,” Melina Abdullah, a Black Lives Matter organizer, said before Garcetti’s announcement. Once it came, she added, “We’re glad to not see him failing forward.”

Garcetti framed his decision as a choice. “As the administration reached out to me about serving,” he said, “I let them know early this week that my city needs me now, and that I want to be here and that I need to be here.”

But multiple Democrats close to Garcetti said he would have left for the administration if the offer had been good enough. Instead, Biden picked Gina McCarthy, the former Environmental Protection Agency head, as his domestic climate policy chief, and Buttigieg for Transportation.

Garcetti, a friend of Buttigieg, once joked that he was “the older, straighter Pete Buttigieg.” But Buttigieg is heading into the Cabinet. And like Rahm Emanuel, the former Chicago mayor who had been campaigning for Transportation secretary, Garcetti is on the sidelines.

“Pete took Eric’s air all the way through this thing,” said Doug Herman, who was a lead mail strategist for Barack Obama’s 2008 and 2012 campaigns and a senior adviser to Garcetti in his first mayoral run in 2013. “In the campaign, in terms of running, in terms of being the voice of the cities,” and now “in terms of getting a Cabinet position that Eric was mentioned for.”

It’s hard to look at the arc of Garcetti’s last two years through any lens other than missed opportunity. In the run up to the presidential primary, Garcetti was once considered a more credible contender than Buttigieg or several other mayors and former mayors considering campaigns. The mayor of the nation’s second-largest city, the now-49-year-old of Mexican-Italian-Jewish descent represented a new generation of Democratic leadership from outside the Beltway.

And Garcetti didn’t lack ambition. He traveled extensively, starting a nonprofit group of mayors, labor and business leaders to fund investments in cities around the country. And he generated goodwill by using his connections to Hollywood money to help raise money for state Democratic parties at a time when party operations in many states were thin.

Ultimately, Garcetti balked at the presidential campaign, saying being mayor was “what I am meant to do.” But even in his demurral — and even with his problems in Los Angeles — Garcetti appeared to have punched his ticket to D.C. An early endorser of the former vice president, Garcetti co-chaired Biden’s campaign and helped to vet candidates for vice president.

“Look, he did everything that he was supposed to,” Herman said. “He made public endorsements … He stuck his neck on the line with fundraising. He was there in a real way, and early. When it wasn’t cool to be on Team Biden, Eric was there.”

Had Biden reciprocated, a likely special election to replace Garcetti would have upended politics in Southern California, drawing a wide field of contenders for mayor. Los Angeles City Attorney Mike Feuer, a former state lawmaker, has already announced that he is running for mayor in 2022 and would almost certainly have run in a special election. City Council President Nury Martinez and Councilmen Joe Buscaino and Mark Ridley-Thomas, a former state lawmaker and county supervisor, were among the potential candidates, as was Councilman Kevin de León, the former Democratic state Senate leader who ran unsuccessfully against Sen. Dianne Feinstein in 2018.

Now all of them will wait. And so, too, will Garcetti, whose likeliest path forward will be as a mid-term appointment by Biden.

As the Biden administration evolves, Herman said, Garcetti will likely be the “first person off the bench … I definitely don’t think this is end of the road for him.” And former Los Angeles County Supervisor Zev Yaroslavsky said Garcetti’s prospects aren’t dimmed.

“This is not a time to write Eric Garcetti’s obituary,” said Yaroslavsky, who now directs the Los Angeles Initiative at the UCLA Luskin School of Public Affairs. “Biden remembers his friends, and Garcetti is his friend.”

Garcetti will need to keep it that way. Through a spokesman, Garcetti declined to comment. But if not for a later appointment, it is unclear where Garcetti could go. He’s not among the field of Democrats considered likely to be appointed to replace Sen. Kamala Harris, the vice president-elect, and Los Angeles mayors don’t have a rich record of success on their own in statewide campaigns. No Los Angeles mayor has ascended to the governor’s office.

The compounding problem for Garcetti is that it is also difficult for Angelenos — apart from election season, when California’s money beckons — to keep the attention of D.C. With Los Angeles far from the nation’s political and media centers, East Coast dwellers view politicians here as the “JV squad,” said Antonio Villaraigosa, the former Los Angeles mayor.

“They seem to think that East Coast cities a fraction of L.A.’s size and importance are more significant,” he said.

Still, Villaraigosa said, “In a couple years, when [Garcetti’s] term is over, I really do think someone like Biden would be open to him.”

Jeremy B. White contributed to this report.