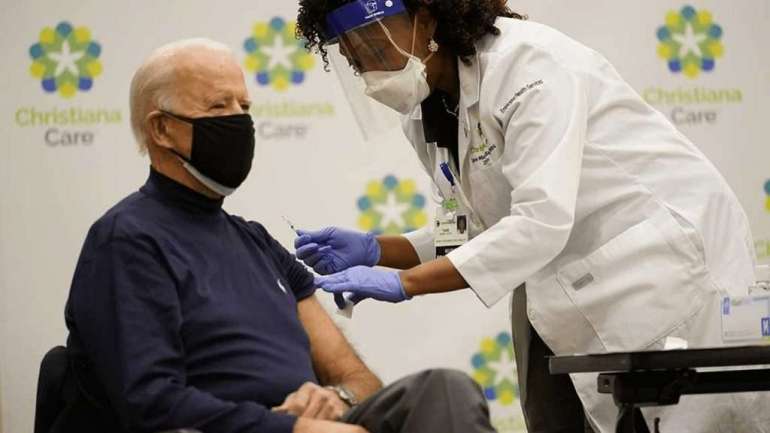 Richmond’s diagnosis is one of the closest known brushes with the deadly virus for Biden, who at 78 is at a heightened risk of complications from the disease and has gone to considerable lengths to minimize the risk of exposure during the presidential campaign and ensuing transition.

“We’re still in the thick of this,” Biden said as cases, hospitalizations and deaths continue to mount across the country. “There’s millions of people out there that are going to need this.”

The Bidens received shots manufactured by Pfizer, one of two immunizations granted emergency authorization by the Food and Drug Administration earlier this month.

The two join Vice President Mike Pence among the list of political leaders who have received shots in recent days. Pence and his wife, Karen, got vaccinated during a televised event on Friday morning alongside Surgeon General Jerome Adams, with the vice president promising to the country that “hope is on the way.”

Noticeably absent from that list: President Donald Trump. The White House has been circumspect about when the president — who tested positive for Covid-19 at the beginning of October and was subsequently hospitalized — would get vaccinated or whether he would do so in public, despite urging from the head of the Trump administration’s signature vaccine development operation and others.

Trump also nixed plans to have White House staffers be among the first to obtain access to the vaccine, preferring that shots instead be reserved for other priority groups. Other top government health officials have also had to wait for their turn to get the highly anticipated vaccine.

POLITICO first reported earlier Monday that Anthony Fauci, the nation’s top infectious disease expert, Human Services Secretary Alex Azar and National Institutes of Health Director Francis Collins are among those scheduled to receive doses of the vaccine manufactured by Moderna at an NIH event on Tuesday. NIH had yet to receive a single shipment of the vaccine as of Friday, despite playing a meaningful role in developing Moderna’s vaccine, which the FDA authorized for emergency use Friday night.

Both use a similar mechanism to stimulate the body’s immune response, and shipments of both products have begun to go out throughout the country, where state and local governments are overseeing their individualized distribution plans for allocating their allotments at the ground level.

Broadly speaking, the first batch is being reserved for frontline health care workers and people in some of the highest-risk groups, though there has been some consternation about politicians and certain nonmedical health care employees receiving doses over other staffers while supplies remain scarce.

Several members of Congress have confirmed receiving the first of two rounds of the shot — which are administered weeks apart — both as part of an effort to combat vaccine hesitancy and to ensure continuity of government if disaster struck the Capitol.

Adams, the surgeon general, said on Monday there is “symbolic value” in elected leaders getting vaccinated if it bolsters support for the shots in certain groups that have been disproportionately affected by the virus’s toll.

“We need them to have the confidence to get vaccinated,” he said on Fox News. “It’s not the vaccines, it’s the vaccination that matters.”