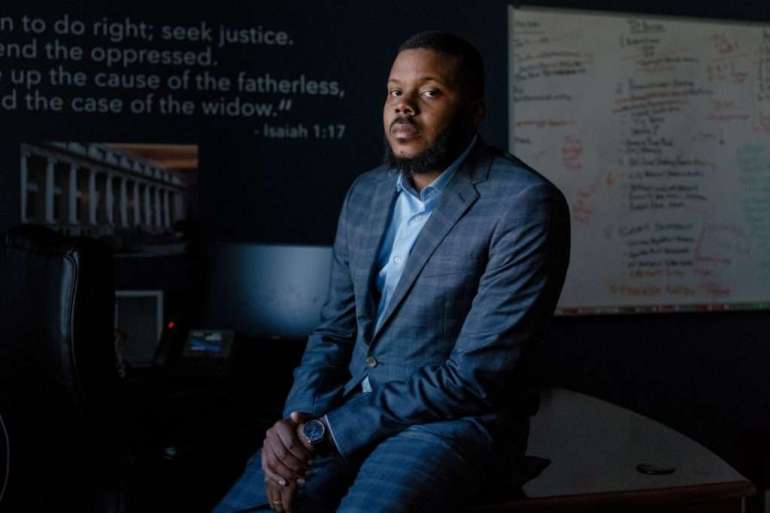 In another city — or at another time in Stockton — the presence of 209 Times might not have mattered. But the guardrails of civic discourse have eroded in recent years. The local newspaper, The Record, has been butchered by budget cuts, with the newsroom listing just five reporters on its website, for a city roughly the size of Pittsburgh. The newspaper’s building is for sale, and San Joaquin County supervisors last month were considering buying it to turn into a homeless shelter. TV stations based in nearby Sacramento do little to fill the void.

In a “media desert,” said former state Sen. Michael Machado, a Democrat from nearby Linden, “there’s no fact check there, and [209 Times] have got a big following because they talk red meat.” And Stockton—with relatively low rates of literacy and educational attainment—is especially vulnerable to what it has to say.

“It seems like every community I’ve worked in … there’s always a small minority that for whatever reason are motivated to tear down the city,” said Bob Deis, a former Stockton city manager. “What’s not common is that they burrow into the information source for a community and get the readership that 209 [Times] gets. That’s not common.”

Deis called it a “recipe for weird anomalies.” And Lincoln, though not the perpetrator, was the beneficiary. His supporters suspect the blog was responsible for significantly wounding Tubbs, dropping him to within striking distance of a challenge. In a race in which just over 100,000 votes were cast, swaying even a few thousand votes can have an impact.

But the 209 Times was far from the only thing working against Tubbs. What Deis called a “recipe for weird anomalies” is putting the dysfunction in Stockton’s political landscape mildly. And it goes beyond any blog. When Deis arrived at City Hall in 2010, the city and its police officers union were embroiled in a labor dispute so bitter that the union had erected billboards around the city with body counts, blood splotches and the warning, “Welcome to the 2nd most dangerous city in California—Stop Laying off Cops!” In a move that city officials said smacked of intimidation, the union bought the house next door to his. The councilman whom Tubbs unseated in 2012 has been involved in secession talks to split his south Stockton neighborhood from the rest of Stockton. And Tubbs’ predecessor as mayor, Anthony Silva, pleaded no contest last year to a conflict-of-interest charge resulting from a long-running investigation of his handling of public money. He brought a mace and a gladiator helmet to his State of the City address one year, putting on the helmet and urging the crowd to “come to war with me” on the city’s behalf.

Though Silva wasn’t on the ballot this year, in addition to Tubbs and Sanchez, there were six other candidates, including Ralph Lee White, a former councilman who, demonstrating his willingness to take a drug test back in the 1980s, urinated in a bottle in front of reporters in the mayor’s office before a council meeting and left it on the press table.

One former senior administrator said that if he ever wrote his memoirs, “it would have to go in the fiction section.” Another called Stockton a place where rivals “kick you in the nuts.” And the city is particularly hard on incumbents. Frustrated with perennially high crime rates and poverty, the electorate is so restless that the last mayor to win a second term, Gary Podesto, did so 20 years ago.

In some Democratic-dominated cities, Tubbs would have won just by virtue of his party affiliation, but not in Stockton. The Democratic but working-class city is less progressive than cities along California’s coast, and also less progressive, on balance, than Tubbs. Earlier this year, Tubbs was the lone advocate of a mask ordinance to address the spread of the coronavirus, which was rejected by the council 6-1. His supportive comments on a proposal by a friend, Lange Luntao, to eliminate the local school district’s police force angered law enforcement, a powerful political force in Stockton. Critics derided the gun violence intervention program Tubbs supported as “cash for criminals.”

And in his own city, the initiative that made Tubbs famous nationally may not have helped him politically at all. Across the country, the idea of a universal basic income has gained some purchase, with Andrew Yang thrusting it into the presidential primary and the coronavirus pandemic leading Pope Francis to suggest that “this may be the time to consider a universal basic wage.” It’s one of the few policies that knits together progressive and free-market think tank intellectuals. But in Stockton, the program was a pilot that involved only about 125 recipients. It was easy for critics to dismiss it as a vanity project, or a strange new kind of handout that—unlike bigger public works programs that take political work to build—never benefited enough people to create a constituency.

Luntao, who lost his seat on the school board last month, said Tubbs was “fighting for bold, progressive ideas that people in Stockton are just beginning to wrap their heads around,” and that it’s possible “we moved too fast for Stockton … that there was an understandable or predictable backlash to change.”

But it’s also possible that, on the things that mattered most, change did not come quickly enough. The number of homeless people in the city tripled from 2017 to 2019, with encampments in the city’s sloughs and beneath the city’s overpasses—the smoke from fires sometimes billowing over the roadway. Crime is down this year about 20 percent over the previous year, through October, but murders were up, and the city, per capita, is consistently one of the most violent in the nation.

“There was like a beta test character to some of his initiatives,” said Michael Fitzgerald, a retired longtime columnist for The Record. “And meanwhile, Stocktonians were preoccupied with the same old issues: crime, gun violence, blight, the homeless. They wanted to see progress on those fronts.”

It wasn’t just the big things that hurt Tubbs. In north Stockton, lawn signs that read, “Save Swenson, Stop Mayor Tubbs,” went up after Tubbs objected to public subsidies for a city golf course and the city considered—before abandoning—the idea of turning the land over for development. On the Miracle Mile, near the University of the Pacific, Tubbs became a focal point for frustration surrounding a drawn-out code enforcement case that kept a theater building and surrounding businesses closed.

Nothing Tubbs did could have solved crime or homelessness in Stockton. And it was easier to pin ulterior motives on him when his own prospects looked brighter than the city’s. Mario Gardea, president of the Stockton Professional Firefighters Local 456, which along with the police union supported Lincoln, said, “I don’t know a person who has been around Michael Tubbs who doesn’t think that this is just a steppingstone to something else. And in all honestly, we would have loved to have gotten behind Tubbs and championed him to bigger and better things, but you’ve got to take care of things here first.”

Ever since Tubbs had been told by his incarcerated father, at 12, that for a Black man in America, “it’s either prison or death,” he had resolved to “defy expectations.” And he had. But expectations of a mayor—as almost any mayor of a major city will tell you—are almost impossibly high. And in an election that was primarily a referendum on Tubbs, he fell short.

“I think there are a lot of people in Sacramento and in Washington who forget that voters in some of these places care about core issues, and we fall in love with some of these big-ticket ideas,” said Andrew Acosta, a Democratic strategist in Sacramento who has run races in Stockton, including former Mayor Ann Johnston’s. “Universal basic income probably didn’t matter to a ton of people in Stockton because they weren’t benefiting from it. It was good in academic circles to kick around, but I’m not sure that was the No. 1 issue that voters in Stockton were talking about.”

For a mayor, he said, “It’s potholes and bullshit, right? Now you’re in potholes, COVID, bullshit, wear a mask, all of this stuff that becomes a toxic brew … It wasn’t like Tubbs had a series of scandals that were front-page news. It wasn’t like the litany of tried-and-true hits on an elected official. It was a ‘death by a thousand paper cuts’ kind of deal.”

Acosta was one of several people who described Tubbs’ loss as an expression of the crabs-in-a-bucket theory about a place trapped by its own low self-image. Once someone pulls himself up, “everybody grabs their tail and pulls them back in,” Acosta said. “It’s hard to say there wasn’t a little bit of that here.”

Or as Fitzgerald put it: “It’s not just that Tubbs was gone a lot or that the 209 Times was characterizing him as not being there, him looking past Stockton and all that. I think there’s that envy factor in this town. I mean, shouldn’t people look up to you when you graduate from Stanford and you have all this wonderful, innovative stuff going on in the city with such a focus on the economically disadvantaged? But a lot of people didn’t … Stockton has a culture of mediocrity, and it’s really difficult to transcend it.”

He said, “Stockton is a witch’s brew of potentially poisonous politics, as Tubbs just found out.”

Tubbs might have seen it coming if he’d looked more carefully. His internal polling, he said, suggested he was winning by about the same margin by which he ultimately lost. But other Democrats who were polling Tubbs’ favorability saw weaknesses early on, and the result of the primary, in which Tubbs handily beat Lincoln but failed to hit 50 percent of the overall vote, was a clear sign he had a problem.

Podesto, the former mayor, noticed it. “If you’re an incumbent and you don’t have 50 percent in the primary, you’ve got to start wondering why there are so many people who don’t support you,” he said.

Machado said Tubbs failed to sell his projects to voters, “playing to another audience rather than realizing what he should be looking at at home.” And Bob Benedetti, a retired political science professor at University of the Pacific in Stockton who has studied that city’s mayors for about 20 years, said Tubbs suffered from the pandemic’s sidelining of a door-to-door campaign.