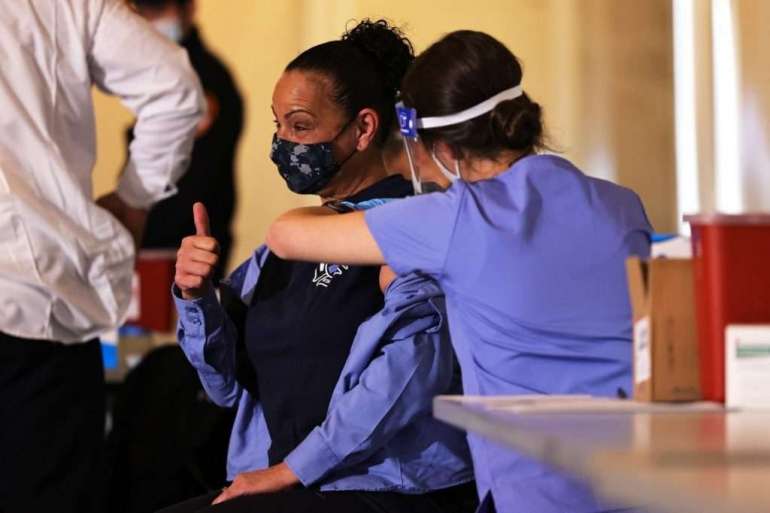 Black, Latino and Native Americans were a focal point in census outreach nationwide as local leaders sought to ensure underrepresented communities weren’t also undercounted, which could cost cities and states their share of the trillions of federal dollars up for grabs.

This time the stakes of getting the word out are life and death.

The virus has taken a major toll on the nation this year, infecting at least 17 million Americans and killing more than 318,000. But its wrath has been uneven: Minorities have borne the brunt of the coronavirus, facing hospitalizations and deaths at a higher rate than their white counterparts while also being disproportionately impacted by job losses, evictions and food insecurity.

However, the people who worked the ground game of the census have addresses, phone numbers and a sense of what community leadership people listen to — essential markers that avoid having to start the vaccine push from scratch.

The Greater Auburn-Gresham Development Corporation in Chicago was active in getting residents from the mostly Black communities it serves to sign up for the census.

“Now we have a Covid team — eight members pounding the pavement, going door-to-door” alongside with health care professionals to encourage residents to sign up for Covid-19 testing and to be part of the Covid vaccine trials, said Carlos Nelson, CEO of the nonprofit. “You can see the results. There are lines to get tested now in the community.”

His organization is also part of Chicago Mayor Lori Lightfoot’s Racial Equity Rapid Response Team, which meets this week to figure out how to get those same Black and brown communities to take the vaccine once it’s made available to the general public.

Health care workers and elderly people living in long-term care facilities began receiving the first of two shots last week, a source of optimism in a year largely defined by a racial reckoning, economic devastation and a bitter presidential election. To bring Covid-19 under control, medical officials, including Dr. Anthony Fauci, the nation’s top infectious disease expert, say at least 70 to 80 percent of the population need to be immunized.

A Kaiser Family Foundation poll released last week found double-digit increases in the percentage of Black and Hispanic Americans who say they will definitely or probably get vaccinated since September. That left slightly more than a quarter of Latinos saying they definitely or probably won’t go through with it, bringing them in line with the average across all populations, while more than a third of Black people surveyed said they weren’t interested in vaccination.

Their mistrust in government and the health care system is rooted in the legacy of medical racism. Hundreds of Black men were experimented on without their consent in the 40-year Tuskegee syphilis study, for example, and thousands of people of color were targeted in a mass forced sterilization campaign in the 1900s. In modern medicine, disparities remain: Black women are three times more likely to die from childbirth than white women in the U.S.

Nelson’s group in Chicago knows a vaccine push will be more complex than pitching the census.

“It’s not as easy as the census, where you’re saying, ‘Hey, sign up,’” he said. “It’s about understanding people’s ideas, perspectives and feelings. We have a large population of seniors who lived through the period of the Tuskegee project. It’s a deeper conversation.”

That hesitancy is already putting pressure on every level of government to deploy celebrities, prep ad campaigns and put high-ranking officials like Vice President Mike Pence on camera getting the vaccine to dispel doubts, particularly as misinformation circulates.

“There is a way to be able to engage people in-person safely, and we need to utilize those mechanisms,” Michigan Lt. Gov. Garlin Gilchrist II said in an interview. “We also need not leave any kind of media or medium on the table. We need to be comprehensive. This is all hands on deck.”

But having people on the ground meeting face-to-face — albeit six feet apart — will likely be a key driver, said Rep. Raul Ruiz (D-Calif.), a medical doctor and incoming chair of the Congressional Hispanic Caucus.

“Oftentimes in underserved communities,” he said, “the same people that are in the space of reaching out and engaging with community members in order to foster community development and resources by being counted in the census are the same players who work in nonprofits, in organizing and mobilizing health care resources in those communities.”

Ruiz said the CHC plans to use its members to mount a national campaign through media and grassroots outreach, and engage with President-elect Joe Biden’s incoming administration to ensure there are people who understand the community and its barriers.

Community centers across Chicago that offered free masks and food donations amid the pandemic started including information about the census. Those same sites are now making plans to pivot their messaging to focus on the vaccine.

Dr. Helene Gayle, who co-chaired the study used by the CDC to determine how to roll out the Covid-19 vaccinations, said using existing formulas from previous mass vaccination efforts like the 2009 H1N1 influenza campaign or the census will be central to the immense, monthslong effort ahead.

“Extensive community engagement that builds on trusted relationships, especially in areas that have been hardest hit, is essential,” said Gayle, a 20-year veteran of the CDC who is now CEO of the Chicago Community Trust. “Community-based organizations and other partner organizations — including hospitals, pharmacies, faith-based organizations, community centers and schools and universities — can support community outreach and foster accountability.”

Funding vaccination awareness campaigns, however, is likely to be an issue for many cash-strapped cities and states despite Congress approving new vaccine funds this week.

“We have pivoted. We just don’t have the funding for it yet,” said Deborah Williams, a community outreach specialist at Habilitative Systems Inc.

The group is already working to get the word out about the vaccine to Chicago’s African American community using the same email list it used to contact residents about the census.

The state of Illinois spent $48.4 million on census outreach. Last week, Gov. J.B. Pritzker said the state would approach Covid-19 vaccinations in Black and brown communities with the same energy.

“We want to make sure people who may be avoiding getting vaccinated because they hear some information that’s false about it, that they have their concerns addressed and that they actually get vaccinated,” he said. “We’re going to do everything we can from a communication perspective.”

Rep. Chuy Garcia (D-Ill.), who represents a large Latino community in Chicago, is part of Illinois Unidos, a grassroots organization formed in the early days of the pandemic to get accurate information out about Chicagoans who had Covid-19. Over the summer, the organization transitioned to help get Latinos registered for the census. And now it’s helping get the word out that vaccinations for the coronavirus are safe and necessary.

“It’s a delicate issue,” Garcia said. “It needs to be communicated through most effectively trusted community partners and organizations. And they should be involved in the distribution efforts to ensure, like the census, that hard-to-reach communities adopt the vaccines.”

Lawmakers and health experts acknowledge the historical legacy of racist health care practices. But they also understand they must work with trusted partners to heal those wounds and ultimately save lives.