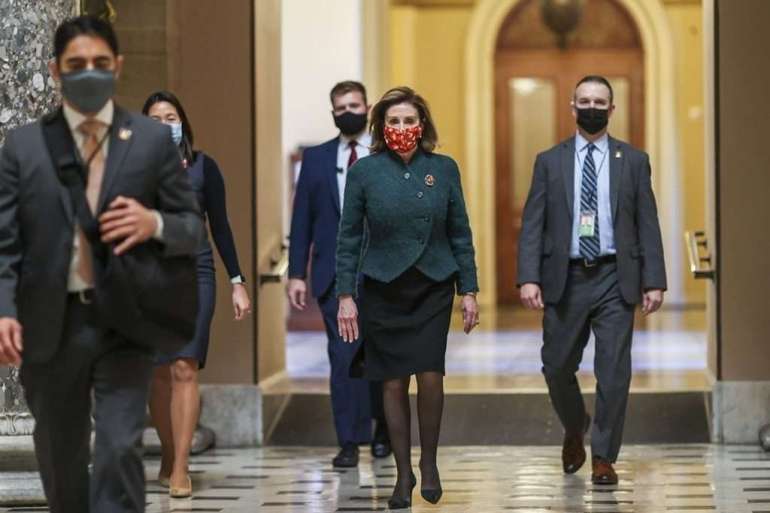 “We could’ve passed the bill four days ago but our colleagues on the other side went against the president’s wishes and blocked it,” House Ways and Means Committee Chairman Richard Neal (D-Mass.) said Monday.

Action now turns to the Senate, where it’s unclear if the chamber will even take up the House proposal, despite Trump insisting Sunday night he had secured an agreement from Republican leaders to do so. Senate Minority Leader Chuck Schumer will try to pass the House bill by unanimous consent Tuesday but Republicans are expected to object. Many GOP senators have previously resisted higher stimulus checks.

Unless there’s cooperation from all 100 senators, it would take several days to set up a roll call vote on the proposal and it would need to garner 60 votes. That’s a steep path toward approval — and it’s all occurring during what should be a holiday break for Congress.

But even if Democrats cannot secure higher payments for the public, Trump has handed them an opportunity to seize a politically popular stance and divide the GOP in the process. Just 44 House Republicans voted for the larger checks, with 130 opposed.

“The president of the United States has put this forth as something he wants to see,” Speaker Nancy Pelosi said before the vote. “I hope that view will be shared by the Republicans in the Senate.”

President-elect Joe Biden also weighed in on the issue Monday, telling reporters he was in favor of boosting the checks to $2,000. Trump was unusually quiet on Monday, with the only reported sightings of the president occurring at his golf course in West Palm Beach.

In a press conference Monday, Schumer said Trump needs to be much more vocal in demanding Republican support if he wants to get the stimulus boost enacted.

“These Senate Republicans have followed you through thick and thin,” Schumer said. “To the president: talking is not enough. Act. Get on the phone and get those Republicans in the Senate to support $2,000 in relief.”

In a sign that the bigger checks are gaining some favor among conservatives, Sen. Marco Rubio (R-Fla.) endorsed the $2000 payments as the House voted: ”I share many of my colleagues’ concern about the long-term effects of additional spending, but we cannot ignore the fact that millions of working class families across the nation are still in dire need of relief.”

Still, Democrats expect, many Republicans will use the cost increase as a justification for not backing the bill. Increasing the direct payments to $2,000 would cost about $464 billion, up from the roughly $160 billion now, according to a congressional estimate released Monday.

A handful of Republicans, including Ways and Means Ranking Member Kevin Brady (R-Texas), spoke out in opposition to the bill, citing the added expense or saying the money could be better spent elsewhere in the economy.

The House was already scheduled to be in session Monday to dispatch another Trump-related wrinkle — the president’s veto of the annual defense policy bill. The bill, which has been signed into law for nearly 60 years straight, passed both chambers earlier this month with veto-proof majorities. If the House and Senate are successful this week in bucking Trump, it will be the first veto override of his presidency.

Late Monday, Sen. Bernie Sanders (I-Vt.) said he would block Senate consideration of the veto override until Senate Majority Leader Mitch McConnell agreed to bring the House’s stimulus check bill up for a vote. The odd couple of Sanders and Sen. Josh Hawley (R-Mo.) joined together to push for $1,200 stimulus checks during the coronavirus relief negotiations earlier this month.

The House stimulus vote on Monday caps off an unusually frenetic week in Washington, a town that even for its unpredictable political gambits is usually quiet over the Christmas and New Year holidays.

A week ago, Congress finally broke an eight-month logjam to pass the desperately needed aid bill after days of drama and hard-fought negotiations. Lawmakers quickly jetted out of town only to be blindsided mid-week by a video Trump posted on Twitter railing against the bill.

The ambush left Washington in limbo for several days, as the president continued to criticize the direct payment amounts negotiated by his own Treasury Secretary, Steven Mnuchin, and the foreign aid levels requested by his own White House.

The move also teed up a game of chicken with congressional leaders, who refused to haul lawmakers back to Capitol Hill to address Trump’s demands and began making contingency plans in case the president allowed government funding to lapse Monday at midnight.

The House first tried to pass the bill boosting direct payments on Christmas Eve via unanimous consent but Republicans objected. Over the weekend, Trump continued to rail against the relief package only to finally sign it late Sunday after days of lobbying by some of his closest congressional allies, including Sen. Lindsey Graham (R-S.C.) and House Minority Leader Kevin McCarthy.

While Trump avoided a government shutdown, his delay caused at least a temporary lapse in critical unemployment benefits to millions of struggling Americans; the programs expired the day after Christmas and were renewed in the relief package.