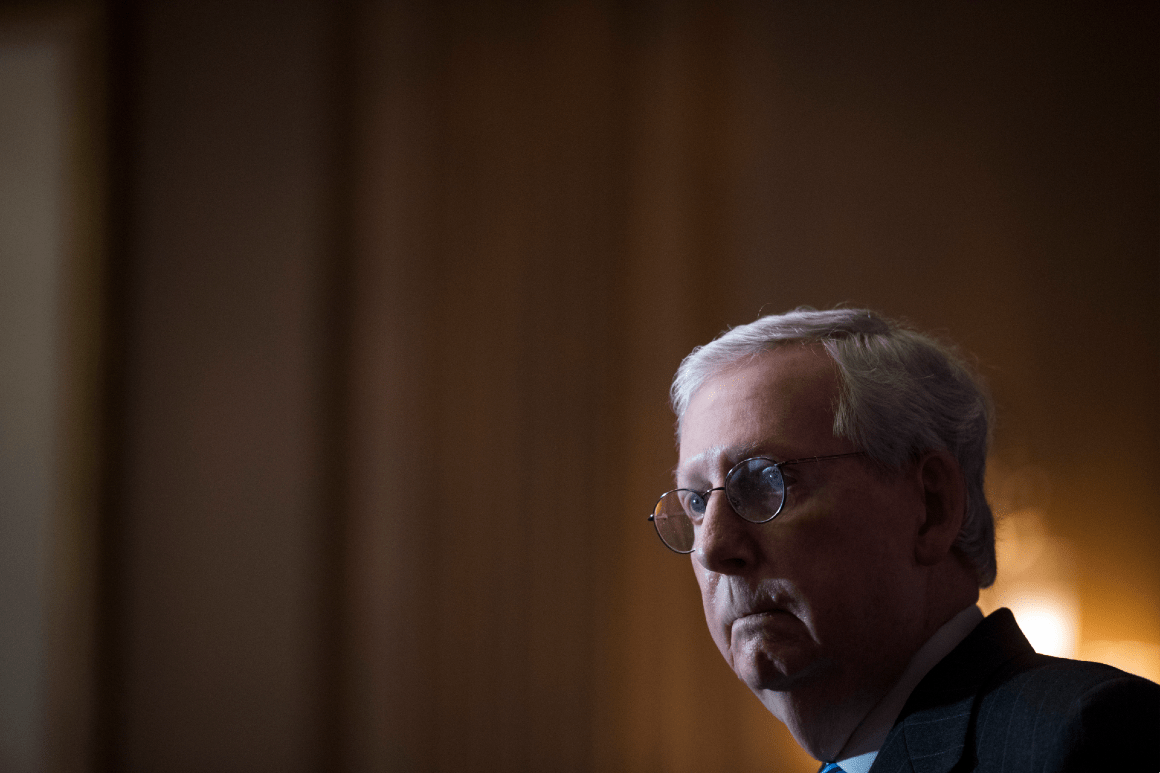 “Senator McConnell knows how to make $2,000 survival checks reality and he knows how to kill them,” said Senate Minority Leader Chuck Schumer. “If Sen. McConnell tries loading up the bipartisan House-passed CASH Act with unrelated, partisan provisions that will do absolutely nothing to help struggling families across the country.”

For now, McConnell is prioritizing action on overriding Trump’s veto of a defense bill, which could take place after New Year’s Day if Sen. Bernie Sanders (I-Vt.) continues to deploy procedural hurdles until he gets a vote on $2,000 checks. And Republicans are divided over the checks, with some speaking up in support but others complaining about increasing the debt or that the income thresholds for the new checks are too high.

After speaking with McConnell for several minutes after the chamber shuttered for the day, Sen. John Cornyn (R-Texas) said Congress has spent $4 trillion on the pandemic and should concentrate more on the $900 billion package it just approved that included $600 checks. He said he didn’t support the House-passed bill as a standalone proposal to boost those checks to $2,000.

“There’s still some discussions, whether it could be coupled up with something else,” Cornyn said, suggesting a liability shield that Democrats oppose could be paired with the larger checks. “This is just opportunistic on the part of the House. They’ve got an issue and unfortunately it seems to be drowning out all the other good stuff we’ve done.”

Meanwhile Sen. Jim Inhofe (R-Okla.) said the $2,000 amount is too high and Sen. Susan Collins (R-Maine) raised concerns about whether the checks needed to be targeted more to frontline workers and working-class Americans. Those comments, along with McConnell’s caginess on Tuesday about the path forward cast major doubt whether the GOP-led Senate will triple the size of those $600 checks as Trump demands.

In a floor speech, McConnell acknowledged Trump’s demand to increase payments, limit legal protections on tech companies and investigate election fraud as a condition for signing the $900 billion stimulus bill on Sunday. But he did not make an explicit commitment to tackling those issues as the 116th Congress comes to a close.

“Those are the three important subjects the president has linked together. This week the Senate will begin a process to bring those three priorities into focus,” McConnell said as he tried to set up a veto override vote on the annual defense bill for Wednesday.

Trump responded to McConnell’s move to block Democrats’ proposals with rage on Twitter: “Unless Republicans have a death wish, and it is also the right thing to do, they must approve the $2000 payments ASAP.” He also called for ending tech companies’ legal protections.

Cornyn said he opposed rolling the tech fight into the discussion over stimulus. Asked about Trump’s tweet, he responded: “What we ought to be doing is focusing on the $900 billion that we’ve already approved and that Secretary Mnuchin helped us negotiate.”

“Focusing on this undermines the very positive impact that what we’ve already done is having,” Cornyn said of the checks.

Still, Democrats remain wary that McConnell will try and roll the three disparate topics together, which Sen. Chris Murphy (D-Conn.) said “is an invitation for this entire effort to fall apart.”

Earlier in the day, Senate Democrats rejected McConnell’s plans for a quick vote on the defense bill, insisting he would have to offer a path forward on larger checks in order to secure a quick vote to overturn Trump’s veto.

Still, there’s been some movement toward embracing the larger direct payments among Republicans. Many House Republicans supported a House bill to boost checks on Monday and conservative Sen. Deb Fischer (R-Neb.) told reporters on Tuesday she’s open to the idea.

“People are hurting, and I think we need to get more aid,” she said, while panning the possibility the checks might get rolled together with unrelated bills. “I’m upset it’s not targeted. I’m upset that the process is always throwing in things together, I’m upset we continue to not have bills in time to really study them.”

Sens. Kelly Loeffler (R-Ga.) and David Perdue (R-Ga.) on Tuesday endorsed $2,000 checks, joining Sens. Josh Hawley (R-Mo.), Marco Rubio (R-Fla.) and Lindsey Graham (R-S.C.). Loeffler and Perdue are both in run-off races on Jan. 5 that will determine Senate control next year and have been hammered by Democrats who have campaigned on bigger checks.

Collins guessed that maybe the Senate could hold a roll call vote later this week on the stimulus checks and said $2,000 would be “very helpful” to working families. But she also said she has issues with the way the bill is written.

“I am concerned that the way it is structured it would also benefit upper income individuals because it does not phase out as quickly as the $600 check,” she said. “A family of four, the income level at which you would get nothing is more than $300,000. And, in a state like mine that’s high income.”

Getting anything to the floor beyond the defense bill looks like a steep task after Tuesday’s brouhaha. First, Schumer tried to pass the House-approved bill increasing the checks from $600 to $2,000, which McConnell rejected. Passing such a bill unanimously was always unlikely, given resistance among Republicans about spending hundreds of billions more on checks.

Then Sanders asked McConnell to at least set up a roll call vote to follow the veto override.

“The leaders of our country, President Trump, President-elect Biden, Minority Leader Chuck Schumer, the speaker of the House Nancy Pelosi are all in agreement,” Sanders said. “Do we turn our backs on struggling working families or do we respond to their pain?”

McConnell spurned that request too. Sanders responded by blocking quick passage of the veto override, leaving the possibility of keeping the Senate in session into New Year’s Day to finish consideration of the defense bill.

McConnell made clear the Senate will complete that task.

“Failure is not an option,” he said. “I urge my colleagues to support this legislation one more time when we vote.”