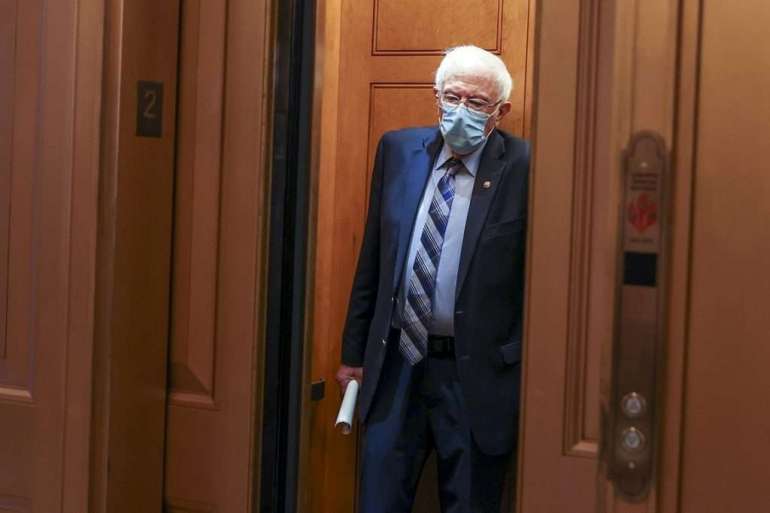 McConnell in particular slammed progressive Sen. Bernie Sanders (I-Vt.) for making the defense bill collateral damage in the stimulus fight. Sanders is leading the charge with conservative Sen. Josh Hawley (R-Mo.) for $2,000 stimulus checks, which were approved overwhelmingly in the House earlier this week at Trump’s urging. Trump has derided the stimulus legislation, which he ultimately signed Sunday, that would only grant $600 stimulus checks to Americans.

“The Senate will not let our national security be shoved off course, certainly not be senators who have spent years, literally years, trying to gut America’s capabilities while our adversaries continue ramping up,” McConnell said of Sanders.

The majority leader, who effectively ruled out consideration of the House version stimulus check bill, has sought to couple the stimulus boost with unrelated provisions aimed at placating Trump’s demands to address legal protections for tech companies and his unsubstantiated claims of voter fraud in the 2020 election.

“The ball is in McConnell’s court. All that he has to do is give us an up-or-down vote,” said Sanders, who is joined by Hawley in the bipartisan push.

McConnell said the House bill on the stimulus checks “has no realistic path to quickly pass the Senate,” even as Trump continues to harangue McConnell and GOP leaders over their refusal to go along with his demands.

While delaying a final vote, top Democrats underscored their support for the defense bill on the Senate floor this week. But they added that the chamber should also address the issue of increasing stimulus checks — and indicated they will still try to push through the version the House passed this week on the stimulus checks.

“There is a very simple solution to this dilemma: Leader McConnell should bring both measures up for a vote and let the chips fall where they may,” Minority Leader Chuck Schumer (D-N.Y.) said. “I believe both measures — the defense override and the $2,000 checks to American families — will both pass.”

Sen. John Cornyn (R-Texas) predicted the Senate would follow the House and override Trump’s veto of the defense bill, calling it a matter of “how long people want to extend this out.”

“I think we know what the outcome is going to be,” Cornyn told reporters. “As I always say, we can do it the hard way or the easy way and frequently we choose the hard way.”

Trump vetoed the defense bill over his push to repeal those legal shields, even after the legislation cleared both chambers with bipartisan super-majorities earlier this month.

Despite the stimulus impasse, the veto override is still inching forward in the Senate. Senators easily voted 80 to 12 Wednesday evening to begin consideration of the measure.

McConnell then teed up votes on the veto override, with a final vote slipping into the new year and likely to come just hours before the new Congress is sworn in on Sunday. A number of special military pay and benefit measures would also temporarily expire after Dec. 31 if the bill isn’t on the books by then.

Unless senators agree to hold the vote sooner, a procedural vote requiring 60 votes will occur on Friday followed by 30 additional hours of debate, pushing a final veto override vote into Saturday.

The president has also objected to provisions in the NDAA that would force the renaming of bases that honor Confederate leaders and limit his efforts to reduce U.S. troop levels in Afghanistan and Europe.

The House voted to override Trump’s veto in a 322 to 87 blowout on Monday.

The Senate is expected to follow suit. It’s unclear how many Republicans may side with Trump and switch votes on the override, though a hefty number of GOP senators would have to reverse course to kill the bill.

If the Senate can muster a two-thirds majority to override Trump’s veto, Congress will have delivered a rare legislative rebuke to the president — and the first and only veto override of his presidency. Trump has vetoed legislation to halt the use of Pentagon funding to build a border wall and quash expedited arms sales to the Middle East, but lawmakers have never come close to overturning his vetoes.