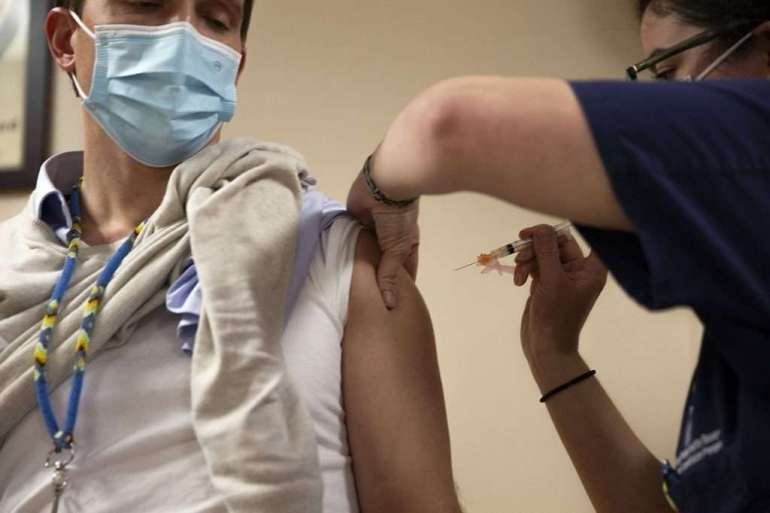 President-elect Joe Biden this week criticized the Trump administration for “falling behind” on efforts to vaccinate Americans against the coronavirus and pledged more federal involvement under his watch. Amid concerns about the pace of the vaccine rollout, President Donald Trump said the onus is on states to administer inoculations faster.

“The Federal Government has distributed the vaccines to the states,” Trump tweeted on Wednesday. “Now it is up to the states to administer.”

Critics say Trump’s team put too much responsibility for vaccinations on resource-strapped state health departments still grappling with the pandemic, while not pressing Congress for aid sooner. Lawmakers eventually approved nearly $9 billion for vaccine distribution in their year-end relief package, but states say it will take weeks to do things like set up mass vaccination sites and launch public education campaigns.

“They should have done that early. And they should have gotten that money out to the states,” said Ashish Jha, the dean of Brown University’s School of Public Health. “And then they should have worked with states to set up all of these places, so that by the time the vaccines arrived, we had all the sites located for where the vaccinations were going to happen.”

The administration made rosy assessments about what’s sure to become the biggest immunization effort in U.S. history, beginning with HHS Secretary Alex Azar’s October assertion that the country by year’s end could have up to 100 million doses, or enough for 50 million people to be vaccinated with a two-shot regimen. That target was gradually scaled back to having 40 million doses, enough for 20 million people to get vaccinated – a benchmark that federal officials repeatedly cited over the last few months.

As for shots administered so far, “we are certainly not at the numbers that we wanted to be at the end of December,” Anthony Fauci, the government’s leading infectious disease expert said on CNN Tuesday. On Wednesday, federal health officials expressed confidence that the pace of vaccinations will pick up as soon as next week.

“We’re launching a vaccine campaign in the midst of a pandemic surge, after a year that’s drained and strained health care providers and public health departments, and we’re launching a vaccine campaign during the winter holidays,” Nancy Messonnier, director of the CDC’s National Center for Immunization and Respiratory Diseases, said on a press call.

Operation Warp Speed, the government’s vaccine accelerator, says it plans to allocate 20 million shots by the end of the year to states, though the last 5 million won’t actually be delivered until the first week in January. The government is holding another 20 million doses in reserve so people can receive their second shots weeks later.

Moncef Slaoui, the head of OWS, has defended the 20 million goal, saying the government has been true to its word.

“The commitment that we can make is to make vaccine doses available … and I think that commitment is met,” Slaoui said last week, adding vaccinations were happening “slower than we thought it would be.”

State officials say it takes time to ramp up any vaccination effort, let alone the enormous Covid undertaking. States and hospitals are hammering out who gets the shots first. The vaccine made by Pfizer must be stored at ultra-cold temperatures. And local officials say they are figuring out how to safely conduct a mass vaccination effort while the virus is still circulating widely.