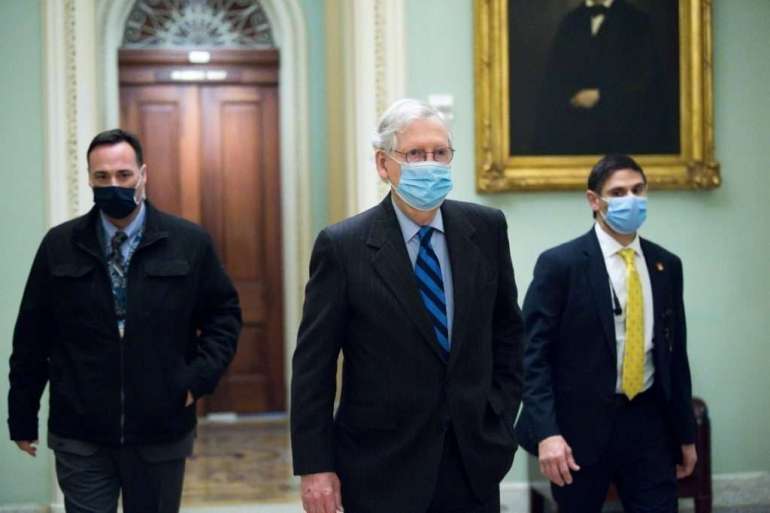 “Today’s vote sent a clear message that Congress will not allow President Trump to stand in the way of that support, and I’m relieved the critical bipartisan priorities we fought for will become law,” Sen. Tim Kaine (D-Va.), said in a statement after the vote.

Republicans could have torpedoed the bill if enough GOP senators had switched their votes to side with Trump. But no one changed their vote from when the bill was originally passed three weeks ago. Seven Republicans, five Democrats and Vermont Independent Bernie Sanders opposed the measure after also voting against it last month.

Trump vetoed the defense measure, H.R. 6395 (116), because it didn’t include his demand to repeal legal protections for social media companies. His 11th hour demand to repeal the liability shield, known as Section 230, was largely sidestepped by lawmakers because it isn’t a national security issue.

Trump also opposes several other major provisions in the bill, including a measure that would force the renaming of military bases that honor former Confederate leaders over a three-year period, authored by progressive Sen. Elizabeth Warren (D-Mass.). The White House also opposed provisions that would limit his push to withdraw thousands of U.S. troops from Afghanistan and Europe.

Trump has also argued the bill is a gift to China, contradicting many Republican lawmakers who contend it is toughest defense legislation Congress has passed regarding Beijing in years. The bill, for instance, sets aside $2.2 billion for a new Pacific Deterrence Initiative to boost the U.S. military presence and deter China in the Indo-Pacific region.

The president slammed Senate Republicans on Twitter following the vote for defying his demands on the defense bill while blocking a bill to increase stimulus checks, a mostly Democratic-led effort that he’s backed.

“Our Republican Senate just missed the opportunity to get rid of Section 230, which gives unlimited power to Big Tech companies. Pathetic!!!” Trump tweeted. “Now they want to give people ravaged by the China Virus $600, rather than the $2000 which they so desperately need. Not fair, or smart!”

The defense bill, which had become law for 59 consecutive years, won wide bipartisan support when Congress passed it last month.

Trump’s veto was just the sixth for a defense bill in roughly four decades — and Friday’s vote is the first time a veto of the legislation has been overridden.

Trump has vetoed several other bills, including measures to curtail arms sales to the Middle East and to block Pentagon funding for a border wall with Mexico. But none of the congressional override votes came close to overturning those.

Leaders of the Senate and House Armed Services Committees warned of dire consequences if the defense bill wasn’t enacted, including military pay and benefit provisions that lapsed on Dec. 31. The committee leaders notably hadn’t staked out a Plan B if the bill failed.

Top lawmakers have highlighted the numerous provisions in the bill aimed at deterring China, as well as a comprehensive cybersecurity overhaul, which comes as the government grapples with a sprawling breach of federal agencies that’s alleged to be Russia’s doing.

“A lot of people contend, as I do, that every year the NDAA’s the most significant vote that we have,” Senate Armed Services Chair Jim Inhofe (R-Okla.) said on the floor ahead of the vote. “This year especially so in light of all of the disruptions and problems that we’ve had.”

“President Trump tried to make this vote a loyalty test and an overwhelming majority of U.S. Senators demonstrated their loyalty to the common defense and to the men and women of the United States Armed Forces who defend our nation,” added Jack Reed of Rhode Island, the top Senate Armed Services Democrat, after the vote. “It was irresponsible for President Trump to veto this measure over issues that weren’t in the bill and had nothing to do with national defense.”

Friday’s vote came a day earlier than expected, as the bill was caught in a logjam over Democratic-led efforts to secure a vote on separate legislation to increase stimulus payments to Americans. Lawmakers were up against a tight deadline to override the veto with a new Congress set to be sworn in at noon on Sunday.

Majority Leader Mitch McConnell sought to quickly finish off the veto override this week, but the measure has dragged out after he blocked a vote on House-passed legislation to increase stimulus checks to $2,000.

Democrats had previously blocked an earlier vote on the veto override in an effort to force McConnell to vote on increased stimulus checks.

The legislation is named in honor of House Armed Services ranking Republican Mac Thornberry, who is retiring from Congress after 13 terms and led the charge among House Republicans to overcome a veto. Following the vote, the Texas Republican expressed hope for continued bipartisanship on national security issues in the new Congress and administration.

“The continuing challenge for members of both parties in the months ahead will be to set aside partisan agendas and put the country first,” Thornberry said in a statement. “Maintaining the broad bipartisan approach to defending the country that has been so successful for us and for the world should be one of the highest priorities.”

The $741 billion bill authorizes $635.5 billion for the Pentagon and $26.6 billion for nuclear weapons programs managed by the Energy Department. Another $69 billion goes toward a separate Pentagon war account.

Aside from a handful of policy disputes, lawmakers came together to boost numerous popular military weapons accounts.

It also greenlights $23.4 billion for the Navy to build nine new warships, $3.5 billion more than the service requested. Lawmakers notably authorized money for a second Virginia-class attack submarine after the Trump administration initially requested funding for just one boat.