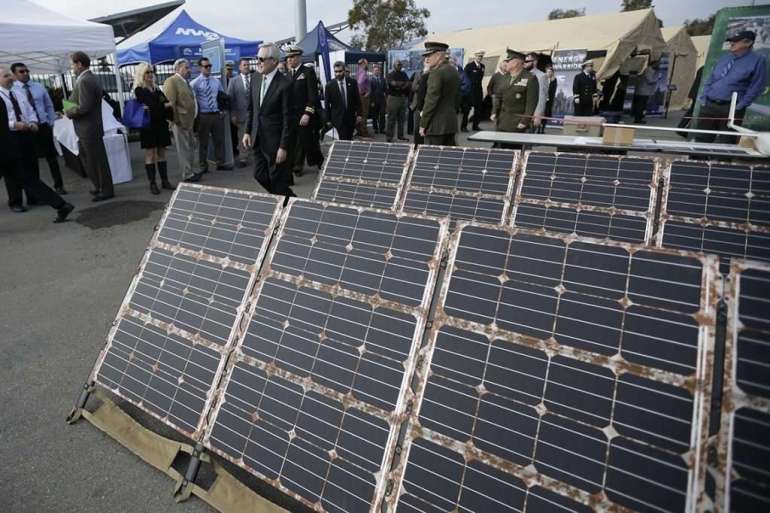 The Pentagon has long been a crucial customer for clean energy technologies, driving the country’s adoption of solar power and the rollout of mobile batteries. Now, its $700 billion budget may offer an opportunity for the Biden administration to help scale-up industries such as those producing electric vehicles and advanced batteries.

“Start with the fact the Department of Defense is the single largest energy user,” said Sherri Goodman, a deputy undersecretary of defense for environmental security under Obama and now a senior fellow at the Wilson Center’s Environmental Change and Security Program, a think tank. “What it does and how it uses its energy, how it reduces its emissions, makes its bases more resilient to climate threats — that helps all America by learn by example.”

The Pentagon helped jump-start the U.S. solar industry back in 2007, when the Air Force contracted to build a 14-megawatt solar farm at Nellis Air Force Base in Nevada, then the largest plant of its kind in the country. Since then, the industry has built solar projects more than 40 times that size, and the military has been one its biggest customers, adding more than 130 megawatts to bases in nearly three dozen states.

Former President Barack Obama also pushed the Pentagon to experiment with biofuels to reduce its ships’ dependence on oil, and though a “Great Green Fleet” powered by biofuels from home-grown crops failed to live up its promise, then-Navy Secretary Ray Mabus found success in even simple solutions: He ordered refitting ships to replace all their bulbs with high efficiency technology, saving power and allowing the ships to stay at sea longer. And the aviation biofuels developed during the period are now being used by airlines to acquire carbon offsets required by European aviation authorities.

U.S. troops also saw other benefits from the Obama years. Batteries carried by soldiers to power radios and other equipment went from 13 pounds to nine pounds, easing their load while they are on maneuvers.

Though Congress often guides the Defense Department on energy conservation projects through the annual National Defense Authorization Act, President Donald Trump reversed many of Obama’s efforts to use the federal government to reduce carbon dioxide emissions to fight climate change, including through a 2018 executive order revoking specific carbon reduction targets for federal agencies. And military leaders who resented being tools of a policy they didn’t feel contributed to the fighting mission were relieved to see an end to that chapter.

Biden is likely to lean on his incoming Defense secretary, former Gen. Lloyd Austin, to ramp up the use of renewable energy sources while hardening the nation’s military bases to the dangers from climate change. Though Austin was tapped over Michele Flournoy, an Obama DoD official with deep experience fighting climate change, experts say he will be keenly aware of the dangers hurricanes and fires pose to bases, and will bring experience dealing with the complexities of fuel logistics.

As commander of U.S. forces in the Middle East, Austin oversaw the first impact of climate change in a theater of operations, in 2015, said Andrew Holland, chief operating officer for the think tank the American Security Project.

“He should know the importance of this, even as he doesn’t have a long record working on this issue,” he said.

Biden’s transition team declined to comment on his plans, and pointed to his posted climate plans.

Biden will likely pick up an Obama-era program in which bases in Nevada and Hawaii built microgrids, enabling them to keep their lights on and continue operations even if the civilian power supply failed. The maturity of solar and wind technology has also driven down prices, and U.S. bases in many places may be able to install their own generation at a lower cost than fossil power.

Biden will also get the advantage of the cultural shift toward efficiency and renewables engendered by Obama and his Defense officials, Goodman said. Veterans have entered the clean energy workforce in higher numbers than other parts of the workforce in states like Ohio, where 11 percent of the clean energy workforce were veterans — double their representation in other industries, according to a report from Clean Energy Trust, a Midwestern clean energy investment fund. And junior officers who were still learning how to implement energy efficiency measures during the Obama years have now advanced to positions of responsibility inside the military.

The threats to its bases from storms packing a stronger punch because of climate change and increased flooding may be the most expensive risks for the Pentagon now. Bases in Florida have suffered billions of dollars in damages in recent years, and the Norfolk Naval Shipyard in Virginia has flooded nearly a dozen times in recent years because of rising seas.

The Iraq War also drove home the need to find more fuel efficient ways of operating, as fuel truckers had among the highest casualty rates in the war. Between 2003 and 2007, nearly 3,000 contractors died or were injured transporting oil to forward operating bases, according to an American Security Project report. Dependence on fuel oil for tanks and Humvees prompted the commander of forces in Iraq — who was later Secretary of Defense — Gen. Jim Mattis to ask military technologists to “unleash us from the tether of fuel.”

That sentiment dovetails with Biden’s plan to rapidly expand the U.S. manufacturing capacity for electric vehicles — an effort where the Pentagon could play a similar role as it did with solar power over a decade ago.

“We’re going to buy electric vehicles,” Holland said. “There will be an increased push to make that a part of energy resilience as well.”

But if Biden wishes to wield the military’s energy budget to push climate goals, he will likely have to find a way to exercise greater control over the purchasing decisions.

Ben Steinberg, now a consultant with Venn Strategies, was the key Energy Department liaison with the Defense Department during part of the Obama administration, and he helped link up DOE energy efficiency and technology programs to the appropriate offices in the Pentagon. He warns that while DoD has a lot of money to invest in research and in scaling up solar, spending decisions are made by thousands of different people across bases, ships and other installations.

“DoD is not a monolithic entity,” he said. “It’s hard to consolidate all of that and have the buying power all working together. My advice is to drive it at the highest level possible and have the [White House Office of Management and Budget] extremely involved in purchasing things and have the OMB drive it with tools. That’s with things like electric vehicles, clustering how you purchase renewable energy so multiple bases can go into a deal together and costs can come down.”

Biden may also be able to duck some of the resistance Obama faced from conservatives. Sen. Jim Inhofe, now chair of the Armed Services Committee, previously lambasted Obama for putting policy objectives ahead of military ones. But solar and wind power in conjunction with batteries have fallen so much in cost that fighting climate change and advancing the Pentagon’s fighting mission are no longer in conflict.

“So long as the military spending is mission and capabilities driven first, if that spending has broader economic and climate benefits, that’s great,” said Nick Loris, a fellow in Energy and Environmental Policy at the conservative Heritage Foundation. “We shouldn’t mandate pricier electricity or fuels on the military unless DOD determines the national security benefits justify the higher costs, which hasn’t always been the case. That diverts resources away from more productive use. However, if the green technologies are cheaper and enhance mission capabilities, all the better.”