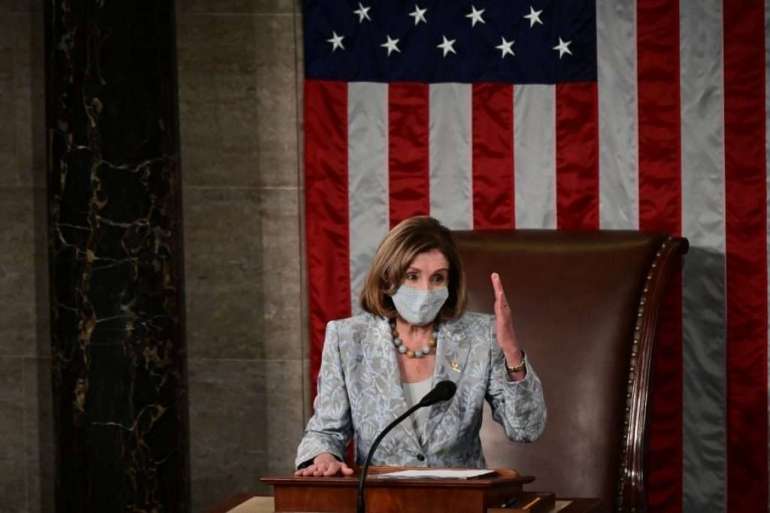 “It’s her job, frankly, to help us with that transition, to help us create a succession plan. I don’t want it to be the kind of thing where people are afraid to voice it, because, ‘The speaker’s still in power, and I don’t want to intrude on her,’” said Rep. Susan Wild (D-Pa.), who has backed Pelosi and says she wants a caucus-wide discussion about her successor.

Pelosi, for her part, has said publicly and privately it’s up to the caucus to choose its leaders and she has no plan to pick a successor.

“I don’t think anybody should be considered the heir apparent to that seat,” added Wild, who is starting her second term.

More than a hundred Republican members of the House and at least a dozen Senators plan to challenge Biden’s presidential win tomorrow — bucking the will of voters and the wishes of prominent GOP leaders.

Publicly, most Democrats insist they are focused on President-elect Joe Biden’s inauguration and looking to Pelosi’s leadership to muscle his agenda — particularly more Covid relief — through a narrowly divided House. But privately, Democratic lawmakers and aides acknowledge they’re already bracing for the inevitable tension that could arise between the most powerful speaker in a lifetime and the Democrats auditioning to replace her and her longtime deputies.

None has publicly confirmed any potential ambitions — to do so would be considered taboo within the caucus. But all have advantages that could help them advance if there’s a leadership vacuum at the top.

Jeffries (D-N.Y.) and Clark (D-Mass.) both have prominent leadership posts, giving them experience, fundraising prowess, and a built-in base of support; Schiff (D-Calif.) is a powerhouse fundraiser and close Pelosi ally; Bass (D-Calif.) has proven experience as speaker in the California State Assembly and former head of the influential Congressional Black Caucus.

Aguilar is in leadership and a well-liked member of the Congressional Hispanic Caucus; and Jayapal recently successfully moved to consolidate progressive power behind her as head of the CPC although some question her base of support beyond liberals.

Asked about the caucus’s attention already beginning to drift toward the next leadership contest, Rep. Ruben Gallego (D-Ariz.) quipped: “Of course, we’re politicians, this is all we do.”

Many Democrats say they’re not sure whether Pelosi will relinquish the gavel in 2022, though the California Democrat publicly committed to just two more terms in 2018 as part of a deal to secure the votes she needed to reclaim the speaker’s gavel.

Several Democrats said they could see a scenario where the current top three House leaders — Pelosi, House Majority Leader Steny Hoyer (D-Md.) and House Majority Whip Jim Clyburn (D-S.C.) — try to stay if their party controls the House, Senate and White House. Others predicted if Democrats lose the House in 2022, it would trigger an automatic power turnover.

Hoyer, who has not been shy about his desire to one day be speaker and like Clyburn bristles at term limits, has been mentioned as a potential “bridge” to a new generation of leadership if Pelosi leaves. But others say the most likely scenario is the three top leaders, all in their 80s, vacate at the same time.

In private meetings, lawmakers and aides say Pelosi has given no indication of her timeline or thinking behind her departure, though she has hinted publicly at leaving after this term. And several Democrats predicted when Pelosi does choose to leave, she will do it on her terms and it will be a surprise to most.

“I know there’s lots of talk of this being Madam Speaker’s last term but I don’t know that to be fact. Frankly until I hear that, my vote is with her,” said Bass, who some Democrats have mentioned as a possible speaker after she was publicly considered as a Cabinet leader and vice presidential pick for Biden.

Rep. Ro Khanna (D-Calif.), another Pelosi ally, said he has interpreted her comments to mean that she will leave in two years, and expects candidates to soon begin positioning themselves for top posts.

“I think people know there’s going to be new leadership in two years, and understand that. She’s been pretty open about that,” Khanna said. “I think it’ll be a wide open field.”

But some Democrats say they’re hoping to avoid the kind of all-consuming public jockeying that could be a distraction to their caucus, particularly with their majority on the line in the next cycle.

“She still has to govern, we need her to be strong. I would suggest to those who might want to succeed her or move up in leadership, do it quietly, do it behind the scenes,” said Rep. Anthony Brown (D-Md.), adding: “Elections around here start early.”

All of this will play out as Democrats defend a daunting electoral map and work through long simmering ideological grievances that were mostly suppressed during President Donald Trump’s presidency — a unifying foe and a distracting political force.

Over the next two years, Pelosi will be required to mollify her caucus’s two competing factions: progressives who are more emboldened after high-profile victories in November, and moderates who have grown only more skittish as their ranks were depleted.

So far, Pelosi has kept both placated, with every progressive and all but five moderates supporting her for speaker Sunday. That included Rep. Alexandria Ocasio-Cortez (D-N.Y.), who has publicly called for a changing of the guard in leadership but praised Pelosi’s ability to maneuver her big tent party.

“In the House, she is pretty universally respected just as a tactician and her ability to consolidate a caucus that is very difficult to bring together,” Ocasio-Cortez said in an interview, declining to talk about the future race for speaker this early in the new Congress.

Those intraparty clashes are already playing out in the opening week of the new Congress, with moderates and progressives sparring over leadership’s plans to tee up a package of electoral reforms as one of the first votes under Biden. Moderates have balked at the idea — since the bill includes a measure they dislike on public financing of campaigns — while progressives insist the bill must be the bedrock of the Democratic agenda.

“I think you’re seeing Speaker Pelosi recognize the growing influence of progressives in the Democratic caucus,” Rep. Mondaire Jones (D-N.Y.), one of several freshman lawmakers pressing for liberal legislation like Medicare for All and the Green New Deal.

Asked about what he’ll look for in the next crop of leaders, Jones said the next speaker can’t “have an antagonistic relationship with progressives,” while adding that he is “open minded” about the potential candidates.

That balancing act between the many factions of the Democratic caucus will be something that the next generation of leadership will, too, inherit.

“That is certainly a responsibility I couldn’t even imagine having to wrangle,” Ocasio-Cortez added.