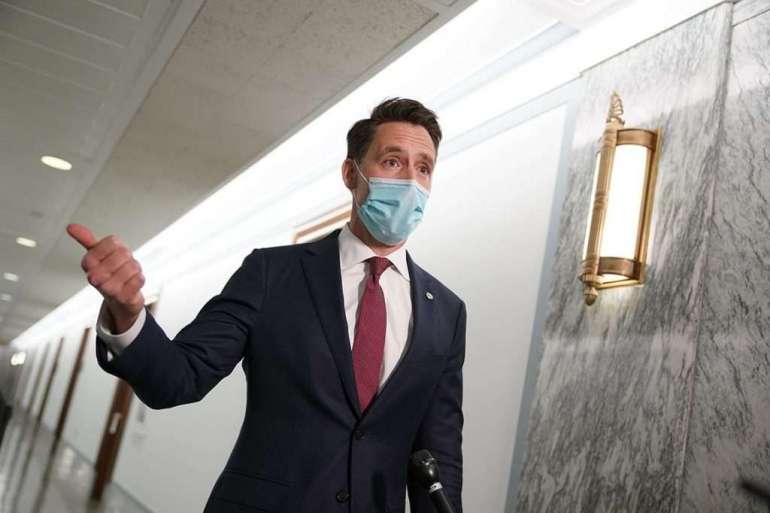 And on Wednesday the debate will come to the Senate floor. Senate Majority Leader Mitch McConnell (R-Ky.) will be the first senator to speak after the first objection to Biden’s win is lodged, according to a source familiar with his plans.

Sens. Tim Scott (R-S.C.), John Boozman (R-Ark.) and Jerry Moran (R-Kan.) also said Tuesday that they would not object to the election results. In a statement, Moran said that doing so “would risk undermining our democracy — which is built upon the rule of law and separation of powers” and that “no victory for one’s cause today can be worth what we would lose tomorrow.” Moran is up for reelection in 2022.

Raphael Warnock clinches a historic win in Georgia’s runoff elections, but the Perdue-Ossoff race is still too close to call — though many are projecting it for Democrat Jon Ossoff.

At least 24 GOP senators will vote to certify Biden’s election win, according to a series of interviews and statements. As of Tuesday afternoon, 14 Republican senators had not said what they would do publicly. With every Senate Democrat also sure to reject the challenge to Biden’s victory, President Donald Trump’s pressure campaign will easily fail, even as it succeeds in splitting the GOP.

Sen. Kevin Cramer (R-N.D.) said Tuesday on MSNBC that reaching his conclusion to endorse Biden’s win in key swing states was a “brutal” episode because a majority of his constituents were urging him to oppose the certification.

“It wasn’t an easy emotional decision,” Cramer said, arguing he would never want to see a situation where senators from other states were trying to disenfranchise North Dakotans. That in mind, he added: “I’m quite comfortable with it.”

Still, not everyone is showing their cards. A number of senior Republican senators, from Chuck Grassley of Iowa to Marco Rubio of Florida to Todd Young of Indiana, are declining to make any comment about their intentions before Wednesday. That day is likely to be filled with intra-GOP clashes, as the objectors fight on the floor with members of their own party who refuse to stymie Biden’s formal path to the presidency.

Hawley has said he plans to challenge Pennsylvania’s electoral votes, while the group of senators led by Cruz is still undecided on how many states to challenge and how many votes to force their colleagues into. Cruz will at least challenge Arizona with the goal of creating a commission to complete a 10-day review of the election, according to a source familiar with the matter. But the odds of establishing such a commission are exceedingly unlikely.

Sen. Kelly Loeffler (R-Ga.) is likely to challenge Georgia. And Sen. Roger Marshall (R-Kan.) will object to all three states, according to a source familiar with his thinking.

Every state that receives an objection from one House member and one senator requires a two-hour floor debate followed by a vote on the challenge. That means at least three lengthy debates — and votes — will occur in the Senate and House.

Trump praised the group of objectors on Tuesday and later tweeted that he hoped “the weak and ineffective RINO section of the Republican Party, are looking at the thousands of people pouring into D.C,” mentioning McConnell, Senate Majority Whip John Thune (R-S.D.) and Sen. John Cornyn (R-Texas).

Hawley again denied he was trying to overturn the election on Monday night, telling Fox News he is merely exercising his rights to force a debate.

“Congress is directed under the 12th Amendment to count the electoral votes,” Hawley said. “There is a right to object, there’s a right to be heard.”

But the challenge is bitterly dividing the caucus. Some Senate Republicans who could eventually seek the presidency have also condemned the effort to block certification of Biden’s victory.

“Congress would take away the power to choose the president from the people and place it in the hands of whichever party controls Congress,” wrote Sen. Tom Cotton (R-Ark.) in an op-ed posted Tuesday. “This action essentially would end our tradition of democratic presidential elections, empowering politicians and party bosses in Washington.”

The split in the party is not falling along clear fault lines. Both establishment-aligned Republicans such as Mitt Romney and Susan Collins and pro-Trump conservatives such as Cotton and Mike Lee have resisted Trump’s push.

While McConnell has warned his conference that Wednesday’s maneuver would be a “terrible” vote, he is not actively whipping against it. He’s going to come down against the effort personally but is encouraging members to follow their conscience.

Wednesday’s vote will amount to Senate Republicans’ most significant rejection of Trump, who continues to make false claims about widespread voter fraud in the election he lost. While the president this week attacked Republicans who rejected his efforts, some of his strongest supporters argue that breaking with the president this time should not erase their ardent support over the past four years.

“I support President Trump and have worked with the president to advance policies important for North Dakota and our nation,” Sen. John Hoeven (R-N.D.) said. But “the people of North Dakota do not want Congress to determine their vote, and we should not set the precedent by doing it for other states.”