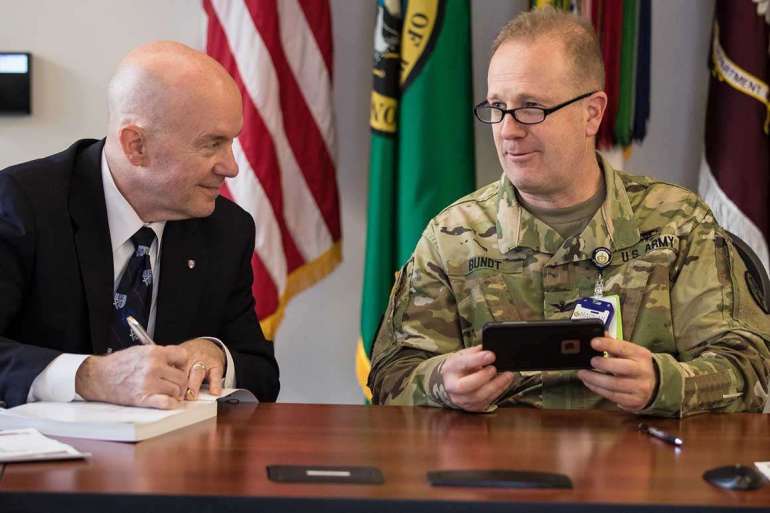 Officials are meeting on Monday to review the case and decide Thomas’ fate.

Thomas McCaffery, the assistant secretary for health affairs, signed a notice of proposed removal dated Dec. 17, laying out the case for removing Thomas from his post.

The Pentagon says the proposed firing is due to Thomas’ poor management of a subordinate. But supporters who have launched a campaign to save Thomas’ job say defense officials are attempting to punish Thomas for fighting efforts to cut the university’s budget or close it outright.

Thomas did not respond to a request for comment. The Pentagon said it does not comment on personnel matters.

Context: In August, POLITICO reported that Pentagon officials had proposed slashing the military health care budget by $2.2 billion to meet cost-cutting goals set by then-Defense Secretary Mark Esper. Those cuts would have made major reductions to the university’s budget, including getting rid of funding for combat casualty care and infectious disease research.

The university, which shares a campus with Walter Reed National Military Medical Center in Bethesda, Md., trains doctors and nurses to care for the military. Students do not pay tuition and instead pay for their education through a commitment to work for the government after graduation, similar to the model used by military service academies.

After POLITICO published its story about the proposed cuts, President Donald Trump tweeted that the proposal “has been firmly and totally rejected by me.”

Still, the effort to cut funding for the university raised questions on Capitol Hill during the nomination process for John Whitley, who had been tapped to lead the Defense Department’s Cost Assessment and Program Evaluation office, which had previously tried to shut down the university.

“I’m deeply concerned with the cuts that have been proposed to USU — especially as we need medical professionals now more than ever,” Sen. Chris Van Hollen (D-Md.) said in August. “These cuts were proposed under John Whitley’s acting leadership at DoD and are a serious red flag.”

Whitley’s nomination was never approved by the full Senate.

The Pentagon’s side: DoD claims it is considering firing Thomas because one of his employees, Arthur Kellermann, who was the dean of the F. Edward Hebert School of Medicine from 2013 to 2020, released personal information about Eric Noji, a volunteer adjunct faculty member at the university who was accused of plagiarism. Noji was fired from his university job in May 2016, but Kellermann allegedly sent Noji’s personal information to other medical organizations where he was a member to try to get him expelled because of his plagiarism after he left the university. The New York Times covered Noji’s plagiarism case in April 2018.

McCaffery, in the notice of proposed removal obtained by POLITICO, said Thomas failed to follow procedures and properly supervise Kellermann. Thomas, who served as an Army officer, including assignments as chief medical officer and director of the Defense Health Agency’s health care operations directorate before leading the university, also lacked candor for allegedly lying to inspector general investigators looking into the incident, showed poor judgment and acted in a way unbecoming to a federal employee, the memo said.

Advocates’ argument: But Thomas’ supporters say Noji was dismissed before Thomas was appointed as president of the university, and that the effort to fire him is retribution for fighting against the proposed budget cuts. POLITICO obtained four letters written by current and former university officials asking both Matthew Donovan, the undersecretary for personnel and readiness, and acting Defense Secretary Chris Miller to let Thomas keep his job.

“The relationship between Mr. McCaffery and Dr. Thomas has often been one of professional tension as a result of Dr. Thomas’ dedication to mission and firm yet always ethical and enlightened defense of the University from those in the budget community who sought its closure,” Jonathan Woodson, the president of the university’s board of regents and a former assistant secretary of Defense for health affairs, wrote in a Dec. 31 letter to Miller. “The timing of the proposed actions, the significant inconsistencies in the letter and the draconian punishment proposed make me suspect other personal issues are involved,” he continued.

McCaffery “just wants to break the china on his way out the door,” according to a defense official, who spoke on background to discuss the case.

What’s next: Donovan will make the final decision whether to fire Thomas on Monday, according to a Jan. 3 letter from lawyers at Greenberg Traurig law firm who are representing Thomas.

Thomas’ lawyers have asked for more time to respond to the notice of proposed removal. The law firm, which declined to comment when reached by POLITICO, asked for at least 45 days to review the case and craft a response, which would push the issue into the next administration.