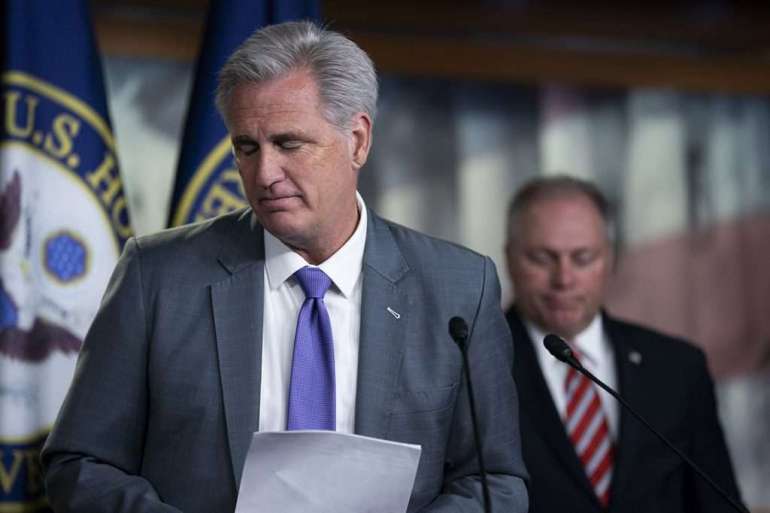 While no one is calling on McCarthy or Scalise to step aside from their posts — they were, afterall, just unanimously elected to serve another term in leadership — tensions are undoubtedly running high inside the conference.

“There’s a little bit of anger, but a lot of disappointment,” one GOP member said in an interview. “And what you saw on display with Steve and Kevin was, eh, we’re just gonna continue on with the narrative of the right and they did not catch the moment. That’s troublesome.”

“When you’re a leader, you have to look around the corner,” the lawmaker added.

The scrutiny, anonymous for now, offers a preview of the reckoning to come in the Republican Party, which had been unified and energized in the aftermath of winning back a net of 10 House seats in November. But since then, Trump’s brazen efforts to subvert the election have fiercely divided the GOP, which could put their efforts to win back the majority — and McCarthy’s dream of claiming the speaker’s gavel — at risk.

“We are on a bad path. Every member of Congress must understand what we say matters — what we say and how we say it matters,” Rep. Gary Palmer (R-Ala.), chairman of the Republican Policy Committee, said in an interview Friday.

Some lawmakers are even questioning whether this could hurt McCarthy’s long-term standing in the party. The California Republican has built his political brand around his close ties to Trump over the past four years — a political calculation that has put him in lockstep with the House GOP, which remains mostly pro-Trump.

Still, McCarthy appeared to do some damage control on Friday, putting out a statement acknowledging Joe Biden as the president-elect for the first time and saying he had reached out to Biden in the hopes of de-escalating the fiery rhetoric and working toward uniting the country.

The remarks represent the first outward sign of McCarthy offering Biden an olive branch — and turning the page on Trump.

“Our country is not just divided. We are deeply hurt,” McCarthy said in his statement. “The task ahead for the next Congress and incoming Biden Administration couldn’t be more momentous. But to deliver a better America for all, partisans of all stripes first must unite as Americans and show our country that a peaceful transition of power has occurred.”

Some rank-and-file members are also lashing out at one another. Rep. Adam Kinzinger (R-Ill.) said he was “embarrassed” by some of his colleagues.

And Rep. Dan Crenshaw (R-Texas), a Navy SEAL who was wounded in Afghanistan, told the Houston Chronicle: “All of the members who called for everyone to come and fight and make their last stand, all of those members were scattered like cowards while the Capitol Police had to do the fighting.”

McCarthy and Scalise — who survived an assassination attempt at a GOP baseball practice in 2017 — were quick to strongly condemn the outbursts of violence on Wednesday, though they steered clear of criticizing Trump. And as the rioters were breaching the Capitol, McCarthy said on ABC News that he had “begged” Trump to address the nation instead of just simply putting out a tweet.

But some GOP members wanted their top leaders to go further in distancing the party from Trump, whom Republicans from across the spectrum feel was responsible for sending protesters to the Capitol armed with anger and misunderstandings about Congress’s election certification process. Even some members of the hard-line Freedom Caucus said Trump was to blame for the mob attack.

“Fundamentally, where I disagreed with the White House and with most of my Republican colleagues… is that the Constitution is clear we count the electors and we should say so,” said Rep. Chip Roy (R-Texas), a member of the House Freedom Caucus, who opposed the objecting to the election results in Congress.

“I think Republicans needed to be more responsible about explaining that reality, rather than putting forward a reality that was just not true.”

Some lawmakers were also upset that McCarthy and Scalise — along with over 120 House Republicans, easily a majority of the conference — still supported objecting to the electors from several states after the riots ensued.

“I disagreed with going forward and objecting to a second state,” said freshman Rep. Nancy Mace (R-S.C.), who has been physically threatened since she came out against challenging the election results. “I just wish we had taken a moment and said this is not the time or place.”

Even before the outbreak of violence, one Republican lawmaker said they were “disgusted” with how McCarthy has handled Trump’s false claims of voter fraud, including counseling some of the freshmen members about which states had the strongest cases for objections.

Kinzinger, a vocal Trump critic who has called for Trump to be immediately removed from office, has not criticized any House GOP leaders by name. But he did say in one tweet: “Leaders that led this should all resign so the adults and truth-tellers can #RestoreOurGOP.”

Other Republicans, however, put the blame squarely on Trump. And some GOP members came to McCarthy’s defense, arguing that behind the scenes, he has actually helped rein in some of Trump’s worst impulses over the years.

“I think McCarthy has been the single most moderating factor of Trump throughout his whole term,” one Republican member said. “I think it’s underappreciated how much sense Kevin talks into Trump, and I think Trump has listened to Kevin more or as much as anyone else.”

The approach from McCarthy and Scalise has put them directly at odds with Cheney, the No. 3 House Republican, who has been viewed as someone who may try to climb the leadership ranks one day.

She has repeatedly positioned herself against controversial Trump decisions, to the outrage of Trump loyalists. Some of them had even discussed recruiting someone to challenge her for conference chair.

But now she appears not only to be mostly forgiven by some of her critics for becoming a foil to Trump, but she is also seeing her standing rise as Freedom Caucus members split with Trump — and even one another. One Freedom Caucus member even chased Cheney down on Wednesday to thank her, said one GOP source.

“People are going to be looking at this moment when they look at who is going to lead the party,” said one GOP lawmaker. “[Cheney’s] political capital has risen significantly. She had the courage of her convictions.”

McCarthy has also taken a far different path than Senate Majority Leader Mitch McConnell (R-Ky.), who actively discouraged Republican senators from joining the anti-certification effort, describing his vote to rubber-stamp Biden’s victory as “the most important vote I’ve ever cast.”

McCarthy’s allies, however, said he was trying to stay publicly neutral in order to maintain conference unity. He didn’t announce his position ahead of the certification vote, encouraged members not to attack each other over their positions, allowed members to debate the issue during a two-hour long conference meeting, and worked to make sure Republicans on both sides of the debate would have speaking time on the floor.

But any goodwill McCarthy created among the GOP lawmakers opposing the objection effort seems to have dissipated after pro-Trump rioters ransacked the Capitol.

“McCarthy hurt his brand,” another GOP member remarked, adding: “Scalise was to be expected.”