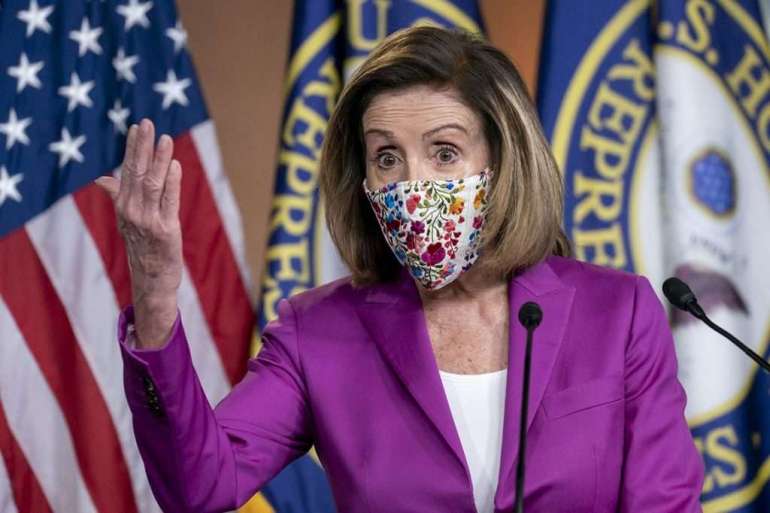 “In protecting our Constitution and our Democracy, we will act with urgency, because this President represents an imminent threat to both,” Pelosi said in the letter to Democrats on Sunday night laying out next steps.

The House will try to pass a measure on Monday imploring Pence to invoke the 25th Amendment, through which he and the Cabinet declare Trump “incapable of executing the duties of his office, after which the Vice President would immediately exercise powers as acting president.” If Republicans object, as is virtually certain, Democrats will pass the bill via a roll call vote on Tuesday.

“We are calling on the Vice President to respond within 24 hours,” Pelosi wrote. “Next, we will proceed with bringing impeachment legislation to the Floor.”

But it’s not clear when exactly the Senate will take up the House’s measure. The Senate isn’t scheduled to return until Jan. 19, but will hold pro forma sessions on Tuesday and Friday. In theory, a senator could try to pass the House resolution by unanimous consent, but as of now it appears unlikely that it would pass.

On Monday, multiple House Democrats plan to introduce impeachment resolutions that would become the basis of any impeachment article considered by the House later this week.

Rep. David Cicilline (D-R.I.), who will introduce an article of impeachment against Trump on Monday, said on Sunday that roughly 200 Democrats have co-sponsored the measure.

Currently, 211 voting members (plus three nonvoting members) support Cicilline’s legislation, and they are hoping to reach 217 voting members by Monday morning, enough for the House to impeach Trump, one Democratic source familiar with the matter told POLITICO.

A small number of Democrats have opted not to co-sign the bill, but privately say they will vote to support the resolution on the floor, the source added.

House Speaker Nancy Pelosi has announced that Democrats are moving forward with trying to remove President Donald Trump from office.

The impeachment effort in the House is likely to be bipartisan, with Democrats expecting at least one GOP lawmaker — Rep. Adam Kinzinger of Illinois — to sign on. A handful of other House Republicans are seriously weighing it, according to several sources, though those lawmakers are waiting to see how Democrats proceed, and some are concerned about dividing the country even further.

Among the GOP members whom Democrats are keeping an eye on are Reps. John Katko of New York, Brian Fitzpatrick of Pennsylvania, Fred Upton of Michigan, Liz Cheney of Wyoming and Jaime Herrera Beutler of Washington.

Across the Capitol, at least two Republicans — Sens. Pat Toomey of Pennsylvania and Lisa Murkowski of Alaska — have called on Trump to resign. On Saturday, Toomey told Fox News, “I do think the president committed impeachable offenses,” but told CNN the next day that he does not believe there is enough time to impeach.

Sen. Ben Sasse (R-Neb.) has also said he would consider articles of impeachment.

Another option has emerged among some Republican and moderate Democratic circles — censuring Trump — though it remains highly unlikely to advance.

A censure resolution would gain far more support in the GOP than impeachment. Some Republicans have privately been pushing for that route and are trying to get Biden on board, according to GOP sources. That group of Republicans is also warning that impeachment could destroy Biden’s reputation with Republicans.

But censure is considered a nonstarter in an incensed House Democratic Caucus, where members see it as a slap on the wrist that gives Republicans an easy out.

The Democrats’ enormous step toward impeachment on Sunday comes after Pelosi and other top Democrats held a private call on Saturday night in which they discussed the potential ramifications that a lengthy impeachment trial could have on Biden’s presidency.

Democratic leaders discussed several options to limit the political effects on Biden’s first 100 days, with one option — floated by House Majority Whip Jim Clyburn (D-S.C.) — for the House to delay the start of an impeachment trial in the Senate by holding on to the article of impeachment.

Senate Majority Leader Mitch McConnell (R-Ky.) has sent out a memo to senators explaining that the Senate could not take up impeachment until Jan. 19 at the earliest, absent unanimous consent.

A final decision has not been made, and House Democrats will discuss the matter on a 2 p.m. caucus call on Monday.

Lawmakers are already privately expressing concerns about returning to the Capitol for multiple days this week, worried about both a potential coronavirus outbreak and whether the building is secure, given how easily an armed pro-Trump mob invaded on Wednesday.

The Capitol physician urged House lawmakers and staff to get tested in a memo Sunday, saying they might have been exposed to someone who had the virus while huddling for safety in a large committee room for hours on Wednesday. During the hourslong lockdown, several Republican members refused to wear masks despite being offered them by Democrats worried about the spread of the deadly virus.