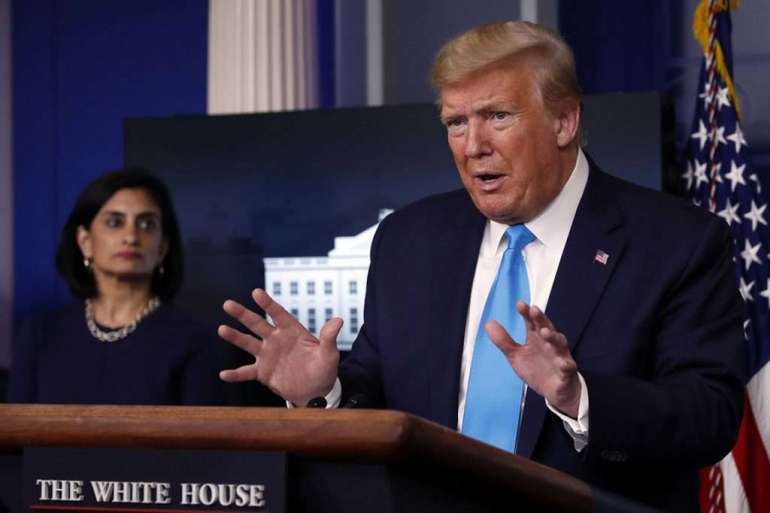 Trump announced on Sept. 24 that Medicare recipients would receive “incredible” $200 cards in the “coming weeks,” blindsiding his own aides and sparking a hasty attempt to rush announcement letters and cards to 39 million Medicare beneficiaries before Election Day. The president latched onto the plan to lower Medicare beneficiaries’ drug costs even as his support plunged among older Americans, with polls showing that challenger Joe Biden had opened a double-digit lead among Americans ages 65 and older.

But the taxpayer-funded $7.9 billion plan, obtained by POLITICO, quickly ran into legal and logistical hurdles. The health department’s top lawyer warned in an internal memo that Trump’s plan could violate the law by using taxpayer funds in such a fashion so close to Election Day and recommended that the Justice Department review the proposal. An industry consortium that helps the IRS govern electronic transactions at point-of-sale repeatedly rebuffed the administration’s plan, saying it was inconsistent with how other benefit cards were administered.

Meanwhile, Democrats called the initiative a political stunt to boost Trump’s approval among older Americans, and the Government Accountability Office agreed to review the program’s legality. Drug policy researchers panned the idea, saying it was a poor use of Medicare funds and would do little to reduce Medicare recipients’ medical costs.

Even as the plan stumbled, White House officials repeatedly insisted to reporters that the cards were still forthcoming. Bloomberg reported last month that the White House expected the cards to be mailed by Jan. 1.

But health department officials said that the timeline was never realistic, given the sheer number of unresolved issues.

For instance, the same Treasury Department team working on the drug-discount cards was also tapped to send out the stimulus checks included in Congress’ year-end relief package, delaying their work for days. Meanwhile, MetaBank, which the Trump administration had approached to help disburse the necessary funds, sought to be indemnified for more than $1 billion in case of a lawsuit, said two officials, which sparked a new debate among government lawyers.

MetaBank referred questions to the Treasury Department, which didn’t respond to requests for comment.

Meanwhile, some Trump officials began questioning whether the Trump administration was rushing to lay the groundwork for announcement letters and cards that couldn’t be sent until February or March and would go out bearing Biden’s name instead. That would have conflicted with Trump’s own characterization of the plan.

“I will always take care of our wonderful senior citizens,” Trump said on Sept. 24 when he unveiled his planned cards. “Joe Biden won’t be doing this.”