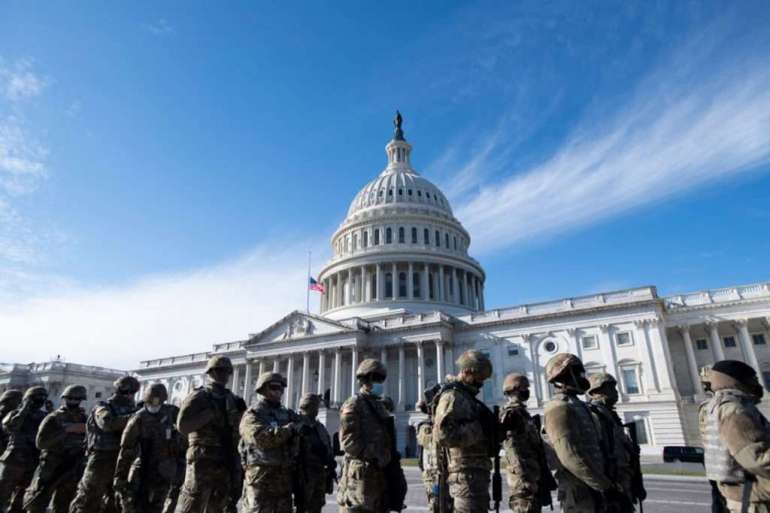 The news comes as authorities are in a heightened state of alert, scrambling on Monday morning to respond to a fire in the general area of the U.S. Capitol. While the Capitol was briefly placed on lockdown, upending a rehearsal for Biden’s inauguration on Wednesday, the source of the fire turned out to be a propane tank that had exploded at a homeless camp nearby.

POLITICO’s Eugene Daniels joins Dispatch to talk about how Kamala Harris will make history when she’s sworn in tomorrow — and what sort of challenges she’ll face as “a first.”

Altogether, the Pentagon has authorized roughly 2,750 active-duty personnel to support the inauguration, but the bulk of those — about 2,000 — are for “ceremonial support,” such as the band, the official said.

National security leaders across the country ordered an unprecedented show of force this week ahead of inauguration. The active-duty teams will join the roughly 21,500 National Guardsmen currently deployed to the National Capital Region helping civilian authorities respond to the threat of potential violence in the days leading up to the inauguration. That number could swell to 25,000 Guardsmen, many of whom are protecting the Capitol, armed with lethal weapons and riot gear.

The FBI said Thursday that it had already made more than 100 arrests in connection to the Jan. 6 assault on the Capitol and that law enforcement was monitoring “an extensive amount of concerning online chatter” ahead of the inauguration.

While the North American Aerospace Defense Command, or NORAD, is responsible for enforcing flight restrictions over the nation’s capital on Inauguration Day, as on any other day, no NORAD forces have been specifically dedicated to support the inauguration, the defense official said.

“Multiple resources, including rotary wing and fighter aircraft, are always poised to intercept any aircraft that may pose a security issue in the area,” the official said.