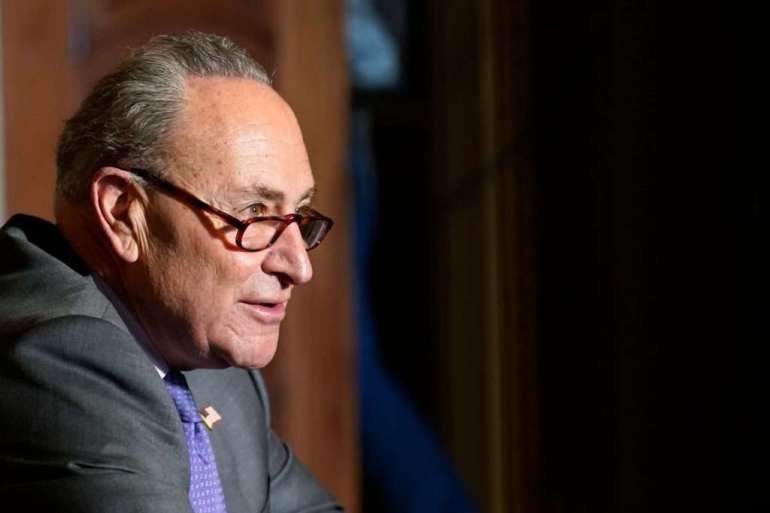 “Chuck Schumer is the majority leader and he should be treated like majority leader. We can get shit done around here and we ought to be focused on getting stuff done,” said Sen. Jon Tester (D-Mont.). “If we don’t, the inmates are going to be running this ship.”

“It would be exactly the wrong way to begin,” said Sen. Richard Blumenthal (D-Conn.). “We need to have the kind of position of strength that will enable us to get stuff done.”

Four years ago, as McConnell himself came under pressure from former President Donald Trump to gut the filibuster, 61 senators signed a letter to Senate leaders emphasizing the importance of protecting the supermajority requirement. And even now Democrats like Sens. Kyrsten Sinema of Arizona and Joe Manchin of West Virginia say they want to keep the filibuster, emphasizing that it drives compromise.

For that reason, the filibuster appears safe for the immediate future regardless of what happens in the coming days. If Democrats were to change it, it would likely be in response to Republicans blocking their bills repeatedly. And there’s plenty of pent-up angst in the Democratic Party, which is now in control of both chambers of Congress and the White House for the first time in more than a decade.

Republicans say that the time to commit to keeping the filibuster is now, not at a moment of political fury over legislation that the minority blocks. Sen. Lindsey Graham (R-S.C.) said the GOP simply wants to hear Schumer say “that we’re not going to change the legislative filibuster.”

“You want to do it before there’s an emotional, difficult, controversial issue. So that it isn’t issue-driven, it’s institution-driven,” said Sen. Susan Collins (R-Maine), who organized the 2017 letter from rank-and-file senators to Schumer and McConnell.

The fight over the filibuster holds major consequences, both immediate and into the future. McConnell and Schumer met on Tuesday for a half-hour about how to organize the Senate but came to no resolution. McConnell brought up the filibuster in that meeting, while Schumer argued the Senate should adopt the same rules from the last 50-50 Senate in 2001, which didn’t touch on the 60-vote threshold.

The longer the standoff over the organizing package persists, the weirder the Senate will become. New senators have not been added to committees and the ratios have not changed, leaving the GOP in the majority on some panels. That’s already complicating the ability of the Senate to confirm some of President Joe Biden’s nominees.

“It’s exactly the opposite of the conversation that we should be having today,” said Sen. Martin Heinrich (D-N.M.). “To sort of jade the day of the inauguration and three new senators being sworn in with sort of political hostage-taking is, I think, an indication of how Machiavellian politics around here have become.”

Democrats could change the Senate rules to a simple majority with the support of all 50 Senate Democrats as well as Vice President Kamala Harris via the “nuclear option,” or a unilateral rules change. The rules have been changed by a majority three times since 2013, once by Democrats and twice by Republicans — first on gutting the filibuster on most nominations, then on Supreme Court picks and finally to shorten the debate time for some nominees. Changing the legislative filibuster would effectively make the Senate much more like the House, a majoritarian institution.

Democrats have not discussed the filibuster impasse with McConnell as a caucus yet, though they are expected to hold a party meeting by phone as soon as Thursday. And several Democrats said they aren’t sure exactly how Schumer will thread the needle with his GOP counterpart. Schumer has repeatedly declined to comment on the talks with McConnell and on the filibuster. Notably, McConnell held firm on keeping the filibuster rule in place even as Trump repeatedly attacked him on Twitter.

But Democrats have strong feelings on the subject that will be hard to reconcile with McConnell’s demand. As Sen. Jeff Merkley (D-Ore.) put it: “I don’t think there is any way that Democrats would find it acceptable to invoke new rules that McConnell certainly never volunteered to abide by himself.”

“It’s generally up to the majority as to whether they want to pursue a conversation about changing the rules. And we should reserve that right,” added Sen. Chris Murphy (D-Conn.). “I’m a supporter of filibuster reform, I obviously want to make my case to the caucus when and if that moment arises.”

Schumer may be able to satisfy McConnell with something less than a written commitment, perhaps a speech on the Senate floor or a verbal acknowledgement that his preference is not to invoke the nuclear option. But even some Republicans are skeptical that Democrats will give up their leverage so easily and simply trust that Republicans will work with them on legislation.

McConnell’s “reasoning is let’s do it now while we’re all in this management mode as opposed to under fire when there’s a burning issue,” said Sen. Kevin Cramer (R-N.D.). “I’m skeptical of the outcome. I think Mitch’s effort is noble but I just don’t think it ends there.”