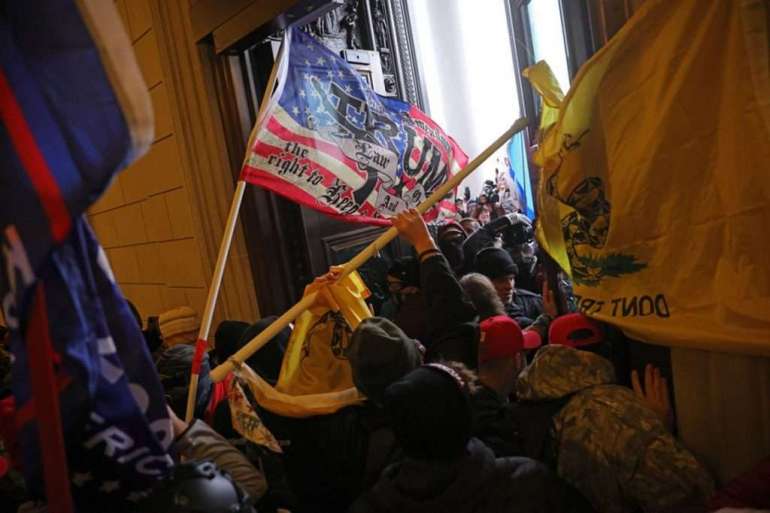 After the chaotic and violent day at the Capitol, Camargo returned to his home in Deerfield Beach, according to an FBI affidavit. When an FBI agent reached out to him by phone, Camargo became uncooperative and questioned the agent’s loyalty to the Constitution, the court filing says.

“He admitted to the officer upon his arrest that when we saw police officers at his residence, who were there to effect a search warrant, he drove in the other direction,” Poulin said. “He drove directly to Washington, D.C. … His response to this information was to go back to the scene of the crime on another politically-charged day where there was increased concern for additional action.”

Magistrate Judge Zia Faruqui said Camargo’s actions created too much risk that he would not appear for trial. “He was, at a minimum, trying to flee from prosecution. At worst, he could’ve been doing something worse than that,” Faruqui said.

Faruqui said the attack on the Capitol came “at the crucial moment of the foundation of our democracy” and he said Camargo’s return to Washington suggested he might feel “obligated” to take further action against federal government activities.

Camargo is charged with violating the federal Anti-Riot Act, unlawful entry into a restricted building and disorderly conduct.

Meanwhile, a bail hearing expected Thursday for a New Mexico county commissioner charged in the Capitol riot was scuttled after he reportedly refused to take a coronavirus test.

Couy Griffin, 47, the leader of Cowboys for Trump, was arrested Sunday in Washington after he returned to the city following the Jan. 6 unrest.

Court proceedings related to his case were delayed Thursday and difficult to follow over a phone line that provides the only public access to the session.

Faruqui and an attorney retained by Griffin’s family indicated that the Otero County commissioner and former cowboy performer at Paris Disneyland had Covid-19 or was suspected of having it. He was asked to take a test and declined, so could not be moved from an isolation unit to the place where jail officials facilitate video calls.

“We have to make sure he’s getting a fair shake here,” Faruqui said. “I’m concerned he’s not getting that because of his unwillingness to speak to the court. … I don’t like the idea of him languishing there while we make a determination.”

Prosecutors have urged that Griffin also be kept in jail pending trial. They cite a series of provocative and inflammatory comments he has made, which include declaring that “the only good Democrat is a dead Democrat.” He later qualified his statement to say he meant only politically and not physically.

During a county commission meeting last week in New Mexico, Griffin said he planned to bring weapons as he returned to Washington for the inauguration.

“I am going to leave either tonight or tomorrow. I’ve got a .357 Henry big boy rifle . . . that I got in the trunk of my car, and I’ve got a .357 single action revolver . . . that I will have underneath the front seat on my right side,” Griffin said. “I will embrace my Second Amendment, I will keep my right to bear arms, my vehicle is an extension of my home in regard to the constitution law, and I have a right to have those firearms in my car.”

It’s unclear whether Griffin actually had weapons with him when he was arrested Sunday.

Separately, another magistrate judge agreed Thursday to the release of an Iowa man who allegedly led a mob chasing U.S. Capitol Police Eugene Goodman up a staircase just outside the Senate chamber during the Jan. 6 riot.

Doug Jensen, 41, of Des Moines, is charged with a felony violation of the Anti-Riot Act, as well as five misdemeanors related to the storming of the Capitol.

Prosecutors asked U.S. Magistrate Judge Celeste Bremer to hold Jensen without bail pending trial, but Bremer declined. Jensen, who’s allegedly a devoted follower of the QAnon conspiracy theory and wore a “Q” sweatshirt during the assault on the Capitol, was trying to become a “poster boy” for the movement, Bremer said.

In an order issued Thursday, the judge — who is also based in Des Moines — said she believed that placing Jensen in home detention with electronic monitoring would be adequate to protect the community and ensure he appears for trial.

However, Bremer said Jensen will remain in a county jail in Iowa until next Wednesday so prosecutors can appeal her ruling.