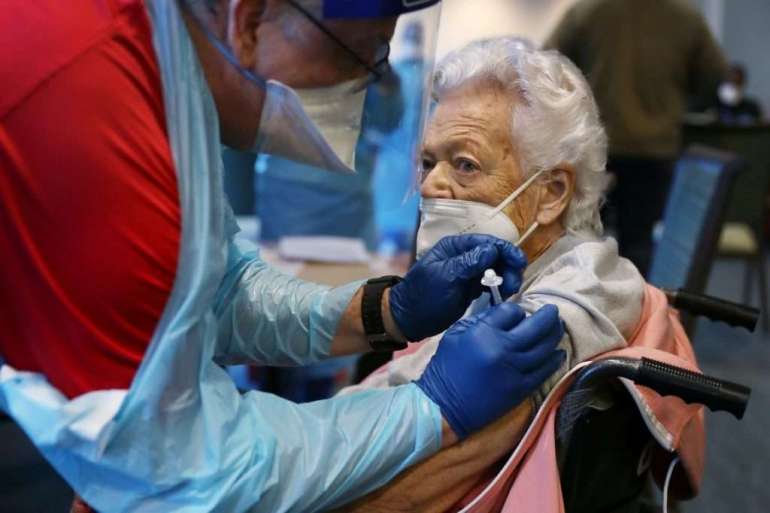 “We are stressing to our districts to get vaccine moved from freezer to Oklahomans, preferably within a seven-day time period,” said Keith Reed, deputy commissioner of Oklahoma’s health department. “And this vaccine is really just sitting right now.”

Every state but West Virginia joined a federal nursing home vaccination program the Trump administration created to ensure protection for a population that’s particularly susceptible to the coronavirus. Some states have complained about the pace of that program, even though the retail pharmacy giants providing the shots — CVS and Walgreens — reported Monday they had met their goal of finishing the first round of vaccinations in nursing homes.

States revising their allocations said they’re correcting for a mismatch in supply, now that many states have cleared vaccinations for people 65 and over, and other high-risk groups. Their new strategy also comes as the Biden administration said it’s working to untangle conflicting information about the nation’s vaccine supply, as states warn they’re running out of doses while data shows many are still sitting on the shelves.

Utah is halting new shipments for long-term care facilities this week and is instead redistributing 8,775 shots to local health departments and other providers, said health department spokesperson Tom Hudachko.

“We’re not looking at this as a result of CVS or Walgreens failing to fulfill their obligation,” Hudachko said. “In fact, just the opposite: They’ve done a fantastic job in Utah of getting through their first clinics. It’s just clear to us that the federal allocation was too high.”

Minnesota is pulling 30,000 doses from the long-term care program that will instead go toward vaccinating teachers and childcare providers who are newly eligible, a state spokesperson said. Maine has transferred about 3,400 doses from CVS and Walgreens to hospitals and independent pharmacies. Michigan is sending 120,000 shots to other providers that were originally intended for long-term care facilities, according to Lynn Sutfin, a health department spokesperson.

States stressed that revising the allocations — which two state officials said must get sign off from the federal government — won’t hinder the pharmacies’ ability to vaccinate nursing homes and assisted living communities. Spokespeople for CVS and Walgreens confirmed that in some cases, the pharmacies received more vaccine than they needed and are working with states to determine how best to reclaim or defer those doses.

The Centers for Disease Control and Prevention is also helping states with reallocation, a spokesperson said.

“Now that pharmacies have made substantial progress in efforts to bring vaccination directly to the more than 70,000 long-term care facilities nationwide — and we have a better grasp of how much supply is needed to finish vaccinating these medically fragile residents and the frontline staff caring for them — we are working with pharmacy and jurisdictional partners to draw down on, or temporarily pause, those allocations where appropriate,” the agency spokesperson said.

LeadingAge, an association of nonprofit aging services providers, hasn’t heard of reallocated doses being diverted from residents or staff already scheduled to receive vaccines. However, spokesperson Lisa Sanders said the group will monitor how states change their plans.

“Our primary concern is that older adults and the people who care for them are prioritized because they haven’t been throughout this whole pandemic,” Sanders said. “If reallocation means they are not going to be prioritized, that would be concerning.”