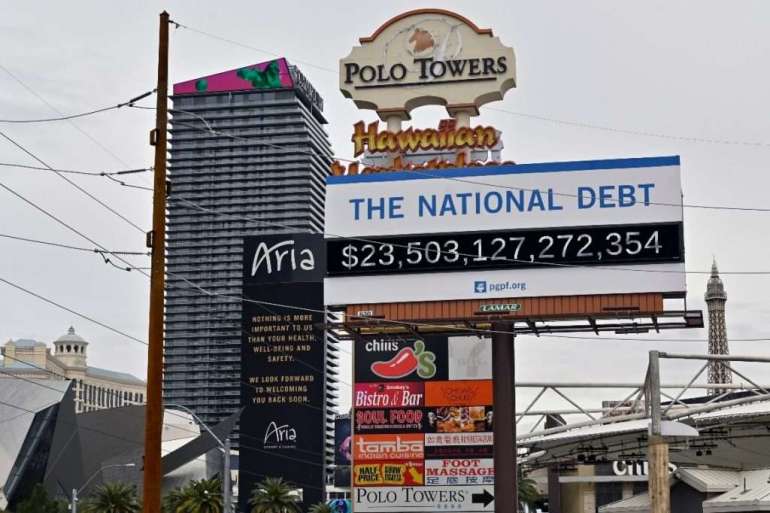 The U.S. government spent its way to a record-busting $3.1 trillion budget deficit in fiscal 2020 — and that was before Congress passed another $900 billion coronavirus relief package in December. But interest rates have barely budged from their rock-bottom levels, signaling that investors — the people who actually finance the debt — aren’t the least bit concerned about all that government borrowing.

More than a decade of historically low rates, coupled with surging demand for safe investments like U.S. Treasury bonds, ensure that Biden can probably spend as much as he wants to revive the pandemic-battered economy and concentrate on the debt later, despite new alarms being raised by Republicans in particular.

Yellen, confirmed on Monday night as Treasury chief, and Federal Reserve Chair Jerome Powell have embraced the idea of using deficit spending to get the economy back on track — and potentially save money in the long run — as millions remain unemployed and small businesses have been forced to close. And it’s a strategy that has found plenty of support on Wall Street.

“Next year there will be a lot of focus on the debt and deficit, but let’s get through this now,” JPMorgan Chase CEO Jamie Dimon told reporters earlier this month. “We’re still in the middle of Covid, which is still killing 4,000 people a day.”

A bipartisan group of lawmakers voiced their concerns with Biden’s proposed relief package to White House officials on Sunday, with some of them pointing to the price tag.

Public opinion has shifted markedly on the national debt; in 2010, 60 percent of respondents to a Pew research survey cited deficit reduction as a top priority, a number that reached as high as 72 percent during Barack Obama’s presidency — leading him to champion spending freezes even as the economic recovery remained shaky. By 2019, that percentage had dropped to 48 percent.

Still, some senior Republicans are starting to bring up the deficit again as they cry foul on Biden’s agenda. They point to the government’s more than $21 trillion debt load, an eye-popping number that is roughly equal to the size of the entire U.S. economy.

“The one thing that concerns me that nobody seems to be talking about anymore is the massive amount of debt that we continue to rack up as a nation,” Sen. John Thune (R-S.D.) told Yellen at her nomination hearing. “When is it too much? When do we hit that point where the thing starts to collapse?”

Increasingly the answer from experts in the market for U.S. government debt is: we’re not close.

“The most likely constraint on stimulus would be fiscal adventurism that results in uncomfortable levels of inflation,” said Guy LeBas, chief fixed income strategist at financial firm Janney Montgomery Scott. “And we’re so far away from that.”

Deficit spending — a key remedy for recessions — has long been considered a drag on the economy over the long term, diverting private investment into government bonds instead of jobs and technology, and swallowing tax dollars into a mounting pile of interest payments. To avoid these effects, government spending is often framed like business spending: Costs should be offset by revenue.

But in reality, the federal government’s finances are nothing like a credit card.

The U.S. borrows money by selling bonds that are traded on the open market, and they can be owned by anyone from regular citizens to foreign governments. The more demand there is for those bonds, the lower the interest rate the government has to pay.

These bonds, known as Treasury securities, are risk-free investments because the U.S. government is theoretically unable to default on its debt; if it needs to, it can just borrow more money to pay off its current obligations. Therefore, confidence in the stability of the federal government keeps demand high.

“They don’t have to ‘pay back the debt,’” said Julia Coronado, a former Fed economist and president of MacroPolicy Perspectives. “That’s just never how it’s worked.”

The government’s finances are also getting a lift by way of the U.S. central bank. The Fed is scooping up billions of dollars in Treasury securities every month as part of its effort to keep interest rates low to stimulate the economy as it weathers the crisis. It has bought more than $2.3 trillion in U.S. debt in the past year.

But the U.S. government’s borrowing power goes even beyond that, thanks to the dollar’s status as the world’s reserve currency. Much of world trade is conducted in dollars, and countries and foreign governments have savings in the U.S. currency, so it is convenient for them to also own U.S. debt. Because demand for the dollar is so strong, the federal government can run higher deficits than any other country.

These factors helped the U.S. run high deficits under President Ronald Reagan, who cut taxes and ramped up defense spending — a fact Democrats point to as a matter of hypocrisy on the part of the GOP. But it offers a practical lesson as well: Interest rates were considerably higher then, when debt was about half the size of the economy.

“If you look at interest paid as a share of GDP, compared to the 1980s, where the 10-year [Treasury security] was at 8 to 9 percent, debt-to-GDP can likely be many times higher now with a 10-year at only 1 percent,” said Seth Carpenter, a former Treasury official and chief U.S. economist at UBS.

So, what’s the downside to running high deficits? The biggest concern is that the government will spend so much money that prices and wages rise unsustainably, leading to unhealthy levels of inflation — hurting people’s ability to buy goods and services. This is a theoretical concern that economists agree is a definite limitation on borrowing.

Still, inflation has remained muted for years. Indeed, U.S. officials and economic observers worry that the economy could experience the same fate as Japan, which has struggled against deflation and sluggish growth for decades.

Debt worriers similarly fear interest rates will rise along with the volume of Treasury securities, under the logic that the more you flood the market, the less investors are interested in buying it.

But Treasury rates are also influenced by factors like how quickly consumers and businesses are spending money, loan demand, where the Fed has set its policy rate, regulations on banks, and international trade flows.

Mark Cabana, head of U.S. interest rates strategy at Bank of America, said history has showed a counterintuitive relationship between the growing federal debt and the rate the U.S. pays on it.

“There’s a lot of discussion about how the U.S. should not borrow, should not engage in fiscal stimulus for fear of seeing interest rates rise too much,” he said. “But in practice, typically what you see is that as debt-to-GDP has risen, you’ve seen interest rates fall.”

That dynamic has been happening, he said, because expectations for economic growth have been lower, giving investors fewer attractive options of where to put their money and coinciding with a large increase in savings around the world.

Meanwhile, an aging population has increased demand for safe assets like U.S. government bonds as pension funds and insurance companies serve a larger population of people more likely to need payouts in the near term.

Those factors suggest that directing investor money toward financing government spending won’t necessarily be diverting funds for other purposes and could be put to better use.

“If in fact there is a surplus of investable funds around the world, why not make use of it to finance public investment?” said Lou Crandall, chief economist at Wrightson ICAP.

In fact, many experts say, higher rates and higher inflation would actually be a positive sign that the U.S. has climbed its way out of a productivity funk because it’s investing in the economy in useful ways. Indeed, Biden’s stimulus talk has led rates to tick up slightly.

“To some extent, that’s what some of this very recent interest rate increase has been,” Cabana said. “It’s been expectations for better future growth and inflation because you have the possibility for hopefully some productive fiscal stimulus to come.”

This raises the question of how much is too much before dangerous inflation shows up, something that proponents of “modern monetary theory” — an economic philosophy that says talk of “paying for” government spending has it all wrong — have long said should be the central focus.

“I don’t care if [the Congressional Budget Office] says, ‘Oh it’s a great bill, it doesn’t add to the deficit.’ I think that’s asking CBO for the least useful feedback,” said Stephanie Kelton, a professor at Stony Brook University and one of the most prominent minds behind MMT.

“The question is, does the economy have the capacity to safely absorb that $3 trillion?” she added.