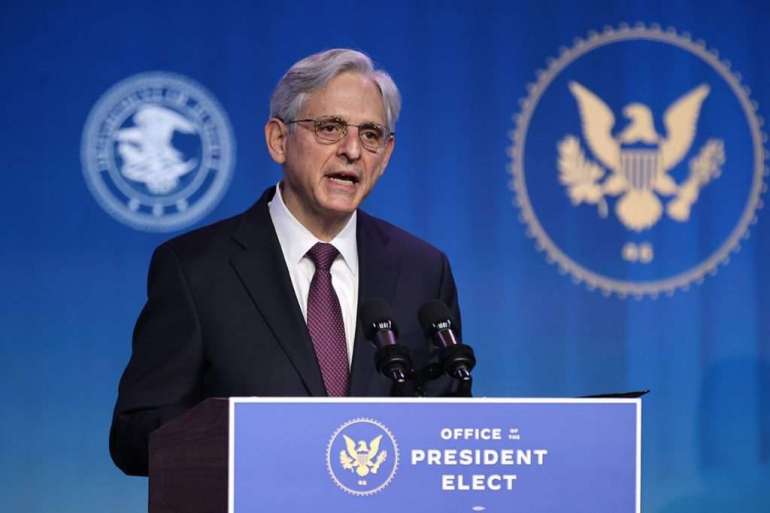 But, he added, “I think, once we have the leadership at Main Justice, we should potentially turn to judges because some of those vacancies are outstanding.”

At the center of Biden’s efforts to put his mark on the DOJ is his pick for attorney general, D.C. Circuit Judge Merrick Garland. Garland is expected to soon get a hearing, though just how quickly is unclear.

The incoming chair of the Judiciary Committee, Sen. Dick Durbin (D-Ill.), said he is planning to negotiate with Republicans to see if the customary 28-day wait between official nomination and hearing can be waived for Garland.

“As soon as we have the paperwork and a decent … interval has occurred, we want to bring him before the committee,” Durbin said. “We need an attorney general in this country and sooner the better.”

A White House spokesperson declined to comment on the delay in submitting Garland’s formal nomination paperwork. However, Biden did not announce his selection of the veteran jurist and failed Obama Supreme Court nominee until Jan. 6, after most other Cabinet picks.

Biden appeared to have waited to announce his attorney general nomination and other choices for top DOJ slots until the results of the runoff elections in Georgia indicated that Democrats would win control of the Senate.

Adding to the scheduling complications: The membership and leadership of the Judiciary Committee have been in limbo due to a standoff between Senate Majority Leader Chuck Schumer and Minority Leader Mitch McConnell over a key Senate rules package. The main fight over the package was resolved Monday, but language still needs to be finalized, leaving committees still in a state of uncertainty.

But even with the committee in place, questions remain about whether its members should work through Biden’s entire eventual slate of DOJ nominees, or confirm only the top ranks of officials before shifting focus to filling empty seats in circuit and district courts. Democrats have been deeply frustrated by Republicans’ ability to stock the federal bench with conservative jurists while blocking liberals from consideration, cementing the right’s hold over the judicial branch for a generation or more.

“The judicial nominees cannot be after the deputy assistant secretary of whatever department. … They need to see it as a top priority and move it ahead of the other nominees,” said Caroline Fredrickson, who spent a decade as president of a group for liberal lawyers and judges, the American Constitution Society. “These are lifetime appointments. … Just front-load them.”

Deciding which nominees should wait could be difficult. The Senate-confirmable posts at the Justice Department include the officials who oversee enforcement of antitrust, civil rights and tax laws, as well as the officials who ladle out law enforcement grants, regulate firearms and run the Drug Enforcement Agency. There are also U.S. attorneys and U.S. marshals for each district nationwide that will require confirmation.

The Judiciary Committee also has sign-off on key immigration nominees at the Department of Homeland Security and even a Commerce Department official who handles patents and trademarks.

There’s no requirement that each nominee have a hearing, but if Democrats shortcut the process, Republicans can slow the next stage when Democrats seek to approve nominees on the Senate floor.

Fredrickson, now with the Brennan Center for Justice at New York University, said she’d rather see the Justice Department press on with acting officials and interim U.S. attorneys for a while, if doing so will allow Biden to get more judges on the bench.

“There are many qualified lawyers in the Justice Department who can step in and be acting,” she said.

It’s unclear whether or when Biden plans to replace the top federal prosecutors for the 93 districts across the country. In a memo last week, a DOJ official said the administration wasn’t moving immediately to oust the officials currently doing those jobs.

“All remaining United States Attorneys and United States Marshals have been asked by the incoming administration to continue to serve for the time being,” DOJ’s longtime administrative chief Lee Lofthus wrote.

Some of the considerations are quite delicate. Several acting U.S. attorneys are handling politically sensitive inquiries into matters related to the Trump administration. At least one, the top federal prosecutor in Delaware, is conducting a criminal investigation into the financial dealings of President Joe Biden’s son, Hunter Biden.

The head of a group pushing for confirmation of liberal judicial appointees and the expansion of the federal bench agreed judges should get priority, but said the White House should sign off on some judicial picks first.

“Justice Department nominees will undoubtedly be the priority out of the gate for the Judiciary Committee since there are named individuals already pending, and the first wave of judicial nominees have not been named yet. But once they are, we want to see the committee prioritize them with the same urgency Republicans did for Trump’s picks,” said Brian Fallon, co-founder and executive director of Demand Justice.

With only a handful of top Justice Department picks announced by Biden thus far, the activists’ call to focus on judges may be intended as much for the White House as the Senate, seeking to convey that filling judicial slots should not get lost amid the thousands of political appointments Biden will make in the coming months.

Biden’s team has responded to the calls for urgency by moving during the transition to start the process of soliciting and vetting potential judicial picks. Incoming White House Counsel Dana Remus wrote to senators before Christmas, asking them to put forward nominees for the roughly 40 district court vacancies unfilled by the Trump administration. That number is expected to grow in the coming weeks as Democratic-appointed judges announce retirements.

Virtually all current vacancies are in states with Democratic senators, since Republicans did leave in place the so-called blue-slip policy for district-court-level judgeships, giving home state senators a de facto veto over nominees from their states. Durbin has not said whether he will follow the same policies the GOP did under the most recent Judiciary chairs, Sens. Chuck Grassley of Iowa and Lindsey Graham of South Carolina.

In her letter, Remus asked senators to submit potential nominees by Jan. 19, but sources close to the process say few have met that deadline. Many senators utilize formal committees that consider which applicants to endorse and make recommendations. Remus also asked senators to consider less traditional candidates, such as public defenders and legal aid lawyers, who might be less prepared than law firm partners to produce a detailed application on short notice.

“Many of their screening committees are currently stacked with corporate lawyers and prosecutors, which explains why they always recommend exactly those types of lawyers,” Fallon said. “Biden’s call is having the helpful impact of causing these existing systems to be completely reformed. “

The sifting of potential judicial resumes at the White House is being conducted by Senior White House Counsel Paige Herwig, with assistance from Special Counsel Tona Boyd, a person familiar with the situation said. Herwig is a former counsel to Sen. Dianne Feinstein (D-Calif.), while Boyd is a former counsel to Sen. Cory Booker (D-N.J.). Both senators sit on the Judiciary Committee.

The extreme sense of urgency many Democratic activists and Hill staffers express over the judicial nomination issue stems from searing memories of events 12 years ago, when President Barack Obama’s White House was viewed as being slow to put forward judicial nominees — even though Democrats had the supermajority required at the time to overcome any GOP filibuster.

In August 2009, Sen. Ted Kennedy (D-Mass.) died. His absence and eventual replacement by Sen. Scott Brown (R-Mass.) gave Republicans the power to slow and block Obama nominees through the filibuster. The GOP also aggressively used the blue-slip process to hold up many circuit and district court nominees.

The slowdown in confirmations persisted for several years until former Senate Majority Leader Harry Reid deployed the so-called nuclear option in 2013, breaking the logjam and allowing Obama to win confirmation of four nominees to the powerful D.C. Circuit Court of Appeals.

In order to expedite the Senate Judiciary Committee’s work this year, Democrats have discussed the possibility of holding a confirmation hearing where Garland would appear alongside Biden’s picks for DOJ’s No. 2 and 3 slots, Lisa Monaco and Vanita Gupta.

“We’ve talked about it, but we haven’t made a final decision,” Durbin said. “Historically, it’s always been the AG by himself. What the Republicans did for the first time is they combined deputy and associate. I won’t rule it out … but my inclination is to stick with the AG as separate.”