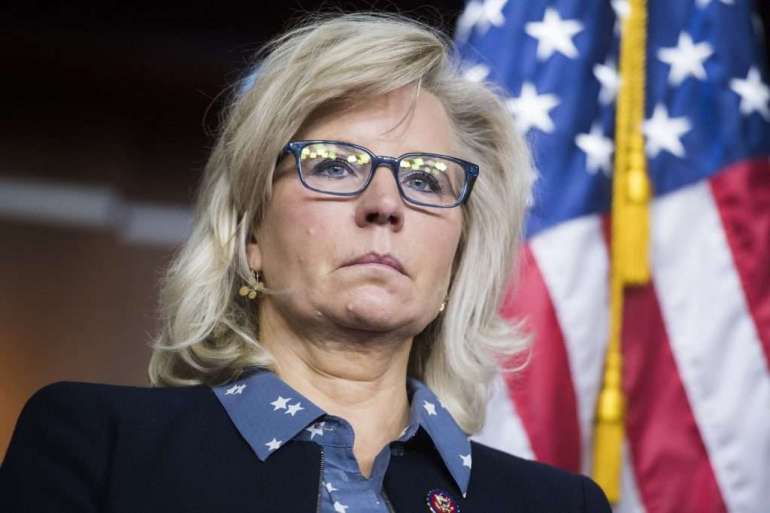 “No,” Cheney replied, “I think you cannot be blown off course by the fluctuations in the public opinion polls.”

The exchange echoed for days as a window into what critics regarded as Cheney’s breathtaking arrogance, which was widely perceived as a primary engine behind the administration’s plunge into a war that had lasted far longer — and was far more costly — than anything Bush had prepared the country for at its outset five years earlier.

The Cheney-Raddatz exchange springs to mind now, 13 years later, as Rep. Liz Cheney (R-Wyo.) has given the family probably its most favorable mainstream media coverage in three decades — back to the days when Dick Cheney was widely portrayed as the steady, understated, Defense secretary of the first Gulf War, rather than the sinister vice president scheming in the shadows of the second Gulf War.

If the Washington news media thinks the Cheneys are doing right by standing up to Donald Trump over his role in the Capitol insurrection, father and daughter surely must wonder privately if they are somehow doing wrong.

What’s notable, though, is that Liz Cheney has shed her old reputation for living off her father’s name and ideas, and vaulted into her new status — brave truth-teller in a party dominated by craven Trump enablers — mainly by drawing on a family legacy: indifference to dissenting opinion.

Liz Cheney surely knew there would be fierce backlash from within the House Republican caucus, where she is third-ranking leader, over her criticism of Trump and vote to impeach him. Her response, in essence, was: So?

What looks arrogant and even contemptuous in one light looks principled and conscientious in another. Her move raises the question of whether paying a near-term cost — in challenges to her leadership position and vitriol from Trump partisans — can pay a long-term dividend in enhanced national stature.

It may be too early to get carried away. There’s still some time for Liz Cheney to squirm out of a courageous position into something more like the groveling accommodation practiced by other Republicans who share her disdain for Trump but are afraid of him. House Minority Leader Kevin McCarthy, whose milder criticism of Trump left him less exposed, has already started a climbdown.

But as long as Liz Cheney keeps her nerve, she will be one of the more interesting people in contemporary politics, as Republicans chart their future in the wake of the Trump presidency. She offers a case study in a subject that interests both her father and Donald Trump: the psychological dimensions of leadership.

Dick Cheney’s leadership style was shaped by a stoical tradition in American culture, one celebrated in frontier mythology, in which words are used sparingly, actions alone convey strength, and personal flash and hunger for approval suggest weakness and sissification. Donald Trump’s leadership style reflects more recent cultural trends, shaped by everything from Las Vegas to pro wrestling. Bombast and self-promotion aren’t simply means but ends as important, or more important, than any policy objective.

But these two different styles have some unifying traits: Both believe in the optics of power, and that the projection of fearlessness creates its own reality. You have power because you assert that you do, and the rest of the world responds. Both Dick Cheney and Trump resisted public acknowledgements of uncertainty or even complexity in their thinking. Both were loath to admit error or issue apologies.

Liz Cheney, who at 54 is so clearly a product of her father’s values, offers the prospect of putting the two leadership styles to a direct test, one versus the other. This is especially true because younger-generation Trump acolytes, such as Donald Trump Jr., 43, and cocky popinjay Rep. Matt Gaetz (R-Fla.), 38, have made it their mission to punish her.

To the news that Gaetz will rally on Thursday against Liz Cheney in Wyoming, an unnamed Cheney aide told the Washington Examiner: “Rep. Gaetz can leave his beauty bag at home. In Wyoming, the men don’t wear make-up.” Could any actual Wyoming voters have gotten the reference? It is apparently to Gaetz’s boast in an HBO documentary that he does his own makeup for TV hits. No matter: Liz Cheney’s aide could be sure that Gaetz himself got the reference, and even those who didn’t get it must have guessed it was intended as belittling insult.

It is hard to know Liz Cheney’s real calculation. Perhaps, at one end of the spectrum, she is thinking, Standing up to Trump could cost my career, but I’d rather lose than surrender my dignity by kowtowing to him or excusing his outrages. Or maybe she’s more confident: I know my state and I know my House colleagues. Trump can’t lay a glove on me.

Whatever Liz Cheney is thinking, the reality may be closest to this. For all the hundreds of decisions a politician makes in a year, most consequential careers are defined by being right—or wrong—on a small handful of big questions. On these, the shrewd long-term position is often quite different than the short-term “safe” one. Many politicians who played it safe voting against civil rights in the 1960s spent the rest of their careers trying to rehabilitate their reputations. Hillary Clinton’s authorizing the Iraq War had her in the Democratic mainstream in 2002; Barack Obama’s opposition helped power him to the presidency just six years later.

If the GOP is in the midst of a reappraisal of Trump—not obvious yet but virtually inevitable eventually—Liz Cheney will look more formidable, and actually be more formidable, for having stood against most of her party now. Gaetz’s harassing of her now could turn out to be an in-kind contribution later.

In his 2008 interview with Raddatz, Dick Cheney defended his stubbornness with a reference to Abraham Lincoln. Think of how history would been different if he had “paid attention to polls” during the Civil War. That’s probably a misreading of Lincoln, who was keenly attuned to shifting politics and, far from refusing to shift his thinking, once said, “I claim not to have controlled events but confess plainly that events have controlled me.”

Still, the larger point holds: Ultimately what matters is whether one is judged by history to be right on the main question, more than zigs and zags on the way to finding an answer. Twelve years later, neither expert nor popular opinion on the merits of the Iraq have moved much in Dick Cheney’s direction. Liz Cheney’s willingness to stand up to Trump is likely a more promising historical bet.