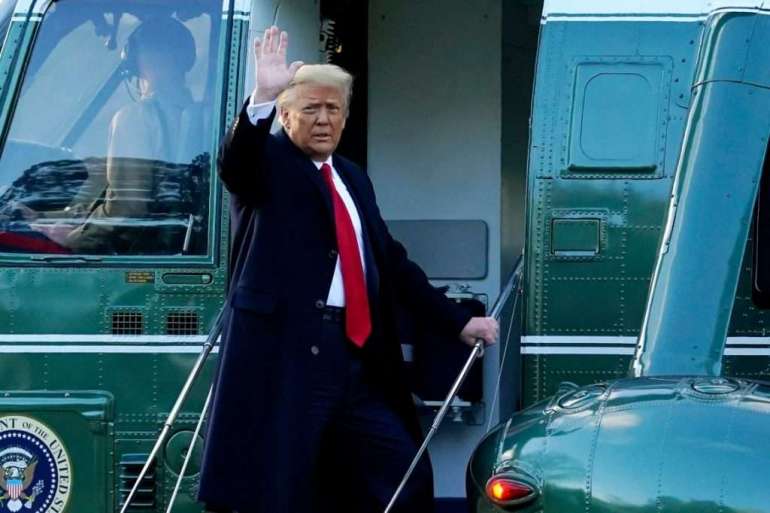 GOP leaders condemned him for helping incite the riots that threatened their lives and ended five others. House Minority Leader Kevin McCarthy said Trump bore “responsibility” and called on him to accept blame for the Jan. 6 attacks. Senate Minority Leader Mitch McConnell, who hasn’t spoken to Trump since Dec. 15, made no secret of his disgust over the former president’s role in the chaos that erupted at the Capitol. Ten Republican members of the House voted for Trump’s impeachment.

But that was then. Now, the GOP is engaged in a delicate dance to keep Trump and his base of voters in the fold while not seeming too beholden to him. Without Trump’s cooperation, the party fears losing a fundraising giant just as it pivots to a midterm cycle in which it hopes to regain majorities in each chamber of Congress.

“What you’re seeing is not a particularly shocking move, which is taking the path of least resistance,” said a GOP strategist. “There’s no real benefit to fighting this war if you want a future in politics.”

In the weeks since the Capitol rampage, top Republicans have tried cozying back up to Trump while preserving some semblance of distance — a line-straddling that involves a mix of obsequiousness and detachment as they tend to opposite wings of the party.

Republican National Committee Chair Ronna McDaniel tried her hand at the balancing act on Wednesday. In an Associated Press interview that morning, she re-affirmed that the GOP would decline to put its thumb on the scale for any one candidate in the party’s next presidential primary — a declaration of neutrality that once again prompted questions about how, or if, the party plans to utilize Trump in Republicans’ midterm campaign to reclaim the House and Senate.

McDaniel later clarified on Fox News that the RNC has bylaws that preclude it from endorsing candidates in GOP primaries. But her comments were a contrast to 2020, when Trump leaned heavily on GOP officials to prevent a trio of challengers from ever gaining steam in the Republican primary, and would likely demand their loyalty if he were to proceed with another White House bid in 2024.

Not long after her interview was published, however, the RNC chair was rallying to Trump’s side, releasing a statement fiercely condemning Trump’s upcoming impeachment trial.

“Make no mistake: Democrat leaders’ vendetta against President Trump has always included impeachment, with many pledging to do so even before he took office,” she said, adding that the post-presidential impeachment trial was both “unconstitutional” and “a distraction from the important issues Americans want Congress focused on.”

In another sign that the party views Trump as a tool for survival, McCarthy put on a brave face for a lunchtime meeting with the ex-president on Thursday — just weeks after it was reported that the former president called the top House Republican a “p—-.” In the gilded lobby of Trump’s Mar-a-Lago estate, the two men posed for a photo and publicly committed to working together to put the GOP back in control of the House in 2022.

“A united conservative movement will strengthen the bonds of our citizens and uphold the freedoms our country was founded on,” said McCarthy in a statement following the meeting.

The get-together on Trump’s turf, along with the grinning photograph that followed, marked a dramatic turnaround for McCarthy, who was polling colleagues on whether he should call on the former president to resign as recently as two weeks ago.

But even as McCarthy was weighing whether to create some distance, his political team was still using a fundraising website for next year’s midterm elections under the domain name, “Trump’s Majority.”

Trump’s stranglehold on the GOP is due to a variety of factors. Chief among them is what has happened to the party when he is not fully on board with it. The day before the Capitol riots, Republicans lost two critical Senate seats in Georgia. And, looking back, party operatives lay almost all the blame on Trump for putting far more energy into questioning his own election result in the state than in boosting the two down ballot candidates.

“In Georgia there is no question — and no one should say otherwise — he is the reason we lost,” said one GOP official. “I’ve never been more confident in a post-election analysis.”

Trump’s advisers say the former president will be active in the upcoming midterm races. And, for that reason, some Republicans praised efforts to afford him a voice and ensure that his supporters still feel at home in the GOP.

“We’ve got to be neutral and we have rules that require us to be neutral. But by the same token, we wouldn’t be smart if we discounted those 74 million votes,” said Barnett, referring to the number of votes that were cast for Trump in November.

“We’ve certainly got to find a way to integrate those people and those voters because we can’t win without them,” he added.

But another explanation for Trump’s stranglehold on the party is the vengeance that he often seeks. Even decamped in Palm Beach without his Twitter account, he has made clear he plans to wield his power against any Republican who crosses him.

After the House impeachment votes, Trump was briefed by aides on each of the 10 Republicans who called for his ouster. And since then, he and his allies have directed their ire at one Republican in particular — the third ranking GOP member in the House, Rep. Liz Cheney of Wyoming.

Trump friend and ally Rep. Matt Gaetz, R-Fla., flew north to Cheyenne, Wyo. on Thursday to rally against his colleague, and Trump’s team commissioned a poll that painted a bleak picture of Cheney’s re-election prospects, then promptly blasted out the results to the press.

“Liz Cheney’s decision to impeach President Trump makes her extremely vulnerable,” a memo from Trump pollster John McLaughlin said. “The strong voter sentiment in this survey suggests there could be similar results for other Republicans who voted for impeachment.”

— with reporting by Melanie Zanona