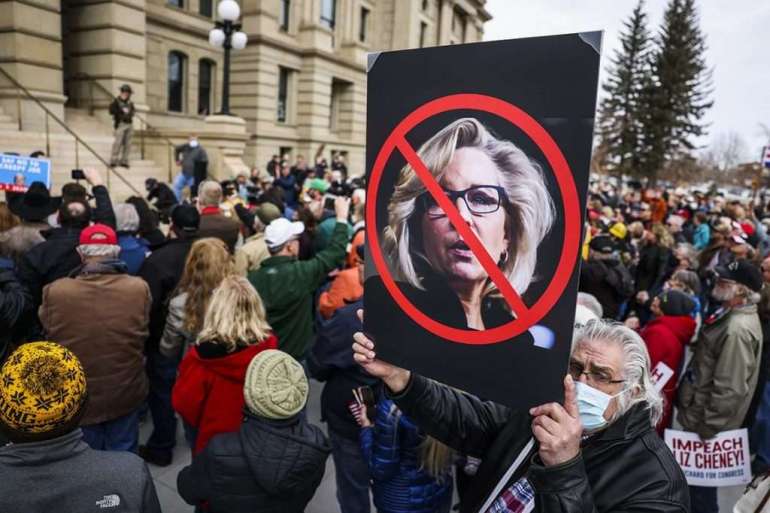 The GOP leader will sit down for a face-to-face conversation with Greene later this week, his office said. But whether McCarthy actually removes her from her committee assignments, as many Democrats and even a few Republicans are calling for, depends on how his private interaction with Greene goes.

So far, Greene has remained publicly defiant, though she has scrubbed some of her past social media posts. And over the weekend, she claimed that she’d spoken with Trump and had his full backing, which could make it tougher for McCarthy to punish Greene.

“I think Republican leaders ought to stand up and say it is totally unacceptable what she has said,” Sen. Rob Portman (R-Ohio) told CNN’s Dana Bash on “State of the Union” on Sunday.

When asked whether Greene should be stripped of her seats on the House Education and Labor Committee and the House Budget Committee, Portman said it could send a strong message.

“I assume that is something they’re looking at, and I wouldn’t be surprised if that happens,” he said. “And you know, I think that is the way to send a message. The voters who elected her in her district in Georgia, you know, ought to be respected. On the other hand, when that kind of behavior occurs, there has to be a strong response.”

What the GOP decides to do about Cheney and Greene will offer significant clues about the direction of the party in the post-Trump era. Some Republicans are warning that punishing Cheney while letting Greene go untouched — and thereby aligning the party even more closely to Trump — could be a major black eye for the party heading into 2022.

And next week, Trump’s impeachment trial will begin in the Senate. But despite a slew of Republicans, including Minority Leader Mitch McConnell (R-Ky.), condemning Trump for inciting a mob that attacked the Capitol, a conviction is highly unlikely; 45 Republicans have said that putting a former president on trial is unconstitutional.

“But the reality is this: This is a time to choose. It’s a time to choose what we’re going to be,” Rep. Adam Kinzinger (R-Ill.), who voted for impeachment and is launching a new PAC aimed at restoring conservative principles in the GOP, said on NBC’s “Meet the Press” on Sunday. “And my goal in launching Country1st.com, number one, is just to say, look, let’s take a look at the last four years, how far we have come in a bad way, how backwards-looking we are, how much we peddle darkness and division.”

“And that’s not the party I ever signed up for, and I think most Republicans didn’t sign up for that,” he added.

The looming and messy intraparty battle comes as McCarthy has pleaded with Republicans to stop publicly attacking one another. The minority leader, who is desperate to keep his ranks united as they turn their focus to next year’s midterms, has been trying to make amends with Trump and even met with him at his Florida resort last week. After the rendezvous, McCarthy made clear that the former president would be an integral part of their efforts to win back the House.

“United and ready to win in ’22,” McCarthy tweeted after his meeting with Trump.

Yet some Republicans, including firebrand Rep. Matt Gaetz of Florida, have blatantly ignored McCarthy’s pleas for party unity. Last week, Gaetz even campaigned against Cheney by flying to Wyoming, where Donald Trump Jr. called into the rally via speakerphone. Notably, the former president’s son has also offered his praise for McCarthy as the GOP leader.

“I’ve seen firsthand since 2016 that @GOPLeader has been the strongest House GOP leader of my lifetime,” he tweeted, alongside a picture of Trump and McCarthy from their recent meeting. “He’s always fought for my father & our movement. Proud to call Kevin a friend & I’m excited to work closely with him to to take back the House in 2022!”

Democrats, meanwhile, are already signaling that their campaign strategy in 2022 will center heavily on trying to yoke the entire Republican Party to Greene and the fringe QAnon movement. Over the weekend, Speaker Nancy Pelosi’s office put out a news release listing McCarthy’s party affiliation as “QAnon” instead of the GOP.

Biden wants $1.9 trillion. Republicans want a lot less. POLITICO’s Victoria Guida breaks down what would really save the Covid economy — and why we shouldn’t care too much about the price tag … for now.

And a spokesperson for the House Democrats’ campaign arm also put out a statement slamming McCarthy and the National Republican Congressional Committee chairman, Rep. Tom Emmer of Minnesota, for embracing Greene. While both men raced to condemn Greene last summer after POLITICO uncovered a trove of racist Facebook videos from her, leadership did little to stop her from winning her primary runoff race.

“Minority Leader McCarthy and NRCC Chair Tom Emmer have not only caved to the mob and welcomed QAnon conspiracist Marjorie Taylor Green into their caucus, they’re putting her front and center as a key player,” said Brooke Goren, a spokesperson for the Democratic Congressional Campaign Committee. “Americans have died at the hand of the QAnon mob, now vulnerable House Republicans will have to answer for that violence.”

House Democrats will try to force a floor vote this week on a resolution to expel Greene from Congress. While expulsion is highly unlikely, since it requires two-thirds support in the House, the vote would still force every single Republican to go on the record over Greene. Democrats are also calling for censure, as well as to remove Greene from her committee assignments — a move that has the backing of at least one House Republican.

“I’d certainly vote her off committee,” Kinzinger said. “In terms of eviction, I’m not sure because I’m kind of in the middle. I think a district has every right to put who they want there. But we have every right to take a stand and say, ‘You don’t get a committee.’ And we definitely need to do that.”