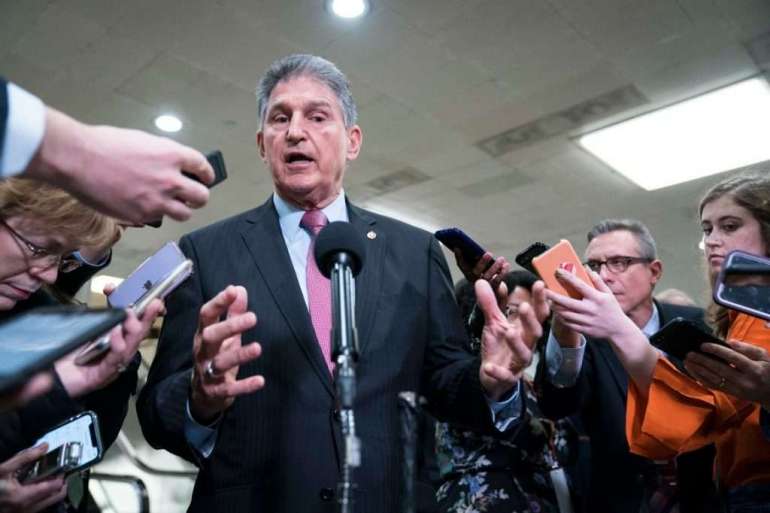 Manchin and Sinema’s opposition to eliminating the legislative filibuster — which requires a 60-vote threshold for most legislation — is the main reason No Excuses is putting a call out for possible challengers. Progressives have increasingly pressed Senate Democrats and President Joe Biden to end the filibuster, arguing that in an evenly divided Senate it will be nearly impossible to find enough Republicans to pass major pieces of Biden’s agenda.

“The only real way to pressure any of these folks and hold them accountable to their promises is to threaten their power, and threaten the seat that they hold and threaten their reelection,” said Chakrabarti, who is also a former chief-of-staff to Ocasio-Cortez. “We sort of have this theory that the voters in Arizona and the voters in West Virginia would care more about action, they care more about jobs and their community and money in their pockets than they do about an arcane Senate rule called the filibuster.”

In an email to supporters Tuesday, the PAC will say, “Help us find the next AOC to replace Manchin and Sinema.” It urges its grassroots base to aid them to “run ads telling Joe Manchin and Kyrsten Sinema that they will be primaried and replaced in 2024 if they join with Republicans to shrink their own party’s pandemic, climate, and economic plans.”

Exley, who also co-founded Justice Democrats with his two political partners — the group that recruited Ocasio-Cortez to run for Congress — said their new project’s goal is to “shock” Manchin and Sinema “into seeing reality” and “how angry Democratic primary voters are going to be” if they continue to support the filibuster. The progressives also cited Manchin’s previous suggestion that he might not support $2,000 direct payments, expressing interest in a more targeted approach, as a reason he is a target.

The search campaign will start in the coming weeks with recruitment ads across radio, digital, and newspapers in West Virginia and Arizona, said Trent. They will also ask local Democrats and voters to nominate potential candidates.

There’s a possibility the 73-year-old Manchin won’t run for another term. But the PAC is looking for challengers anyway, having learned the importance, they said, of early recruiting from their efforts to back primary challenges to House Democrats.

Though the organization is in its early stages, it could emerge as a Senate version of Justice Democrats. In its short existence, Justice Democrats has helped oust a handful of powerful House Democrats in the last few years, including former Reps. Joe Crowley, Eliot Engel and Lacy Clay, and infuriated establishment Democrats who accuse the group of harming the party.

This new effort is also likely to frustrate leading Democrats as they attempt to keep the party united while corralling their small majorities in the House and Senate to pass Biden’s agenda.

But insurgent progressive groups such as the No Excuses PAC argue that intraparty challenges are necessary — and that politicians should be forced to defend their seats even within their own party.

In taking on Manchin and Sinema, the political action committee will be trying to accomplish something the left has struggled to achieve in recent years: compete in conservative and swing seats. Justice Democrats has so far failed to flip a Republican-held district.

Manchin is widely viewed as one of the few Democrats who could hold a seat in West Virginia, which has become increasingly red over the past two decades — the progressive PAC admitted there is no Democratic bench in the state. Arizona, however, could provide more opportunities as a purple state that is now represented by two Democrats in the Senate. In November, the state voted for a Democratic presidential candidate for the first time since 1996.

No Excuses PAC predicted it could raise several millions of dollars to campaign against Manchin and Sinema.

“If it comes down to an actual vote on modifying the filibuster and it just won’t pass because of these two, then people are going to be so angry that there will be that national base of donors who really, really love to donate to a campaign to unseat these guys,” said Exley. “It won’t be any problem to raise many, many millions of dollars in that scenario.”

When pressed on the strength of Manchin’s name ID and history of winning in a red state, the group responded that Manchin could be vulnerable to a GOP challenge — pointing to recent comments by Republican Gov. Jim Justice supporting a large stimulus package.

There is a sense of urgency in pushing the two moderate Democrats early in Biden’s presidency, when the party has its best shot at passing big coronavirus relief and other items on Biden’s agenda, Chakrabarti said.

“Pressuring them in 2022 when Dems may no longer have a majority won’t do much,” he said. He added No Excuses PAC is “not looking for more left-leaning Democrats” but rather ones who won’t protect the filibuster.

In addition to searching for challengers to Manchin and Sinema, the group may get involved in open Senate races in Pennsylvania and Ohio in 2022. They also aren’t ruling out a challenge to Senate Majority Leader Chuck Schumer, though they are encouraged by Schumer’s bullishness so far in pushing through Biden’s big relief bill with or without Republicans.

“I don’t know if it’s necessary, it will come down to what [Schumer] actually does,” said Chakrabarti. “It’s an option that we should never throw out. It’s one of the tools in the chest of holding Democrats accountable.”