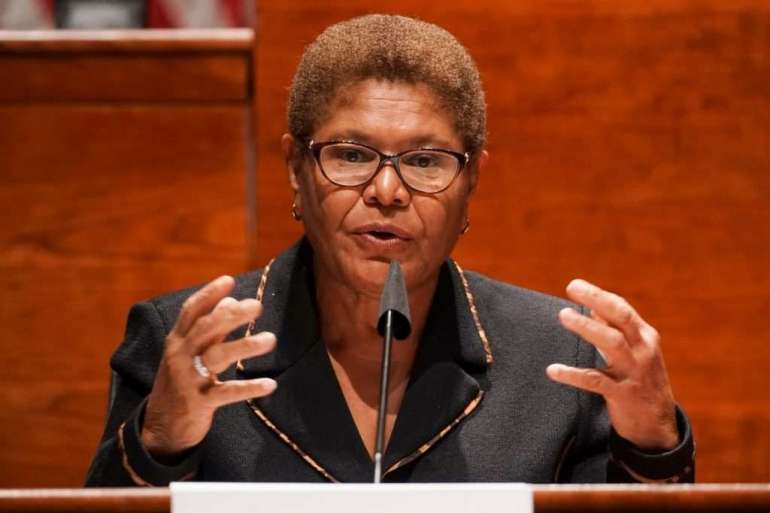 “We can’t wait. We have to go big,” senior Rep. Barbara Lee (D-Calif.) said in an interview. “I hope we can do this in a bipartisan way, but we cannot let down the American people and say, ‘Well we couldn’t get the Republicans to vote for what you need to save your life.’”

The first move for House Democratic leaders will be wrangling the votes for a budget measure this week — a critical step that unlocks the ability to pass bills with a simple majority in the Senate. But it will also require a near-perfect vote-counting operation, as Speaker Nancy Pelosi and her team can’t afford more than four defectors on the floor if all Republicans oppose.

Democrats formally unveiled that budget resolution Monday afternoon, charging 12 committee chairs to start drafting the measure over the next two weeks. But it wasn’t without a brief delay as budget members were told to await sign off from the White House, according to a person familiar with the process. And it comes as Biden met with 10 Senate Republicans, who are pushing for a smaller, $600 billion-plus package.

So far, a handful of centrist Democrats privately aren’t committing to voting for the House budget, hoping to push party leaders to pursue a dual-track approach to Covid relief, according to multiple members and aides. Several in the most vulnerable districts remain anxious that they don’t know what will ultimately be in the massive package: “We have agreed to the height of the Christmas tree, but we haven’t agreed how we’re going to decorate it,” one aide to a moderate member said.

Most of those Democrats are eventually expected to fall in line to back Biden’s top priority. But the hesitation by some centrist Democrats underscore the fraught nature of the negotiations and the competing factions within the Democratic caucus.

Rep. Conor Lamb (D-Pa.), one of the most vulnerable House Democrats, panned the $600 billion proposal from GOP senators, saying it falls far short of the much superior proposal put forth by Biden. “You can’t cover that up with unity or bipartisanship,” Lamb tweeted Monday.

Unlike other debates among Democrats, this one doesn’t fall solely along the typical ideological fault lines between centrists and progressives. This time, some of the differences are emerging between members who lived through the partisan battles over Obamacare and the Recovery Act a decade ago, and those who didn’t.

The centrist New Democrat Coalition is fully supportive of Biden’s $1.9 trillion relief proposal and moving ahead without GOP support if necessary to get it to the president’s desk before mid-March.

“New Dems are in lockstep with the Biden administration on moving a package quickly and a package that meets the scale of both the public health and economic crisis we face,” Rep. Suzan DelBene (D-Wash.), the chairwoman of the large centrist group who took office in 2012, said in an interview. “[Republicans] have the opportunity to work with us right now — we have been working on packages for months.”

But a smaller group of moderates fear the budget process alone will take too long and want Democrats to take up piecemeal bills with GOP help to get some money to struggling Americans — and put points on the board for Biden. They are pushing for a bill with “shots and checks,” with money for vaccine distribution and another round of direct payments.

“We really would like to see targeted relief passed immediately,” Rep. Stephanie Murphy (D-Fla.), who leads the moderate Blue Dog Coalition, said in an interview. Murphy hasn’t decided how she’ll vote on the budget this week, but warned reconciliation could take longer than the roughly six weeks they have. “It doesn’t make sense to wait until mid-March and I think that’s a probably optimistic timeline.”

Senate Democrats, including Majority Leader Chuck Schumer, have warned that the party doesn’t have enough floor time for both approaches if they hope to meet that March 14 deadline. The White House, too, has dismissed the idea of a dual track proposal, which would need the votes of 10 Senate Republicans.

Even most House centrists who normally tout bipartisanship and caution against excessive spending say this time is different. The environment in the House remains as tense and raw as it was in the days just after the deadly riots on Jan. 6, and most Democrats have no desire to extend Republicans a seat at the negotiating table, especially after so many voted against certifying the election results.

Moderates in both chambers will be a key faction for the Biden White House, and Vice President Kamala Harris has spent the last week extending outreach to several of those key members, including Murphy, according to people familiar with the plans. The Blue Dog Coalition will also meet Tuesday night with Biden’s legislative affairs director Louisa Terrell.

Some moderates in both chambers remain concerned about parts of the minimum wage bill or the stimulus checks at the center of Biden’s package. But many are already saying they’ll likely back the administration in the end.

“There’s an opportunity there to make some changes to it. We’ll see. But push comes to shove and it doesn’t get changed, I’ll vote for the $1.9T,” Sen. Jon Tester (D-Mont.) said of Biden’s plan.

Senate Democrats have showed confidence that they will have all 50 of their members on board for the budget this week. With the support of Tester, most are now looking to Sens. Kyrsten Sinema of Arizona and Joe Manchin of West Virginia, two moderate Democrats who have not stated their intentions. Still, few are worried about the budget resolution at this point.

If either Manchin or Sinema oppose the budget maneuver, it could force the party to ditch the reconciliation process altogether — potentially forcing Congress to start from scratch as Biden attempts to orchestrate a massive vaccination campaign while simultaneously shoring up a flatlining American economy.

Even if all Democrats agree to reconciliation, there are many looming headaches as party leaders decide precisely what policies should make it into their go-it-alone approach.

Members of the Congressional Progressive Caucus say Democrats should be dreaming even bigger, calling Biden’s $1.9 trillion plan a “floor” not a ceiling. They recently sent a letter to Biden calling for monthly stimulus checks, far above the Biden administration’s one-time $1,400 check.

Many of those Democrats argue their party should be creative in flouting certain budgetary limits if it means including policy measures like the $15-an-hour minimum wage or paid family leave. House Democratic leaders discussed adding the minimum wage increase to the reconciliation package during a private call Sunday, according to multiple sources.

“We’ve been working on these things for years, and if we can’t do it now, then when? So yes, we will get it done,” Lee, a long-time budget and appropriations member, said separately of including those long-time progressive priorities.

Meanwhile across the Capitol, the group of 10 Senate Republicans have drafted their own smaller plan that they hoped would spur negotiations with the Biden administration. And while Biden hosted that group at the White House on Monday, few Democrats believe that approach will work.

Biden officials have insisted that Republicans could still support the final reconciliation package, though long-time GOP lawmakers have dismissed the idea.

“You’re not going to get Republican votes for a reconciliation package, it’s just not going to happen,” Rep. Tom Cole (R-Okla.), a senior GOP member, said in an interview.

Burgess Everett and Christopher Cadelago contributed to this report.