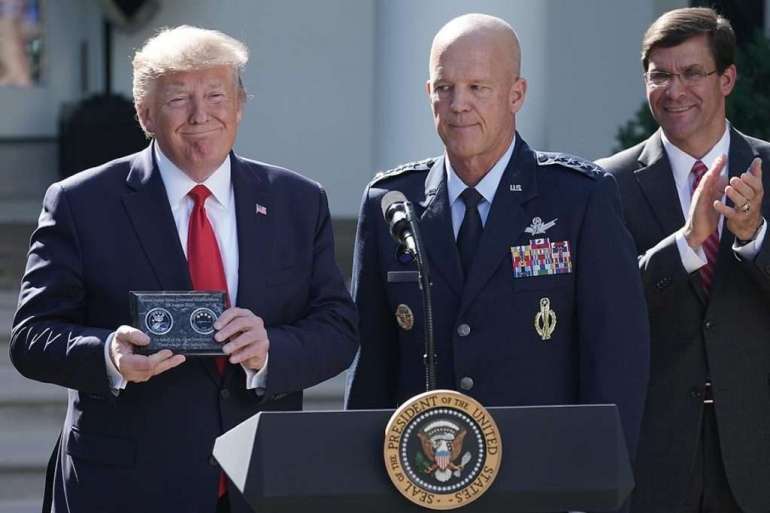 White House spokesperson Jen Psaki seemed caught off-guard on Tuesday when asked about Biden’s thoughts on the future of the service.

“Wow. Space Force. It’s the plane of today,” Psaki said, referencing a question in an earlier press briefing about Trump’s proposed paint scheme for Air Force One. She added, not particularly helping her cause, that she would “check with our Space Force point of contact. I’m not sure who that is.”

A day later, after angry calls from Republican lawmakers demanding an apology, Psaki told reporters the the Space Force has Biden’s “full support.” The comment seemed to put the dust-up to rest, but it also raised new questions about how seriously the White House — and the American public — will treat the new service in a post-Trump world.

Before the inauguration, questions had swirled as to whether the Space Force would be one of Trump’s initiatives that the new president would cancel. But the service was created by Congress and it would take an act of Congress to get rid of it. And the concept of a separate space service came from both political parties — not Trump.

Still, those vested in the service had been looking for signs of how the Biden team felt about it. One military space official, who asked not to be named, said Psaki’s comments didn’t go over well.

“I think there’s some frustration inside the military that there was perceived dismissiveness, especially when it could have obviously been avoided,” this person said. “Not sure if it’s a ‘rookie mistake’ or if it was purposeful, but it’s definitely become an unnecessary distraction.”

While the service has accomplished much in its first year — it has leadership, staffs, uniforms, and a $15.5 billion budget — lawmakers and experts are skeptical that the Space Force can shed its links to Trump anytime soon, and that, if it ever happens, it will take decades.

“It’s like trying to get Obama out of Obamacare,” said Brian Weeden, the director of program planning at the Secure World Foundation, a nonprofit organization that promotes sustainable uses of space. “It’s not possible at this point.”

Retired Air Force Gen. Hawk Carlisle agreed the service became politicized in part due to Trump. “He had a tendency to be a lightning rod,” he said.

He added that Congress first began talking about the idea of a Space Corps in 2017 and the service was established in 2019. That’s far short of the decades of discussion that drove the creation of the Air Force more than seven decades ago, or even the seven years of debate that preceded the establishment of U.S. Space Operations Command in 1987. In short, the American public had less time to get used to the Space Force.

“I don’t disagree that we needed a separate service, but [I] think we needed to talk about it and have the dialogue,” said Carlisle, the head of the National Defense Industrial Association. “We didn’t spend the time with that fulsome dialogue to get everyone on board. Instead, it was kind of forced through.”

Gen. Jay Raymond, the chief of space operations, said Wednesday that he had yet to talk to Biden about the Space Force’s mission, and that he would welcome the opportunity to do so. But he acknowledged that the national security space mission can be hard to understand for most Americans.

“Space doesn’t have a mother. You can’t reach out and hug a satellite. You can’t see it. You can’t touch it. It’s hard to have that connection,” Raymond told reporters.

One of the people who doesn’t quite get it: His own mother, who “called me a couple months ago after watching a television segment about GPS. She said, ‘Did you know the Air Force and Space Force do things with GPS!’ I’m like, ‘Mom, that’s what I do.’”

Despite this, he said the Space Force’s communications strategy has been “excellent.… I really believe we are communicating really well in a number of areas.”

Lawmakers say Americans will get there, but it will take time.

“I think it’s going to happen naturally. As we go forward as a country and the Space Force continues to do its job and we see near-peer adversaries creating trouble in different areas including in the space domain, more and more people will be really happy that we have a Space Force,” said Rep. Doug Lamborn (D-Colo.), a member of the House Armed Services Committee.

Others, however, thought Raymond’s comments that the service’s outreach has been exemplary was tone-deaf. Almost from the beginning, the service was the butt of jokes on late-night television and even spawned a comedy series on Netflix starring Steve Carell. The show even made references to Trump’s tweets and interference from the first lady on uniform design. The Space Force, they say, needs to show Americans how it’s keeping the country safe.

One of the difficulties in making that argument is that much of the Space Force mission is classified. That means in many cases, the Space Force must explain to people that it exists to fight threats that it can not name or describe with any specificity.

That must change, said Rep. Mike Rogers of Alabama, the top Republican on the House Armed Services Committee and one of the original proponents of creating a space service. His home state also stands to gain from the recently approved relocation of U.S. Space Command headquarters to Redstone Arsenal.

He said the Space Force can best make its case to the public by declassifying information that shows the importance of satellites and the threats posed by China and Russia.

“Once we explain that … I think that they’ll see it completely differently,” Rogers told POLITICO. “But right now, all that stuff is classified, and it’s insane.”

“That’s gonna have to be done for the American people to understand exactly why space matters, why these constellations [of satellites] are important, how much they’re involved in fighting and winning wars, what China and Russia and Iran and other countries are doing in space and why we’re vulnerable to it,” Rogers said. “That’s gonna change everything.”

But, the Alabama Republican cautioned, “It’s gonna be a work in progress.”

Bryan Bender contributed to this report.