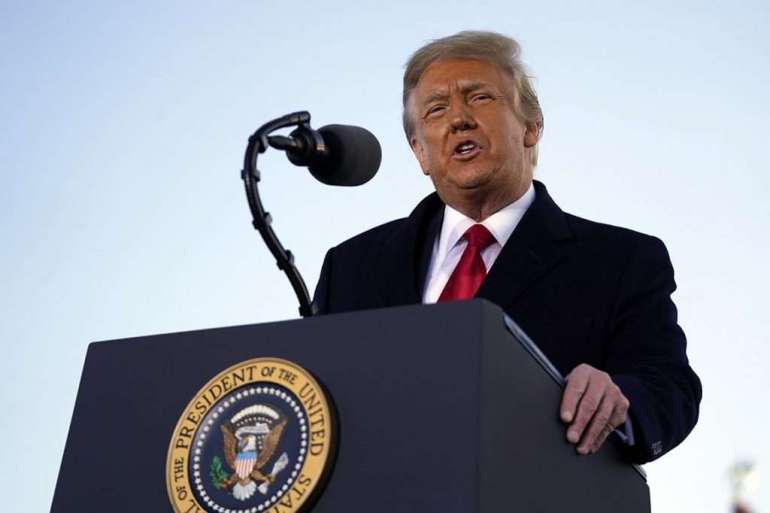 The Constitution’s limited guidance for impeachment says presidents convicted at trial can face two punishments: removal from office and disqualification from holding federal office in the future. Forty-five Senate Republicans have signaled that they are at least open to a constitutional theory that Trump cannot be convicted because there is no office to remove him from.

But a broad swath of the legal community, including prominent GOP lawyers like Chuck Cooper, says this argument is nonsense. The framers always intended former presidents to be eligible for impeachment and trial, they say, or else the prospect of disqualification would be meaningless. And besides, if a president could merely resign to avoid conviction, the impeachment power would be no power at all.

The Senate’s proposed trial rules require a four-hour debate on this subject at the immediate outset of the trial on Tuesday. If the Senate were to agree with the Trump team’s interpretation, the trial would end immediately and result in a dismissal.

But Democrats begin knowing they have the votes to sideline this argument — it requires a simple majority and they anticipate keeping their full caucus united, while picking off some Republicans who have signaled they disagree with the former president’s argument. The House will seek to display the broad, bipartisan support in the legal community along the way.

What is the impeachment trial really about? Playbook’s Rachel Bade says it’s more about convincing the American public — not lawmakers — that Trump should never be able to hold office again.

2. Leahy in the chair

Supreme Court Chief Justice John Roberts will not preside over Trump’s trial, a nod to the fact that he’s a former — not sitting — president. That has left the duties to Senate President Pro Tem Patrick Leahy, a Vermont Democrat. Leahy will be tasked with deciding parliamentary questions and potentially ruling on other disputes that arise. Though the Senate as a whole has the power to overrule the presiding officer, Leahy’s interpretation of the job will help set the tone of the trial. Roberts adopted the historical role of acting as a largely passive player, deferring to the Senate and, guided by the parliamentarian, only occasionally chiming in to remind senators of the rules and procedures of the trial.

Leahy has vowed to be an impartial judge during the trial, but also will cast a vote as a trial juror — likely for conviction. Some Senate Republicans have already pointed to this unusual dynamic to suggest the trial is a rigged, partisan affair and it may be another pretense to reject the case against Trump out of hand.

One interesting quirk: Vice President Kamala Harris, the president of the Senate, has the authority to break any ties on procedural matters — such as whether to call witnesses. But there’s little expectation she’ll wade into this thicket, especially given the optics of weighing in on the disqualification from office of a potential future political opponent.

We now know that the House managers and Trump legal team will have 16 hours apiece — beginning on Wednesday — to make their most compelling case to the Senate. For Democrats, that means putting on a production heavy on the increasingly rich body of video evidence showing that the Jan. 6 insurrectionists took their cues from Trump, cited him as the reason they stormed the Capitol and viewed his remarks to them on that day as permission to confront lawmakers.

An underappreciated fact about the trial: The collection of evidence continues to build daily, with new court filings, social media snippets and videos taken by the rioters themselves surfacing in real time. Democrats plan to knit these together with Trump’s actual call on Jan. 6 for his supporters to “fight like hell” and march on the Capitol. Several of the subsequent participants in the insurrection told judges on Monday that they viewed Trump’s words as authorization, and one even called him an “unindicted co-conspirator” in the subsequent violence.

Democrats used video to powerful effect in Trump’s first impeachment trial — mounting a case that relied on Trump’s own words and actions. This time, they’ll have hundreds of hours of footage to cull to demonstrate the effect of Trump’s words. Trump’s team, which was caught flat-footed last year by the House’s reliance on technology, has signaled its own plans to deploy videos, potentially from violent riots that plagued some American cities over the summer and of remarks from Democrats that they’ve described as inviting violence.

Trump’s attorneys appear poised to exploit the House’s decision not to mount an impeachment investigation as they present their own defense of Trump. In addition to their primary argument that the trial is unconstitutional — and that even a conviction could be ignored or challenged in court — they’re filling in blanks about the events of Jan. 6 in the light most favorable to Trump.

For example, Trump’s team argued in its trial brief Monday that Trump was “horrified” by the violence at the Capitol and did not sit on his hands or delay sending aid. Rather, they said, his White House grappled with a complex set of procedures to mobilize assistance. That assertion contradicts multiple media reports that Trump was uninterested in quelling the violence and was more concerned with chastising Vice President Mike Pence — even as he fled violent insurrectionists — than coordinating a security response.

Democrats are going into the trial without testimony on these matters from anyone in Trump’s orbit or from confidants and allies who might dispute the Trump team’s characterization of events.

But it was an unanticipated bombshell that nearly upended Trump’s first impeachment trial: the leak of John Bolton’s book manuscript, which revealed the former national security adviser’s conversations with the president about Ukraine. And in this fluid investigation of the Capitol insurrection, the potential for surprises remains high.

After each team presents opening arguments, senators will have four hours to grill them and resolve any remaining questions about their cases. In last year’s trial, senators on the fence about whether to prolong the proceedings or acquit Trump provided clues to their position during the Q&A round. This time, if House managers are succeeding in persuading any GOP senators beyond the handful already considered open to conviction, it may be obvious by this phase of the trial.

One wrinkle: The four hours of questioning is just one-quarter of the amount of time allotted for similar questions during Trump’s 2020 trial on charges that he abused his power and obstructed congressional investigations.

The House impeachment managers have indicated that if they mounted a full-scale effort to secure witness testimony — from insurrectionists, Capitol Police officers, witnesses to the Jan. 6 violence and Trump’s White House aides — they might be able to secure even more damning testimony than they have on the record.

But there’s little appetite to prolong the Senate trial beyond the currently allotted week of proceedings. Democrats are convinced that Republicans who have made up their mind to acquit wouldn’t be moved even by smoking-gun type testimony. And the Biden White House has made clear its position that extending a trial for weeks or months would damage his agenda.

There’s no sign as of now that any minds are likely to be changed by this week’s proceedings. The question is: If the Democrats sense a shifting playing field — from an implosion by the Trump defense to newly emerging evidence that puts more GOP senators into the “persuadable” column — will they change course?

Though most trial business is required to occur before the arguments begin, the proposed trial rules explicitly defer a decision on witnesses until after the Senate’s Q&A period. At that point, the House managers and Trump team have two hours to argue the matter and decide whether to subpoena any witnesses or documents.

If both teams agree they have no interest in witnesses, it could be a short discussion. But the deferred decision gives each team a chance to regroup and assess its strategy late in the trial.

In 2020, the Senate narrowly rejected Democrats’ bid to subpoena Bolton, though two Republicans — Susan Collins and Mitt Romney — joined them. This time, Democratic leaders have said Trump’s alleged crimes were so overt that witnesses wouldn’t be necessary. But they’re facing cross-currents of pressure from progressives who want to see the case against Trump fully aired — and are worried that it’s a bad look to appear to cut corners in a trial about a deadly insurrection.