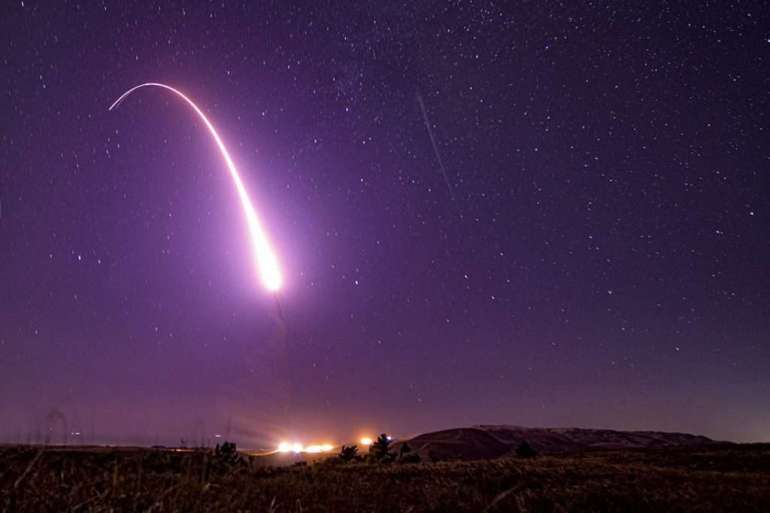 The fate of the Ground-Based Strategic Deterrent contract, which was awarded to Northrop Grumman last year — along with new and refurbished warheads that will go with it — will prove to be an early test of whether the newly empowered progressive wing of the Democratic Party can make significant inroads toward shrinking the nuclear weapons budget.

“It is the most contentious part of the modernization program and one most likely to take the most heat in the first phase of the attack,” said Franklin Miller, who oversaw the arms control portfolio on the National Security Council for President George W. Bush and advised the Trump administration on nuclear issues. “It will be the one that will probably be pressed hardest by the progressives because it’s got a big dollar target associated with it.”

The military’s nuclear commanders and conservative national security scholars are making a collective effort to educate policymakers and the public, while hawkish members of Congress are grilling Pentagon nominees on their plans for the program. Military officials are briefing the press and members of Congress on the need for the program and their plans to begin preparations this summer for testing the new missile, as well as publishing dire warnings about Russia and China’s aggressive nuclear ambitions.

So far, Biden’s top Pentagon nominees have publicly backed all three legs of the nuclear triad — the land-based missiles as well as nuclear-armed submarines and bombers — but they have stopped short of endorsing specific programs while they prepare to craft their first defense budget request.

Several senators pressed Deputy Defense Secretary Kathleen Hicks at her confirmation hearing on her views, including Sen. Tom Cotton (R-Ark.), who specifically tried to get her to commit to the GBSD program as it is currently planned and funded.

But the Air Force says it is confident its arguments will prevail after the Biden administration reviews the nuclear modernization plan, which also includes plans to build a new fleet of ballistic missile submarines, a next-generation bomber that can carry nuclear weapons, and a suite of new air- and sea-launched missiles to replace other outdated systems.

“I think when those organizations, in particular you mentioned the new administration, look at all the homework that’s been done behind GBSD, they’re going to see the equation the same way,” Maj. Gen. Michael Lutton, commander of the 20th Air Force, said in an interview. His organization is responsible for operating and maintaining the Minuteman III missiles located in underground silos at bases in North Dakota, Montana and Wyoming.

The Air Force awarded Northrop Grumman an inital $13.3 billion contract for the GBSD program in September. It will give the ICBM force “increased accuracy, enhanced security and improved reliability” and offer a “broader array of strategic nuclear options to address the threats of today and the future,” the service said. The missile would begin to be deployed in the later part of this decade, the announcement said.

Lutton stressed that the public should understand that the program is not designed to expand the nuclear arsenal, only to replace weapons that are getting increasingly difficult to maintain.

“This effort is about modernization,” he said. “Not about more. That’s lost in a lot of the discussion. We’re looking at how we modernize our force, not how we get more ICBMs. That modernization is the way to go. We can’t life-extend this weapon system any longer.”

It’s a major refrain from the nuclear brass, which maintains that pausing the program or reversing course would effectively begin phasing out the land-based leg.

“Let me be very clear, you cannot life-extend Minuteman III,” Adm. Charles Richard, head of U.S. Strategic Command, which oversees all three legs of the nuclear triad, recently told reporters as he cited the difficulty of finding replacement parts. “That thing is so old that in some cases the drawings don’t exist anymore.“

He also took a swipe at critics outside of government who suggest they know better about the challenges facing the Air Force to ensure the aging weapons system is reliable. Or as he called them, “someone in a think tank who actually doesn’t have their hands on the missile.”

But these arguments are also increasingly coming under scrutiny from those who question the assumption that the U.S. will need 400 ICBMs on alert for decades to come.

“It is possible to further extend the life of the Minuteman III and doing so would save a significant amount of money,” said Kingston Reif, director of disarmament and threat reduction at the Arms Control Association, which is calling for a halt in the contract as a first step. He was citing a 2017 analysis by the nonpartisan Congressional Budget Office that estimated that $20 billion could be saved by delaying the new missile program for 20 years and in the meantime continuing to refurbish the current missiles.

Moreover, the Biden administration has stated its desire to negotiate new arms control limits after extending the New Strategic Arms Reduction Treaty with Russia for five years this month. And both sides pledged to begin negotiations about reductions.

“If it turns out that ICBMs are further reduced as part of that [future] agreement, you don’t need to replace as many, or you may not even need to replace them,” said Sharon Weiner, who was a program examiner for the White House Office of Management and Budget from 2014 to 2017 and responsible for the nuclear weapons budget. “You can cannibalize them for longer.”

Weiner, who now teaches at American University, believes the savings could be greater, depending on what the next few years hold on the arms control front. She notes, for example, that those estimates “presume that then you would buy GBSD in the same numbers that you were planning to buy.”

“I think we need a big debate, now that we are in the majority, about the $100 billion acquisition cost of a new intercontinental ballistic missile, the Ground-Based Strategic Deterrent,” said Sen. Ed Markey (D-Mass.), a leading advocate for reducing the nuclear weapons budget. “The Air Force knows they can extend the lifespan of the existing Minuteman IIIs.”

“It is something I plan on raising so we are debating these issues,” he added in an interview. “That’s something we can do this year, begin to scale back the amount of unnecessary investment in the making in the new ICBM.”

Progressive lawmakers and other leading advocates for scaling back the ICBM program are also armed with the influential voice of former Defense Secretary William Perry, who has called for phasing out the land-based leg of the triad. He argues that the missiles are too vulnerable to an accidental launch and that nuclear-armed submarines and bombers are sufficient to deter Russia, China and other potential adversaries.

“We will be continuing to push the administration on this and there’s a good chance, I think, of success, in pushing them to where it will get discussed, whereas with the previous administration there wasn’t any point to pushing,” Perry said in an interview.

A spokesperson for Northrop Grumman pointed to recent remarks by CEO Kathy Warden on the value of the program. “We see this part of the triad as the most resilient … and one of the most important of the three legs,” she told the Center for Strategic and International Studies on Tuesday.

In November, Warden also cited support for the GBSD from the Obama and Trump administrations following reviews of nuclear programs. “Both of those concluded that the path that we’re on for modernization of the ICBMs with the current GBSD program is the right path,” she said. “And I fully expect that to be the conclusion if another review was conducted.”

Proponents of curtailing the program are also pointing to new polling data indicating the public is lukewarm on spending so much over the coming decades on a new missile, in addition to the warheads and support facilities that will be required.

But the obstacles to changing course may be insurmountable. Republicans in the Senate, who would have to ratify any new arms control treaties — which require a two-thirds majority — are certain to continue to demand a robust nuclear modernization program in return for their support.

“I would fully expect Senate Republicans to continue to make that argument now that the Biden administration has agreed to a five-year extension of New START,” said Rebeccah Heinrichs, a specialist on arms control and nonproliferation at the hawkish Hudson Institute. “We must continue on our investments and that 100 percent includes getting GBSD online.”

That was the “grand bargain” President Barack Obama struck when he got Senate approval for New START in 2010.

“Therein lies the frustration of the progressives and that is behind the renewed vigor with which they’re pushing their agenda,” Miller said. They feel “we got screwed by Obama. This is our real chance to make a difference.”

Then there are the powerful political interests in both parties, in the defense industry and in the states where the ICBM force is a major source of economic activity.

“It is a huge issue,” said Peter Zwack, a retired Army brigadier general who served as defense attache at the U.S. Embassy in Moscow from 2012 to 2014. “There are a lot of agendas and lobbies tied to this. It is big money. Gotta keep the production facilities going,” as the argument goes, “gotta keep the research labs going. There is momentum.”

But even simply having a serious public debate about the need for such a large-scale investment is an end in itself, added Zwack, who is now a scholar at the Wilson Center.

He predicted that in the not-too-distant future there will likely be “a different mix” of weapons in the U.S. and Russian nuclear arsenals. “I am for modernization but I’m wary that we are about to go into a massive, expensive upgrade,” he said. “I think we both have massively more than enough. Whether it’s 100 or 1,000 ICBMs, it means the end of the world.”

CORRECTION: An earlier version of this report misstated the number of states that host underground nuclear missile silos. The number is five.