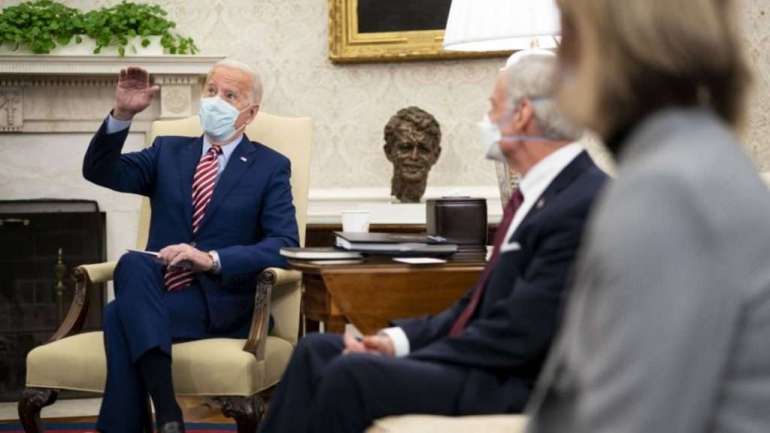 Calling it a “process and ongoing discussion,” she said the meeting was a reflection of the importance of the issue to Biden.

“But I don’t have a number for you, we’re not at that stage in the process yet.”

Present at the meeting were Senate Environment and Public Works Chair Tom Carper (D-Del.) and ranking member Shelley Moore Capito (R-W.Va.), along with Sens. Ben Cardin (D-Md.) and Jim Inhofe (R-Okla.), who are expected to be the chair and ranking member on the subcommittee that oversees transportation. Vice President Kamala Harris and Transportation Secretary Pete Buttigieg also attended — Buttigieg remotely, since he is quarantining after a possible coronavirus exposure.

In an interview after the meeting, Cardin made it clear that revenues remain a sticking point and said that the EPW Committee will need help from the taxwriters on the Finance Committee to figure out funding.

“I raised the issue that would be good if we could do some of this during the Covid relief package to get us started, recognizing that it’s going to be a challenge to make sure that we have adequate revenues to fund transportation moving forward,” he said in an interview after the meeting broke.

Cardin, who said Carper shared a proposed schedule for moving a legislative package forward at the meeting, stressed that there is not yet consensus on how any package will move. He acknowledged that it could be broken into several smaller packages, saying “we need to make sure that we can get bipartisan support“ and that “sometimes by making things in smaller packages you have a better chance, as we’ve done with transportation and water on EPW.”

With Democrats now in the majority, Carper has said he plans to make significant changes to the surface transportation bill, S. 2302 (116), that the EPW Committee approved unanimously in July 2019.

“Our staffs are going to exchange information,” Cardin said. “The president said he was going to take a look at what we did last year, he may have some suggestions, would we consider those suggestions, and we said, ‘absolutely.‘”

At the Oval Office meeting, Biden said that the EPW committee “is central to everything that’s going to happen” on infrastructure and asserted that infrastructure should be nonpartisan.

“I’ve been around long enough … that infrastructure wasn’t a Republican or a Democratic issue,” he said.

Biden cited “a number of things out there that the American people are looking for us to step up” including “a lot of bridges in West Virginia” and “a lot of dangerous spots on Route 9 in terms of Cancer Alley“ in Louisiana.

“There’s a lot we have to do,” Biden said, according to a pool report.

“We don’t get moving, they’re going to eat our lunch,” he said.