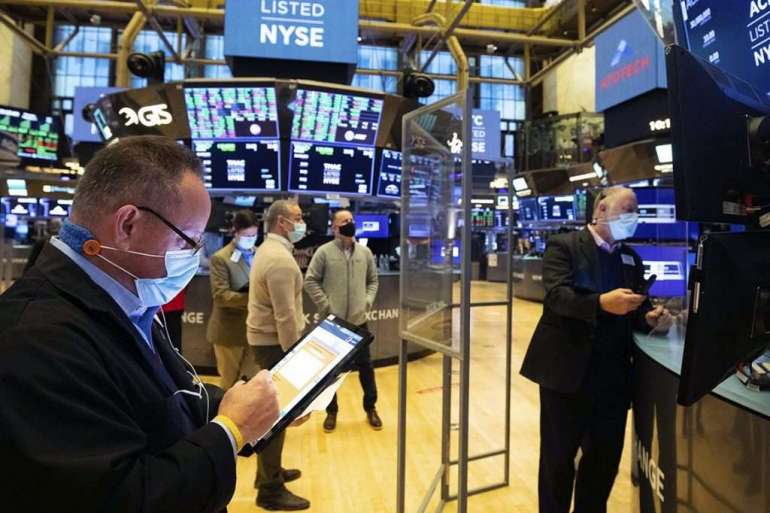 But if the dream scenario does arrive, another risk is lurking: A burst of new spending and economic growth coupled with the massive amount of fiscal stimulus in the system — possibly including nearly $2 trillion more under the White House’s latest plan — could lead to a sharp spike in inflation. That would send stocks tumbling and could force the U.S. Federal Reserve to contemplate raising interest rates to cool the economy.

The Goldilocks scenario Wall Street and the White House are hoping for includes a successful vaccination effort and enough federal support to keep millions of suffering Americans afloat until then, followed by an economy that runs neither too hot nor too cold. But there is no guarantee Goldilocks will arrive.

“The Biden plan coming on top of last year’s stimulus, the budding increase in union power, the rising risk of import inflation coupled with a ballooning trade deficit, and other data suggest to me that inflation will jump,” said Richard Bernstein of financial firm RBAdvisors.

And it could be that all the easy money from the Fed has created dangerous bubbles that could pop, Bernstein warned.

“The Fed is providing tons of liquidity, but because banks have been hesitant to lend, the liquidity is trapped in the financial economy and bubbles are forming. Whether it’s Bitcoin, SPACs, Robinhood day traders, or anything similar, it’s clearly not healthy capital formation.”

For stocks, it is the best of times, with the Dow Jones Industrial Average hitting yet another record on Wednesday as corporate profits come in fairly strong, big new stimulus remains likely and hopes remain for a strong economy in the second half of the year as the Covid-19 pandemic potentially fades.

But the bond market is clearly growing worried that all of the stimulus and massive deficit spending could eventually bite the economy in the form of faster inflation. The yield on the 30-year Treasury bond climbed above 2 percent on Monday for the first time since the pandemic began. And the yield on the benchmark 10-year bond hit its highest point since the pandemic began.

Interest rates, pushed down by the Fed, remain historically low. But should they begin to rise more quickly, they could eventually crimp consumers’ ability to borrow and dent what are now red-hot housing markets in many parts of the country.

Inflation as measured by a basket of consumer products monitored by the federal government rose 0.3 percent in January, matching consensus expectations, easing some fears for rapidly rising prices. Still, it was the quickest pace in five months, driven by a 7 percent increase in gas prices.

And other measures of inflation look more aggressive. Action in the market for 10-year Treasury Inflation-Protected Securities, known as TIPS, suggests investors expect inflation to average around 2 percent for the next decade, right around the Fed’s target.

The potential for a rapid increase in consumer demand brought on by an end to the pandemic — coupled with a big drop in supply after the downturn crushed many businesses — also has some policymakers worried about a rapid increase in prices that could push inflation past the Fed’s current comfort zone of 2 to 2.5 percent annually.

“This recovery will be different. Slumps brought on by pandemics tend to end faster than those brought on by financial crises. So this recovery should be faster than the last,” former New York Fed President Bill Dudley wrote in a recent op-ed. “All this suggests that the Fed, despite its desire to be accommodative and boost employment, might have to pull back on stimulus sooner and with greater force than anticipated to keep inflation in check.”

That kind of sharp increase in rates could produce the kind of “market accident” many investors fear could topple stock prices.

Inflation readings will also likely spike a bit higher later this year when the early months of the pandemic, which caused a drop in prices, are no longer part of annual comparisons.

A debate about whether policymakers should worry about inflation has created something of a rift in the Democratic Party during the stimulus debate. Former Treasury Secretary Larry Summers warned in a recent op-ed that the $2 trillion stimulus package the White House is currently trying to get through Congress could be too large and lead to damaging inflation while limiting the administration’s ability to fund other priorities like clean energy.

“[W]hereas the Obama stimulus was about half as large as the output shortfall, the proposed Biden stimulus is three times as large as the projected shortfall,” Summers wrote, referring to the gap between the economy’s potential versus where it is in the wake of the virus. “There is a chance that macroeconomic stimulus on a scale closer to World War II levels than normal recession levels will set off inflationary pressures of a kind we have not seen in a generation, with consequences for the value of the dollar and financial stability.”

The op-ed set off a fierce debate with progressive Democrats ripping Summers, and Biden administration supporters like Gene Sperling, a Summers colleague in the Clinton and Obama White Houses, firing back with their own op-eds arguing the risk of doing too little on stimulus is far greater than doing too much.

For the moment, Fed Chair Jerome Powell appears to be very much on the side of those who say it is too soon to worry very much about inflation risks and that the economic pain wrought by the pandemic continues to require an aggressive response. He declined to weigh in on any exact size for the next stimulus package.

In a virtual speech to the Economic Club of New York, Powell on Wednesday said published unemployment rates during the pandemic “have dramatically understated the deterioration in the labor market.” He added that the pandemic “has led to the largest 12-month decline in labor force participation since at least 1948” while hitting poorer Americans far harder than the wealthy who have mostly kept their jobs and enjoyed large stock market gains.

Sperling dismisses the idea of a dangerous inflation spike ahead. “On monetary policy, most are now taking the position ‘don’t move on inflation until you see the whites of its eyes,’” he said. “Why on fiscal policy — when we are still 10 million jobs down with likely real unemployment at around 10 percent — would we pull back when accelerating inflation is nowhere in sight? The risks of the continuing economic or new Covid challenges leading to significant long-term unemployment and harming the most vulnerable workers seems so much greater than the risks of a surge of inflation.”

Many Wall Street analysts — while nodding to the risks of faster inflation and the economy-slowing steps that could be needed to fight it — concur that risks are weighted to the other side. They largely say the bigger concern is that vaccine stumbles and new Covid strains could continue to restrain the economy and inflict widespread economic pain, making very bold fiscal and monetary responses still essential.

“For the Fed, the risk of tightening policy prematurely is much greater than the cost of tightening too late,” said Eric Winograd, senior economist for fixed income at investment firm AllianceBernstein. “The same is true on the fiscal side. If you do too little, we risk a very weak economy. You do too much, we get an overheated economy. Oh well. We have the tools to deal with that.”