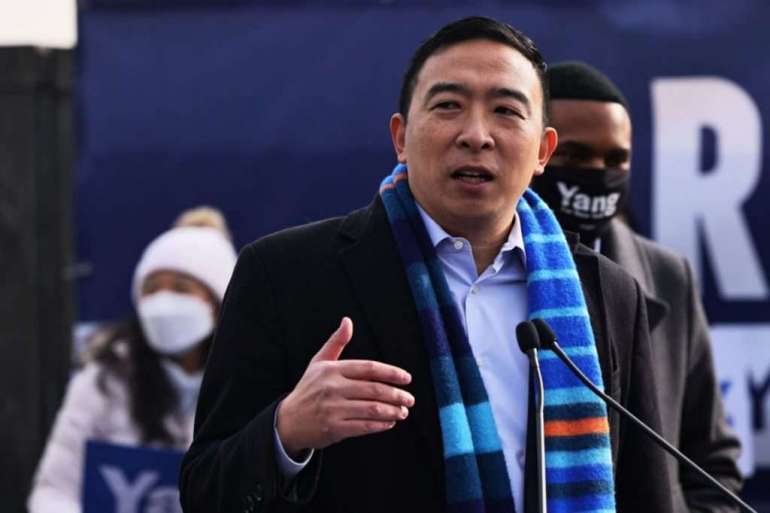 Another public poll released Wednesday confirmed his frontrunner status, even before he airs any advertisements. With 28 percent of voters saying they would back him, Yang is well ahead of his nearest rivals, Brooklyn Borough President Eric Adams at 17 percent and City Comptroller Scott Stringer at 13 percent. And his name recognition — 84 percent among Democratic voters polled — puts him nearly 20 points higher than his nearest competitor.

The former presidential candidate has pursued a campaign strategy of being ubiquitous in the city, sucking up the oxygen in the race and assuming any attention is better than none at all.

And he’s so far been able to shake off a series of self-inflicted errors, attacks from opponents and news articles about a toxic environment in his presidential campaign.

“We are out there all the time,” said co-campaign manager Chris Coffey. “Andrew is authentic and he is not a career politician. And that means that he is not always going to be on script.”

As Yang prepared to kick off his campaign, POLITICO revealed that he left the city at the height of the coronavirus pandemic, spending much of his time at a second home in New Paltz. He then drew a torrent of criticism after explaining his move to The New York Times by saying: “Can you imagine trying to have two kids on virtual school in a two-bedroom apartment, and then trying to do work yourself?”

His escape to New Paltz, on top of City & State’s reporting that he has not voted in many mayoral elections, left his rivals accusing Yang of lacking New York City bona fides.

He then proposed a casino on Governors Island, an idea roundly panned by other politicians as ill-advised and illegal. Online critics were equally passionate about contesting his definition of a bodega, the small convenience stores that dot thousands of New York blocks.

The mayoral candidate withstood criticism from Rep. Alexandria Ocasio-Cortez, who accused him of ripping off her “Green New Deal” proposal for public housing, and state Sen. Julia Salazar, who said he was using people as props by campaigning along a food bank line. Coffey said Yang and Ocasio-Cortez have since had several positive exchanges.

Some of his baggage is heavier.

Former staffers told Business Insider they experienced sexism in his presidential campaign, while the Daily News reported that his mayoral campaign was requiring volunteers to sign nondisclosure agreements.

But with few New Yorkers closely watching the mayor’s race at this early stage, those controversies may not have registered with likely voters, political operatives say. To the extent they have, they may have served to further increase his profile.

“Five hundred people who are obsessively watching every move are really not representative of the electorate,” said Democratic consultant Neal Kwatra, who’s worked extensively in New York politics. “Most voters in southeast Queens and Central Brooklyn who are likely to decide this election probably didn’t pay attention to these perceived gaffes.”

“There’s a big difference between what animates Twitter and what New Yorkers actually care about,” said Smith, who is not affiliated with any candidate in this race. “The race is going to be decided on Covid, economic and public safety issues — not debates over what qualifies as a bodega.”

Coffey said the hits against Yang aren’t making a dent with voters.