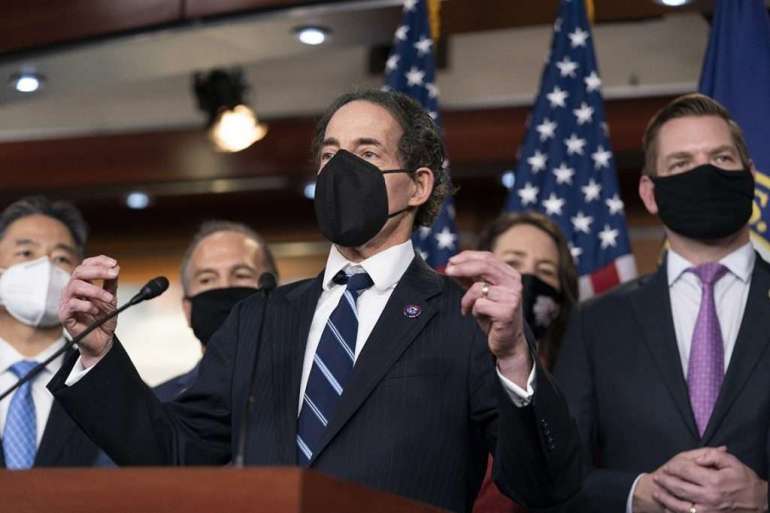 The comments came after a tumultuous final day in the Senate trial, where Democrats on Saturday voted to have witnesses speak at the trial — then backtracked. Seven Republicans ended up voting with the Democrats to convict Trump, two more than during the Tuesday vote on the constitutionality of trying a former president.

Democratic senators and House impeachment managers defended the flip-flop on Sunday, maintaining that drawing out the Senate trial with witnesses would not have been necessary for proving their point.

“We didn’t need more witnesses,” Rep. Madeleine Dean (D-Pa.), one of the House managers, told ABC’s George Stephanopoulos on “This Week.” “America witnessed this. We were in a roomful of witnesses and victims.”

Sen. Amy Klobuchar (D-Minn.) told Wallace on “Fox News Sunday”: “When you look at what people said after the trial, it wasn’t more witnesses that were going to change their mind.”

She added that Senate Minority Leader Mitch McConnell did not vote to convict even though he acknowledged in scathing remarks on Saturday that Trump was “practically and morally responsible” for provoking the events of Jan. 6. McConnell disagreed with the constitutionality of trying a former president.

“We could have had 1,000 witnesses, but that could not have overcome the kinds of silly arguments that people like McConnell and Capito were hanging their hats on,” Rep. Jamie Raskin (D-Md.), the lead impeachment manager, told NBC’s Chuck Todd on “Meet the Press,” referring to Sen. Shelley Moore Capito of West Virginia.

Graham, one of Trump’s fiercest allies in the Senate, wasn’t the only lawmaker who wanted the Jan. 6 riots investigated. Others, including Sen. Chris Coons (D-Del.), a protégé of President Joe Biden, and Dean, agreed that there should be a 9/11-style investigation into the insurrection.

Sen. Bill Cassidy of Louisiana, one of the few Republicans to vote to convict Trump, told Stephanopoulos that there “should be a complete investigation about what happened on 1/6, both why wasn’t there more law enforcement, National Guard already mobilized, what was known, who knew it, all that, because that builds the basis so this never happens again in future.” But Cassidy

added that he wanted to look forward and not have Jan. 6 define the future of the Republican Party.

Coons defended the move not to have witnesses at the impeachment trial by bringing up further possible investigations against Trump outside of the formal impeachment. He said that an investigation into Jan. 6 could justifiably stretch for months, but added that the Senate had to focus on pressing legislative priorities.

“I’m also focused on moving forward with delivering the urgent pandemic relief, the revitalization and strengthening our economy that President Biden has been focused on since becoming president, even during this week of the impeachment trial,” Coons said on ABC.

Sen. Dick Durbin of Illinois, the No. 2 Democrat in the Senate, said he was happy the impeachment trial provided an accounting of the Jan. 6 events.

“I wanted to make sure that the Soviet-style revisionists on the Republican side who are trying to blame everybody but Donald Trump had a record in front of the American people that was clear,” Durbin said on “Meet the Press.” “I think Jamie Raskin and the House managers made that record with clarity.”

Graham demanded an investigation into what leadership both in the House and Senate knew in advance of the riots, insisting there was a “pre-planned element to the attack.” But he stood by Trump, refusing to assign sole responsibility to the former president. He dismissed Democrats’ claims that Trump’s bellicose language on Jan. 6 led to the Capitol riots, repeating the former president’s defense that language about fighting is common in political parlance.

Though Senators agreed on the future shadow cast by the insurrection, less clear was the political future of Trump himself. Graham disagreed with McConnell’s Saturday statement, calling the minority leader an “outlier” in his party. But Coons contended that had the conviction vote been conducted secretly, the chamber would have obtained the 67 votes necessary to convict.

Graham also said that Trump remained a major force in the Republican Party and that he had his eyes set on the 2022 midterm elections. Graham said that in a party in which support for Trump remains high, McConnell’s damning statements about Trump would put the minority leader “center stage” as Republicans vie to take back control of the Senate. Graham added that he plans to meet with Trump next week, calling him “the most vibrant member of the Republican Party.”

“The Trump movement is alive and well,” Graham said.

But a number of his Republican peers have voiced skepticism on that front. Former Gov. Nikki Haley of South Carolina told POLITICO Magazine that Trump “let us down” and “went down a path he shouldn’t have, and we shouldn’t have followed him.” And McConnell has been trying to push the party away from Trump ever since Jan. 6.

Cassidy told Stephanopoulos on Sunday that he felt Trump’s “force wanes” and “the Republican Party is more than just one person.”

“The Republican Party is about ideas,” Cassidy said. “The American people want those ideas, but they want a leader who’s accountable and a leader they can trust. I think our leadership will be different going forward.”

Gov. Larry Hogan of Maryland also said he expected the GOP to move forward once members overcame their fear of Trump.

“A lot of Republicans are outraged, but they don’t have the courage to stand up and vote that way because they’re afraid of being primaried, or they’re going to lose their careers,” he said on CNN’s “State of the Union.”

Klobuchar suggested Trump’s future legal woes would seriously loosen his hold on the GOP. The former president is under investigation in Georgia for his attempt to flip the 2020 election results in that state, and in New York over allegations of financial misdeeds related to the Trump Organization.

“The American people have now seen clear out what he did. He violated his oath of office in what [Rep.] Liz Cheney called the greatest portrayal of a president’s oath of office in history, and those memories and those police officers’ screams will be forever etched in the memories of Americans,” Klobuchar said. “He is done.”