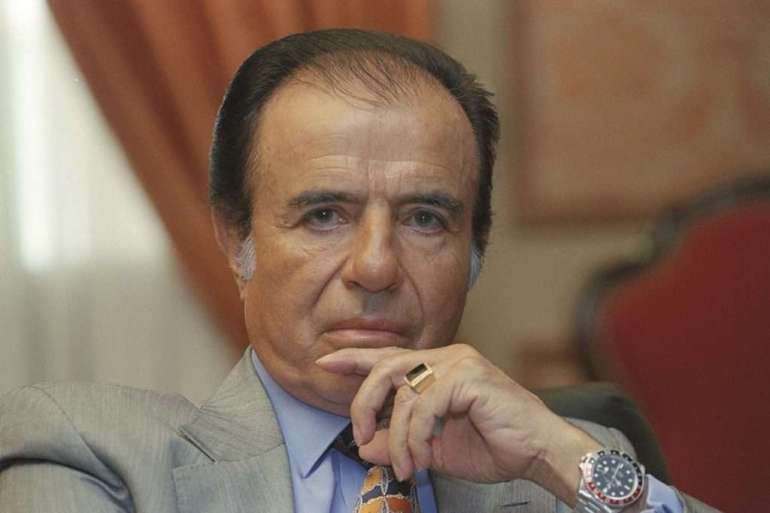 Menem was also supremely flexible as a politician, beginning his career as a self-styled disciple of Gen. Juan Domingo Peron, who founded the populist movement that bears his name and placed the economy largely under state control. Menem, who served two terms as president between 1989 and 1999, transformed the country — but in the opposite direction.

“I don’t know if I’m going to get the country out of its economic problems, but I’m sure going to make a more fun country,” Menem once said. He relished the company of celebrities, hosting the Rolling Stones and Madonna in Buenos Aires, and memorably shrugged off criticism after receiving a red Ferrari as a gift from an Italian businessman in 1990.

“It is mine, mine and mine,” Menem, an auto racing fan, said in front of television cameras. “Why would I donate it?”

Later, he reluctantly agreed to auction off the car for $135,000, with the proceeds going to state coffers.

The son of Syrian immigrants whose family owned a winery, Menem was a folksy, three-time governor of northwestern La Rioja Province, noted for shoulder-length hair and muttonchop sideburns when he came to international prominence.

He won the Peronist Party nomination and surged to victory in 1989 presidential elections, capitalizing on economic and social chaos in Argentina. The country was mired in 5,000% annual inflation and the poor were sacking supermarkets to obtain food.

Under Menem, the economy registered strong growth, inflation dropped to single digits and the peso, the national currency, enjoyed unprecedented stability as it was pegged to the U.S. dollar. The long hair and sideburns were gone and the flashy clothes replaced by imported, hand-made suits.

The core of Menem’s recovery plan, masterminded by energetic Harvard-educated Economy Minister Domingo Cavallo, was the withdrawal of the state from the economy.

Menem removed controls on prices and interest rates. He sold the state-owned phone company, airlines, race tracks, steel mills and the oil giant YPF, then South America’s largest company. He cut the state payroll and encouraged foreign investment. He curbed once-powerful labor unions that formed the backbone of the Peronist movement and were angered by state payroll cuts that eliminated jobs.

In foreign affairs, Menem withdrew Argentina from the Non-Aligned Movement, a Cold War-era structure that had espoused independence from the United States and — less so — the Soviet Union, and forged strong ties with Washington.

Argentine troops participated in the 1991 Gulf War against Iraq and joined U.N. peacekeepers in Haiti and the former Yugoslavia.

During Menem’s tenure, Argentina was the scene of deadly bombings — against the Israeli embassy in Buenos Aires in 1992 and a Jewish center in 1994. Argentina accused Iran of involvement; Iran denied it. Menem was later tried for the alleged cover-up of those responsible for the attack on the Jewish center, but was found not guilty in a trial in 2019.

As president, Menem prevailed in disputes with the Argentine military, whose 1976 coup had led to the extrajudicial killings and disappearances of tens of thousands of people. He trimmed armed forces spending and abolished the highly unpopular military conscription system.

He dismayed human rights groups by granting a pardon to former military junta members serving sentences of up to life in prison for crimes connected to the disappearance of Argentine dissidents during the 1976-1983 dictatorship. The pardon was extended to former guerrillas in what Menem described as a process of national reconciliation.