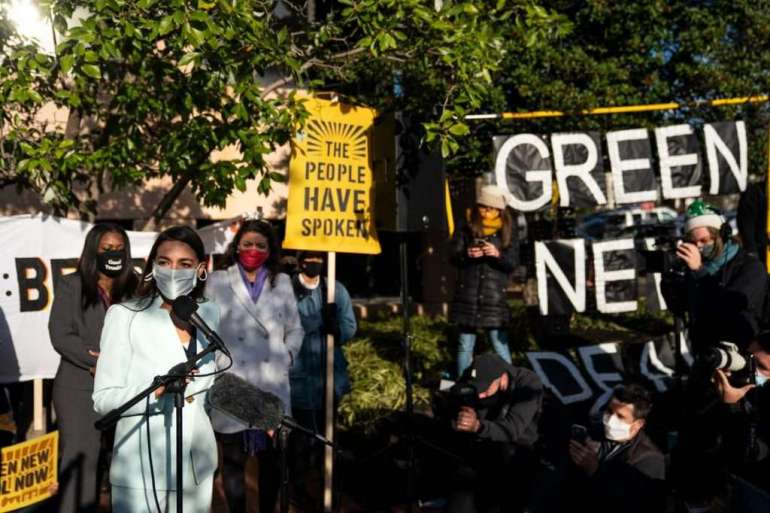 “We are all trying to assess the current state of climate politics and what is possible this year,” said Alex Flint, executive director of the Alliance for Market Solutions, a group of conservative leaders who support a revenue-neutral carbon tax.

President Joe Biden has thrown down his marker. His campaign platform included an “enforcement mechanism” for reducing emissions, which many interpreted as a carbon tax. Treasury Secretary Janet Yellen has endorsed a tax. White House climate envoy John Kerry and domestic climate chief Gina McCarthy both say a tax is on the table.

In a nod to political sensitivities, Biden officials also endorse a more generic carbon “price,” a term which covers an array of options such as cap and trade, and could be included alongside a clean electricity standard that sets requirements for renewable energy.

The president will want to make a splashy commitment on the international stage, possibly at his April 22 summit of world climate leaders. And the EU and U.K. are advancing carbon tariffs linked to pricing schemes, raising urgent questions of how the U.S. will align with those systems.

But on Capitol Hill, where climate negotiations are just getting underway, Democrats worry that the White House will prematurely issue its own specific proposals and upset fragile legislative consensus-building.

“I just don’t think he will be as successful if he tries to cook up a climate bill in the opening months of his administration and then present it to Congress. I think it becomes a target at that point,” Sen. Sheldon Whitehouse (D-R.I.), a carbon price supporter, said in an interview. “If at some point it looks like we’re going to fail, then they can always step in.”

There are tripwires on both sides of the aisle.

Senate Budget Committee Chair Sen. Bernie Sanders’ (I-Vt.) shifting stance on carbon pricing could foreshadow the type of problems Democrats will have in writing a plan that wins the support of progressives. Sanders had campaigned for president in 2016 on a carbon tax, but those proposals were notably absent during his 2020 run after it fell out of favor with the left.

But Sanders never wholly ditched the idea — his campaign website still calls for “fees” on fossil fuel pollution — and it remains a potential policy tool. Green New Deal co-author Rep. Alexandria Ocasio-Cortez (D-N.Y.) has said a tax can be part of climate legislation.

Whitehouse said some Republicans have told him they could support carbon pricing, but would need strong public backing from corporate leaders before breaking from party orthodoxy to endorse a new tax.

Trade groups that have long been aligned with Republicans, including the U.S. Chamber of Commerce, American Petroleum Institute and Business Roundtable, have endorsed a loosely defined “market-based” mechanism for dealing with emissions.

While carbon tax supporters have talked about a “jailbreak moment” with Republicans, they’ve had little tangible success, said Mike Palicz, federal affairs manager with Americans for Tax Reform, a small-government group that’s influential in GOP circles. During a marathon round of votes on the coronavirus relief bill earlier this month, all 50 Republican senators voted for a resolution opposing a carbon tax.

Palicz said there’s political risk in pushing policies that would raise energy costs, especially during an economic slowdown. Imposing a tax that would touch nearly every American would be out of step with Biden’s attempt to present himself as an ally to working-class families, he said.

“During the election, this is something Biden tried his best to run away from,” Palicz said. “Since day one [in office], he has clearly taken steps that are not aligned with that.”

And Democrats as a whole don’t see eye-to-eye with the business groups and think tanks that are nudging tax-curious Republicans to embrace carbon pricing. Any carbon tax bill is likely to be packed with spending — such as money for electric vehicles and to help pollution-stricken communities — that progressives will demand in exchange for their support.

“We’ve made it clear to all of our colleagues that in order to have [a carbon price], it can’t be the only thing,” said a Democratic aide with the Senate Budget Committee. “In the past, the folks who may have been advocating for a price on carbon have made me feel that is the end-all, be-all, and I’m no longer hearing a carbon tax is an end-all, be-all.”

Progressives’ wariness of a carbon tax stems from fears that not only is it too modest a move to reduce emissions, but that it fails to address pollution that disproportionately affects low-income and communities of color.

Those environmental justice concerns have gained traction nationally in recent years, and Biden has put them at the center of his climate and environment platform.

“You have to evaluate [a carbon fee] as to the impact and the history that it’s had with [environmental justice] communities. And it’s not always been good, to say the least,” House Natural Resources Chair Raúl Grijalva (D-Ariz.) said in an interview.

A carbon tax bill sweetened with goodies to attract the reluctant left could come at the expense of Republicans who are more likely to be swayed by the economic argument that a simple fee is more efficient and provides more certainty to industry.

“I don’t think anyone could tell you what the outcome looks like if that’s the path that they go down,” said Joseph Majkut, director of climate policy with the Niskanen Center, which supports a carbon tax.

Winning at least a few Republican votes could be key. Manchin, chair of the Senate Energy and Natural Resources Committee, on Feb. 4 said he was, “right now, no,” on a carbon tax. Sen. Kyrsten Sinema (D-Ariz.), as a member of the House in 2018, was one of seven Democrats who voted in favor of a resolution declaring carbon taxing “detrimental” to the economy.

Neither Manchin nor Sinema have weighed in on an emerging alternative, a clean energy standard that would require a percentage of retail electricity sales to come from non- or low-emitting sources. That approach would affect the power sector and leave emissions from transportation — the nation’s largest contributor to greenhouse gases — untouched.

Rep. Paul Tonko (D-N.Y.), chair of the House Energy and Commerce subcommittee responsible for climate policy and a supporter of economy-wide carbon pricing, said he wouldn’t rule out other options, such as a clean energy standard.

“We need to make certain that we can pass whatever ideas we bring forward, and we’re going to do that with public sentiment behind us,” he told reporters.

They also point to a National Academies of Sciences report this month that endorsed both policies in pursuit of reaching net-zero carbon emissions by 2050.

“We need to work through those ways and find the way that works best and can pass into law and point us towards 1.5 degrees” Celsius, Whitehouse said.

Anthony Adragna contributed to this report.