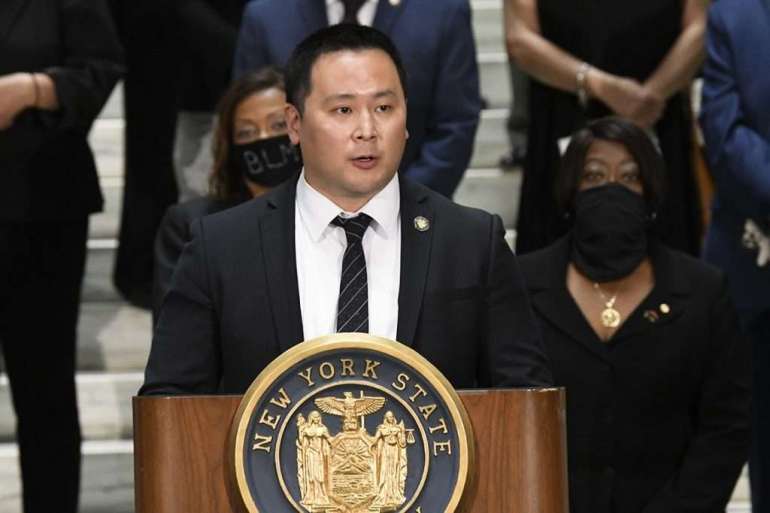 Cuomo’s office released a statement from an adviser to the governor who was with Cuomo for the call, which said Kim was lying about the call.

“At no time did anyone threaten to ‘destroy’ anyone with their ‘wrath’ nor engage in a ‘coverup,’” the statement from the governor’s office said. “That’s beyond the pale and is unfortunately part of a years-long pattern of lies by Mr. Kim against this administration.”

Kim said he hired an attorney after the multiple calls from Cuomo and his staff. Communications from the governor’s office are now directed to that attorney, Kim said.

“It was loud enough for my wife to hear,” Kim said of the call last week. “I tried to shield her, but she was in shock. She didn’t get any sleep that night, and we were terrified. He left a shocking moment for all of us in our family.”

Kim was one of six lawmakers in a meeting in which top gubernatorial staffer Melissa DeRosa, according to Kim, admitted some information about Covid-19 in New York nursing homes had been covered up with the fear it would be weaponized against Cuomo.

Yesterday, Cuomo released a full transcript of the meeting — over 22,000 words — which did not support Kim’s claim that DeRosa admitted to a cover-up by the governor’s office.

In the statement released by the governor’s office, along with the transcript, a Cuomo adviser pointed to a “long, hostile relationship” between Kim and the governor to explain Kim’s statement, adding that decisions about nursing homes in New York were made based on federal policy.

“When we get closer to the truth behind the growing nursing home scandal in New York, Gov. Cuomo tries to implicate you in the cover-up or threatens your livelihood if you don’t lie for him,” Kim said. “The truth is this: Governor Cuomo allowed his top donors to write business-friendly policies, like legal immunity for nursing homes. And he ordered the state government to cover life-and-death information and took away our ability to legislate and change the outcomes of this pandemic.”

“Morning Joe” hosts said they offered Cuomo the opportunity to come on the show to address the claims of a cover-up, but he declined.