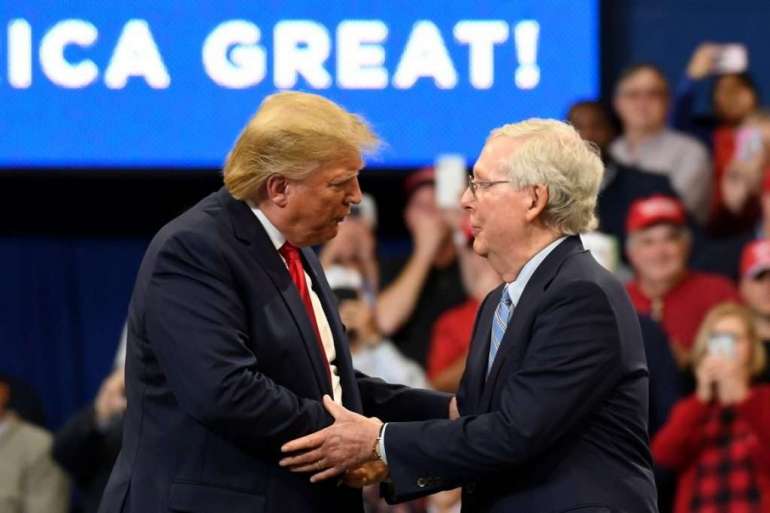 Following Trump’s call for Republicans to move on from McConnell, POLITICO on Wednesday reached out to all 16 Republican senators running for reelection in 2022 to ask if they supported the Kentuckian as majority leader. Only two responded.

“Leader McConnell has my full support and confidence,” Sen. John Thune (R-S.D.), the No. 2 Senate Republican who drew Trump’s ire and a primary threat after condemning the then-president’s refusal to accept the election results, said in a statement to POLITICO. “No one understands the Senate better than he does.”

Other Republicans, meanwhile, spent Wednesday decrying the conflict Trump had stoked the day before but did not criticize the former president, instead emphasizing his role in the GOP.

“If we get into personality squibbles and fights, we are going to be in a challenging place in 2022 and 2024 — which means America will be embracing socialism because we can’t get our act together on the right,” Sen. Tim Scott (R-S.C.), the other 2022 Republican to express support for McConnell as leader, said Wednesday on Fox News, adding that Trump is “the most powerful political figure on either side.”

While no GOP senators have echoed Trump’s attacks on McConnell, some are at least implicitly taking Trump’s side.

“When you look at the polls, if you take a look at Republicans that voted for Trump, would they rather have Mitch McConnell or Donald Trump head of the party — it’s not even a contest,” Sen. Ron Johnson (R-Wis.) told conservative radio host Joe Pagliarulo this week.

McConnell, who voted to acquit Trump in the impeachment trial but lambasted his behavior surrounding the insurrection, has already threatened to wade into GOP primaries to fend off candidates he believes can’t win in a general election. In response, Trump, deplatformed on Twitter, released a lengthy statement Tuesday bashing McConnell and claiming that Republicans who stick with him should be prepared to lose.

It’s not an unfamiliar position for elected Republicans, who have had to deal with Trump’s diatribes against their colleagues and competing interests within the party for the past four years — including spending the two months before the Georgia runoffs claiming, falsely, that the November election was stolen from him. With Trump out of the White House and no longer trying to advance legislation through a McConnell-controlled Senate, it remains an open question whether the GOP can quell the in-fighting this time — or whether Trump even wants to.

McConnell and Trump have had bitter public feuds before, including after the party’s failure to repeal Obamacare and during the contentious Alabama special election. Those spats resolved well ahead of the 2018 midterms, but McConnell made clear in an interview with POLITICO last week that he would back candidates regardless of whether they are supported by Trump.

“The only thing I care about is electability,” he said.

Josh Holmes, a top adviser to McConnell, emphasized the senator’s “guiding principle” is backing candidates who can win. He said there could be “huge overlap” between candidates Trump supports and candidates backed by the Senate GOP infrastructure.

“I think that whether he likes it or not, former President Trump is going to be very impactful on at least Senate races — maybe House races as well — for 2022,” Walker said in an interview.

But Walker said he would be proud to have both Trump and McConnell supporting his campaign, though he insisted it was too early to say whether he’d support McConnell as GOP leader.

“My brand for six years is to be a conservative champion and a bridge-builder,” he said. “I think certain times in D.C., people think you have to sacrifice one or the other. But you don’t.”

But Trump is making it harder for candidates to toe the line. Earlier Wednesday, while paying tribute to the late conservative radio host Rush Limbaugh on Fox News Channel, Trump repeated the false claim that he won the election and again went after Republicans for not backing him up.

Democrats looking to expand their incredibly narrow Senate majority in 2022 think they can benefit from the push-and-pull between Trump and McConnell, which they see as dividing the party in key battlegrounds where control of the chamber will be decided.

“It’s too bad it’s come to this in order to advance a progressive agenda. But I think that Democrats ought to strike while the iron is hot,” said Tom Nelson, a Democrat running for Johnson’s seat in Wisconsin.

It wasn’t until after McConnell published a Wall Street Journal op-ed this week castigating Trump that the former president decided to hit back at the Senate GOP leader. Trump wasn’t happy with McConnell’s weekend rebuke of Trump on the Senate floor, but he saw the op-ed as a bridge too far, according to a person with knowledge of his reaction.

Some Trump advisers were critical of the former president’s broadside, saying he needs to be more surgical in how he engages in primaries against sitting GOP incumbents. So far, he has been largely focused on the House Republicans who supported his impeachment, including Reps. Liz Cheney (R-Wyo.) and Adam Kinzinger (R-Ill.), according to people who have spoken with him.

But people close to the former president say it’s McConnell who made the bigger mistake by starting the fight, even in voting for acquittal. In poking Trump, they argue, McConnell put Republicans in a box, forcing them to choose between Trump — who maintains an iron-like grip on the party’s base — and McConnell.

So far, aides to Republicans facing reelection in 2022 say they’re making the bet that Trump’s threats will be a wash — and that, with months to go until the election season gets into full steam, it’s impossible to know whether any Trump-inspired primaries will materialize. National Republican Senatorial Committee Chair Rick Scott (R-Fla.), who opposed the certification of the election results in Pennsylvania, has been reluctant to criticize the former president, betting that his support will be needed in order for the party to reclaim the majority.

But the Senate map suggests that Republicans could face primary headaches. The GOP is focused on four Democratic-held seats — Arizona, Georgia, Nevada and New Hampshire — and could encounter contested primaries in each. Meanwhile, of the top three seats Democrats are targeting, GOP incumbents are retiring in two of them, North Carolina and Pennsylvania.

“The only way to get through this civil war is to have everyone have command focus on ‘22,” said Scott Reed, a veteran GOP operative. “Focus on recruiting and running candidates based on good Republican policies and ideas, and not make everything a referendum on Trump.”