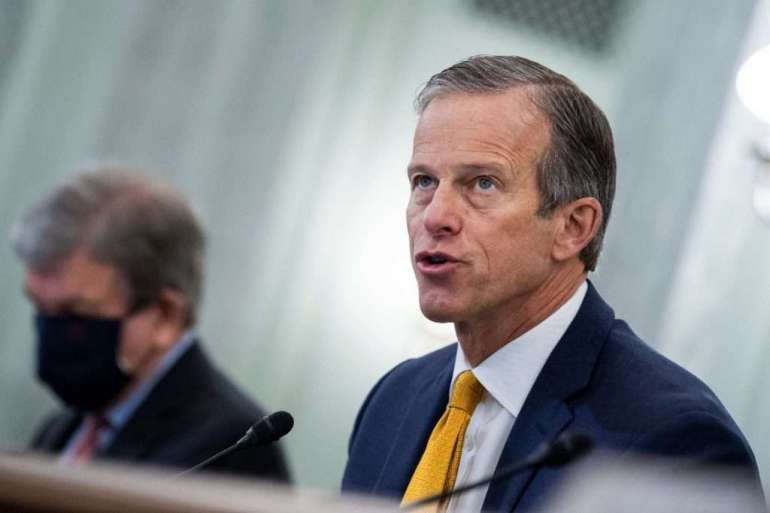 Thune’s remarks were his first explaining his vote in Trump’s trial and assessing the turbulent GOP politics the former president has left behind. Thune, who is facing reelection next year in deeply conservative South Dakota, is among several establishment Republicans grappling with how to reclaim control of a party dominated by Trump and his most ardent supporters for years.

The senator only rarely criticized Trump while he was in office. But he called the former president’s actions after the election “inexcusable” and accused him of undermining the peaceful transfer of power.

Still, Thune last week sided with most Republican senators and GOP Senate leader Mitch McConnell in voting to acquit anyway. Thune and others argued that Trump could not be impeached because he was already out of office. Thune said after his vote that he was concerned with the idea of “punishing a private citizen with the sole intent of disqualifying him from holding future office.” Democrats fell 10 votes short of the 67 need to convict.

Since then, Trump has lashed out at McConnell and repeated the baseless claim that he won the election. The comments have inflamed a feud that is likely to play out in GOP primaries between Trump-backed candidates and those supported by the establishment wing.

Thune suggested he would be taking steps to assist candidates “who don’t go off and talk about conspiracies and that sort of thing.” He praised Rep. Liz Cheney, a Wyoming Republican, who was censured by the Wyoming GOP for voting to impeach Trump, for doing an “exceptional job on most issues” and said he was ready to jump into primary battles like the one she is sure to face.

“At the grassroots level, there’s a lot of people who want to see Trump-like candidates,” he said. “But I think we’re going to be looking for candidates that are electable.”

Thune himself was hit by Trump last year after he said efforts by some GOP members in the U.S. House to reject Electoral College results would “go down like a shot dog” in the Senate. Trump called Thune a “RINO,” meaning Republican In Name Only, and “Mitch’s boy,” in reference to McConnell. The attacks inspired some Trump loyalists in South Dakota to huddle for a primary challenge to the state’s senior senator, whose candidacy has gone unchallenged in previous elections.

On Thursday, the senator attempted to downplay those attacks, likening them to “food fights within the family” that hurt Republicans’ goals, He noted there was no evidence to support Trump’s claim of voter fraud.

“You’ve got to face the music, and at some point, it’s got to be over and you’ve got to move on,” he said, adding, “I think it’s just important to tell people the truth. The most important responsibility of any leader is to define reality.”