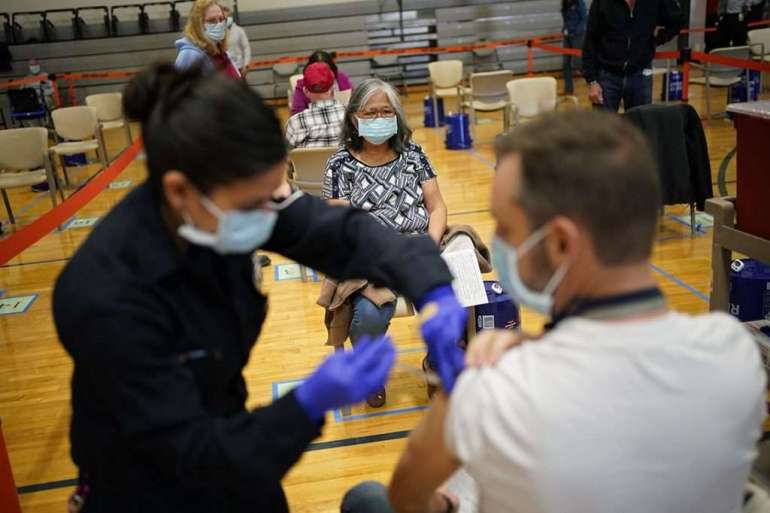 “This whole time, governors have felt like they’re the ones under the gun,” said one adviser to several governors. “They understand the way this has been set up, people are inclined to blame them if things don’t go well.”

Yet the federal government’s charm offensive threatens to bog down Biden’s early efforts to rein in the virus and claim political credit for restoring a sense of normalcy.

The White House has resisted ordering states to let teachers jump the vaccine line, even as it struggles to convince educators to return to school. Biden officials have also held off on criticizing certain governors for easing mask mandates and restrictions on indoor gathering, despite fears that emerging, more contagious Covid-19 variants could fuel a new surge.

And when it comes to shipping out vaccines, the administration is trying to balance efforts to reach nursing homes and communities of color with governors’ complaints that they’re quickly running through their weekly allocations of shots.

“Our strong partnership with states over the last several weeks is helping us vaccinate more people,” a White House spokesperson said, adding that the administration is in constant contact with governors.

Nine governors warned Biden on Monday that federal plans to divert portions of the vaccine supply directly to community health centers and retail pharmacies risked creating further confusion over the inoculation effort — while also setting up state leaders for any public blowback. They pressed the Centers for Disease Control to change the way it displays vaccine data on its public facing dashboard, so it doesn’t appear states are doing a poor job of administering doses that they have no control over.

“Due to the anxiety created by the demand and supply of the vaccine, it is imperative that the American people fully understand the process,” the governors, led by Arkansas Republican Asa Hutchinson and New York Democrat Andrew Cuomo, wrote. “States also need visibility into the federal vaccination efforts at the facility level happening in our borders.”

Cuomo on a private call the next day appealed directly to top White House officials, telling them that states need to know “what’s going where, who controls what and who doesn’t control what,” according to notes of the call obtained by POLITICO.

White House Covid coordinator Jeff Zients acknowledged the complaints and vowed to have health officials weigh the feedback, even as he touted the benefits of the new distribution channels — the kind of diplomatic approach that’s won Zients high marks with governors in his first weeks.

The exchange was further evidence of the shifting relationship as well between the White House and state leaders since Biden took office, with governors emboldened once again to offer frank feedback without worrying they’d be frozen out of the West Wing.

“One change for sure is that people feel free to express their points of view regardless,” said the adviser to several governors, alluding to GOP governors fear of antagonizing former President Donald Trump.

But it’s also an acknowledgment that the White House has little direct control over how vaccines are distributed or when schools reopen, even as they’ve become vital criteria with which to measure Biden’s first year.

A few weeks ago, it looked like Andrew Cuomo was on track to break a New York curse and make it past a third term in office. But now, roiled in a Covid scandal, his political future is looking less certain.

States are responsible for distributing and administering the vast majority of vaccine doses each week. Resuming in-class learning has devolved into a district-by-district negotiation across swaths of the country, putting Biden’s pledge to reopen the majority of K-8 schools by April 30 into the hands of governors, mayors and superintendents.

And while the White House has sought to draw a sharp distinction between its wide-ranging efforts to end the pandemic and the prior administration’s rocky response, Biden aides have privately fretted over the political danger of failing to meet their own self-imposed deadlines.

“We have to get the pandemic under control and get the economy moving again,” a White House official said.

The Biden administration in recent weeks has pressed its case in private meetings and phone calls, hoping to win over state officials while avoiding the potential for public blowups that could derail its ambitions and further politicize the Covid response.

“The CDC made it clear that essential workers — educators — should be prioritized,” said Randi Weingarten, president of the American Federation of Teachers and a close Biden ally on reopenings. “It’s the states that are now in charge of making these decisions.”

During one meeting with governors and mayors of both parties last week, Biden stressed the toll that school closures have taken on families — particularly working mothers who have had to balance their jobs and childcare. He’s also dispatched officials from the Department of Education and CDC to enlist national, state and local groups — from school system leaders down to individual school boards, counselors, psychologists and social workers — to participate in reopening conversations.

Dating back to the transition, the White House kept in frequent contact with New York public schools in particular, which in September became the first large school district in the country to open its doors.

“He’s taking this very forward-leaning position, knowing full well that he does not control the levers,” said a high-ranking state Democrat in touch with the administration on the schools issue.

The White House has separately instituted a series of weekly calls with state officials to troubleshoot pandemic response problems and push its initiatives, including a Tuesday all-governors session and a separate set of meetings with states grouped by region, according to multiple sources.

Those regional calls pull in officials from across the government to work through state-specific issues like vaccine supply and medical staffing. Zients and Andy Slavitt, a senior adviser for the response, often serve as primary points of contact for individual state leaders, in addition to members of the White House’s intergovernmental affairs office.

Taken together, officials from one state told POLITICO they were in touch with the administration on Covid or school reopenings at least once a day.

“It’s not a very top-down structure anymore,” said George Helmy, chief of staff to New Jersey Democratic Gov. Phil Murphy, who stood out among Democrats for his comparatively strong relationship with Trump. “They understand that we’re the ones on the ground who are best able to tell them what our implementation challenges are.”

Still, the White House has taken longer than expected to line up its public messaging — leaving it on the defensive as Republicans step up their attacks over the failure to reopen schools and frustrating some allies who warn that Biden will soon need to take a stronger stand.

One senior Democratic official close to the discussions between the White House and the states said the administration was taken aback by the initial pushback on reopening from some districts. But that should serve as a wakeup call, the official said, that Biden will need to be more forceful — even at the risk of rankling some governors.

“There are policy choices you have to make here, and if one is ‘we want schools open,’ then go and vaccinate teachers,” the official said. “There’s no winning on these things. You have to make a decision and then you have to move forward.”

Natasha Korecki contributed to this report.