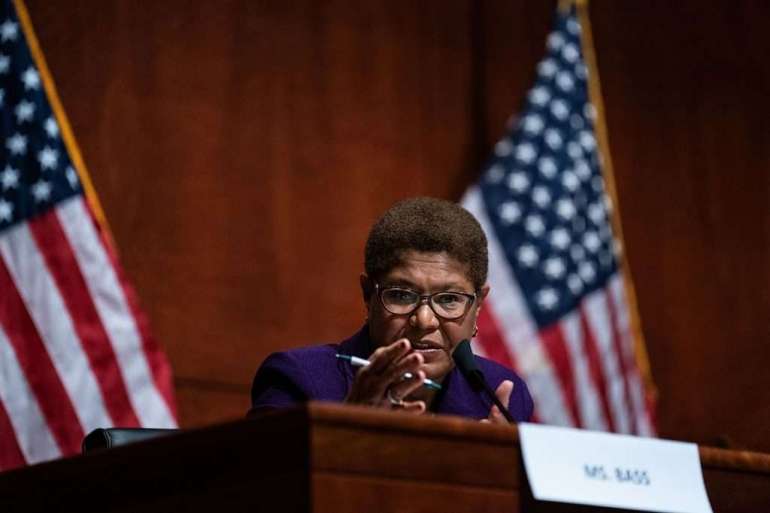 “This issue is far too important to just have a messaging bill. We need this to get to the president’s desk,” said Rep. Josh Gottheimer (D-N.J.), who leads the bipartisan Problem Solvers Caucus and was part of cross-aisle negotiations on the Democrats’ policing bill last summer.

The internal dispute over so-called “qualified immunity” is threatening to trip up the policing bill’s path to passage before Democratic leaders even put it on the floor, delivering on a high priority for progressives and the Congressional Black Caucus.

Rep. Karen Bass (D-Calif.), the lead author of Democrats’ policing bill and former CBC chair, said she will not entertain changes to the legislation until after it passes the House next week. She also warned her party’s centrists against prioritizing their own reelections over protections for Black Americans killed by police.

“If we start negotiating before getting the bill out of the House, we won’t have a bill,” Bass said Tuesday.

“I don’t know how many more people need to be killed,” she added. “I don’t think that you pass legislation or support legislation based on your fear of a future campaign ad.”

The group of moderate Democrats objecting to the provision, which includes between six and a dozen of the caucus’s most vulnerable members, has privately argued that passing a partisan bill tanks any real chance at constructive talks with Republicans down the road, robbing the bill of the 60 Senate votes needed for passage. Some of those members have taken their complaints directly to House Majority Leader Steny Hoyer in recent days.

Given House Democrats’ five-vote majority, just a handful of them could join together and sink any bill on the floor. But Gottheimer and other centrists uneasy with the current policing bill insist they aren’t ready to do that, saying they prefer to work behind the scenes to reach a compromise rather than pick a nasty fight on the floor over an issue that the GOP trashed them for last fall with “defund the police” ads.

Gottheimer declined to say whether he and others would be willing to bring down the bill on the floor: “I’m really hoping before this gets to the floor that we can work together and produce a bill that can get 60 votes in the Senate.”

Rep. Tom O’Halleran (D-Ariz.), a former homicide detective with the Chicago Police Department, also backs modifying the qualified immunity provision, noting that it’s one of the only issues that police chiefs in his district have raised as an issue in the entire bill. “I spent a lot of time out there, and it’s a dangerous environment. And I don’t want an officer’s family overly worried. But I also want a mother and father to know that their children are safe on the streets,” O’Halleran said in an interview Tuesday

At least one Republican who voted for the Democrats’ policing bill last summer — Rep. Fred Upton (R-Mich.) — does not plan to support the bill without a fix to the qualified immunity provision, according to his office. The only other sitting Republican who supported the 2020 measure, Rep. Brian Fitzpatrick (R-Pa.), did not return a request for comment but is expected to take the same position.

Meanwhile, Bass asserts that she’s open to further discussions after the bill moves to the Senate. In the meantime, the California Democrat said she’s reached out to many of the caucus’ moderates without getting any significant pushback, and even some Republicans.

The dilemma over how House Democratic moderates can best exert their leverage – while trying to prevent a further depletion of their ranks in the next election – underscores a fundamental difference between the rabble-rousers in the two parties. While far-right firebrands haven’t hesitated to publicly take on Republican leadership and take down legislation, Democrats have never been comfortable deploying their power in that way, even when they can.

And the threat of primary challenges from the left looms large in some Democratic moderates’ minds, prompting them to try to privately shape their party’s high-profile bills before ideological divisions spill out into a messy public feud.

The issue now in dispute — a legal doctrine that essentially shields police officers from civil lawsuits — has been a key demand for racial justice activists since the death of George Floyd triggered nationwide protests last summer. Qualified immunity protection, critics say, makes it nearly impossible to hold police officers accountable for monetary damages for crimes committed on the job.

But some moderate Democrats, as well as many Republicans, have argued that ending qualified immunity entirely could leave police officers vulnerable to frivolous lawsuits. And both sides acknowledge that any bipartisan deal on police reform is unlikely to fully end the doctrine, at least in its current form.

“The definition of qualified immunity is really important. it depends on how you define it,” said Sen. Tim Scott (R-S.C.), the lead author of Republicans’ policing proposal last Congress. “I think making it easier for families to get retribution or restoration financially is a good thing. Demonizing police officers is a bad thing.”

Moderate Democrats have proposed some ways to alter the bill’s qualified immunity language, including holding police departments rather than individual officers liable in lawsuits. Some have cited a new law in Colorado, which limits officers’ personal financial liability.

But many senior Democrats acknowledge it’s likely too late to amend the bill, which will be fast-tracked to the House floor next week under a rule that allows expedited consideration for bills passed in the last Congress.

The vast majority of Democrats remain firmly behind the legislation and have begun pitching it to the caucus’s new members as well. Bass and House Democratic Caucus Chairman Hakeem Jeffries (D-N.Y.) briefed a group of freshmen on it on Monday night, part of a regular meeting hosted by Assistant Speaker Katherine Clark (D-Mass.). No members raised concerns about qualified immunity, according to a person familiar with the discussion.

Still, both Bass and Scott have signaled a willingness to compromise on the issue in the final bill, which will require at least 10 Senate Republican votes to make it to Biden’s desk. The bipartisan duo has resumed private discussions they began last summer — along with the leading Senate Democrat on policing, New Jersey’s Cory Booker — in the hopes of reaching a compromise this year.

Last summer’s policing debate largely lacked drama on the Democratic side, with every House Democrat supporting the bill on the floor in June.

But then came November, when Democrats lost 14 seats in the House — even as their party won back the White House and Senate — with several blaming it on a GOP onslaught of “defund the police” and related “law and order” attacks. Bass and others have disputed this notion, saying Republicans also tried to broadly paint Democrats as “socialists” with mixed success.

The trickier parts of the policing debate have come roaring back as Democrats, now in control of all of Washington, attempt to deliver on a critical party promise while also finding compromise with at least some Senate Republicans.

Democratic leaders have agreed to start by re-passing last summer’s bill, but their moderates argue that the dynamics from last summer have dramatically changed, including the party’s tighter majority and the prospect of their bills actually being signed into law.

“It’s in the bill because I think it’s really, really important. But I don’t want to start talking about where this might land,” Booker said Tuesday when asked if ending qualified immunity was still a requirement for him.